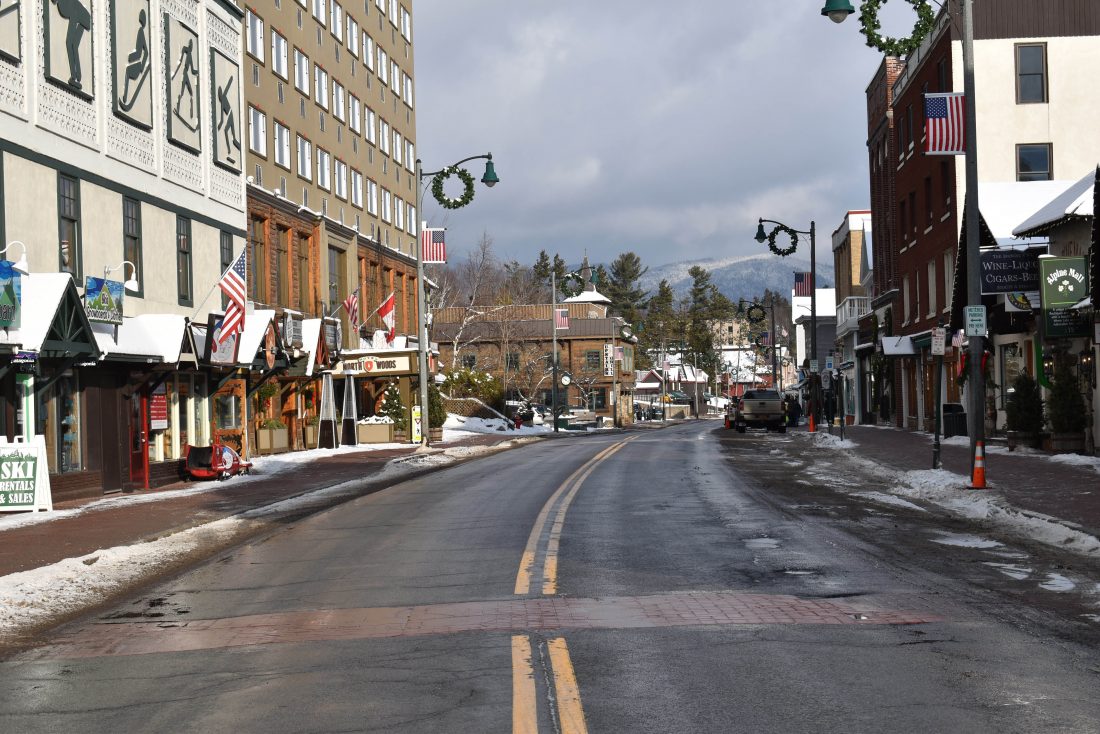 LAKE PLACID — Lake Placid business owners are rallying together to plan how they’ll sustain their businesses as Main Street is overhauled.

Members of the Lake Placid Business Association on Tuesday discussed forming subcommittees to discuss alternatives to the proposed Main Street streetscape redesign, the association’s response to the project as proposed, and ways to help businesses survive throughout the projected two- to three-year construction period.

“Let’s be honest: People are going to avoid the chaos.”

Village officials have been planning an $8 million overhaul of the Main Street streetscape and underlying water infrastructure for years. Plans include the installation of new water pipes to improve service capacity, bioretention basins to help filter salt and other pollutants out of stormwater runoff before it flows into Mirror Lake, and a redesign of the streetscape — including new sidewalks, green space and crosswalk bump-outs. A volunteer Main Street task force, appointed by the mayor, was brought into the planning process late last year.

Mayor Craig Randall has said a separate subcommittee is discussing potential changes to the upper municipal lot across from NBT Bank that could allow the village to add more parking spaces there. In an interview last week, he said the village hopes to complete work on that lot before the Main Street project enters the construction phase.

The village originally planned to go out to bid next month and move into the construction phase in May. Now, according to town engineer Ivan Zdrahal, the plan is to put the project out to bid in June — and move construction by mid-September. Most of the project is now slated for completion by November 2022. It’s supposed to be done before Lake Placid hosts the Winter World University Games in early 2023.

Multiple downtown business owners have expressed concern that the proposed removal of some on-street parking spaces would exacerbate an already cumbersome parking crunch, and that the project’s expected construction period could bankrupt businesses by deterring visitors.

Wayne Johnston, co-owner of Ruthie’s Run clothing store, questioned why other options aren’t being looked at.

“It’s not just parking; it’s also access to these buildings,” he said Tuesday. “Why isn’t there any look at alternative designs at (the Saranac Avenue) intersection?”

The village plans to install a bioretention basin at Brewster Park, altering both the Saranac Avenue intersection and surrounding elevation, necessitating the removal of some parking spaces on the north end of Main Street.

LPBA President Tim Robinson, who represents the association on the Main Street task force, said a letter outlining the Main Street design has already been submitted to the state Department of Transportation. The DOT has to sign off on the plans because Main Street is part of Route 86, a state road. The village Board of Trustees also has to approve the plans.

Robinson suggested the LPBA put together a subcommittee that could inform him and other members of the Main Street task force of possible alternatives to the intersection redesign, and the LPBA’s response to proposed changes. He also suggested the village hire a dedicated liaison to keep business owners up to date on the construction schedule and what to expect as the project progresses.

Robinson said the Main Street project is going to be “painful” for business owners with storefronts there.

“It does look nice,” he said of the design for the finished product. “It’s just getting to that point where it’s going to be painful.”

Planning for the future

Fitzgerald said she believes encouraging people in surrounding communities to shop on Main Street is going to be key as construction progresses.

“We need to convince our neighbors to come to Main Street,” she said.

Whatever the concerns are with the project, she said moving toward having a plan for helping businesses survive is necessary.

“We need to come up with solutions and strategies,” Fitzgerald said.

Business owners interested in serving on the LPBA’s subcommittees on the Main Street redesign — whether members of the LPBA or not — are encouraged to contact Robinson at 518-335-1378 or lpbaofficers@gmail.com. The LPBA is also currently accepting new members. Membership dues are $40 per year. The next LPBA meeting is at 8 a.m. on Tuesday, March 10 at the Northwood School Innovation Hub, 2945 Main St.