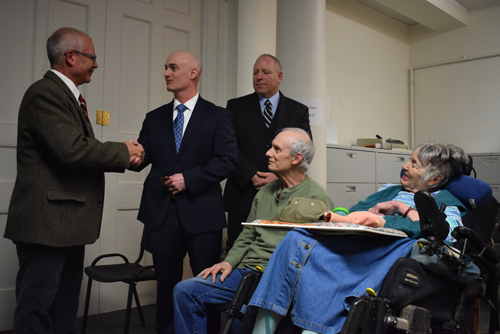 SARANAC LAKE — Village police Sgt. James Joyce was promoted to chief at Monday night’s village board meeting. Current Chief Chuck Potthast is retiring from the role, and Joyce will take over on March 5.

“It’s going to be a smooth transition with James coming into the position,” Potthast said. “He’s got the respect of the men. He has the right temperament, and I know he cares a great deal for the village. I know he’s the right pick for the job.”

At the meeting, Joyce was accompanied by his mother and father, Bonnie and Mike. Village Mayor Clyde Rabideau presented Joyce with a new shield.

“This is called a shield. It’s also a badge, but not all badges are shields,” Rabideau said. “A shield protects and defends, and I’m sure you will protect and defend the village of Saranac Lake to the best of your abilities.”

Joyce, 43, is a Saranac Lake native and has been a member of the police department since 2006. He said being promoted to chief is humbling and he looks forward to the job.

“My role will be making sure that the officers have what they need to do the job that continually gets more and more complicated,” he said. “That’s equipment, training and supporting the mission of the law enforcement at the local level.”

Potthast has been chief of the village police department for the past five years. Before that, he was a state trooper for 20 years. He said he doesn’t have any plans going forward.

He said Joyce will have to become acclimated with new state laws.

“The no-bail laws, the new discovery,” Potthast said, “but we’ve already put things in place to address those issues, so I don’t see anything out of the box coming up.”

At the start of the new year, the state eliminated cash bail for most misdemeanors and class E felonies. Instead of awaiting trial in jail or paying bail to be free until trial, the person charged will be released with an appearance ticket to await trial at home, regardless of whether they can afford bail. With the new discovery law, prosecutors have to automatically hand over all relevant information to a defendant’s case It also has to be done on an earlier timeline that puts pressure on police to file case documentation sooner. It used to be that defendants had to file requests for the information.

Ticket deadline for 29th annual Ice Out Benefit is April 1