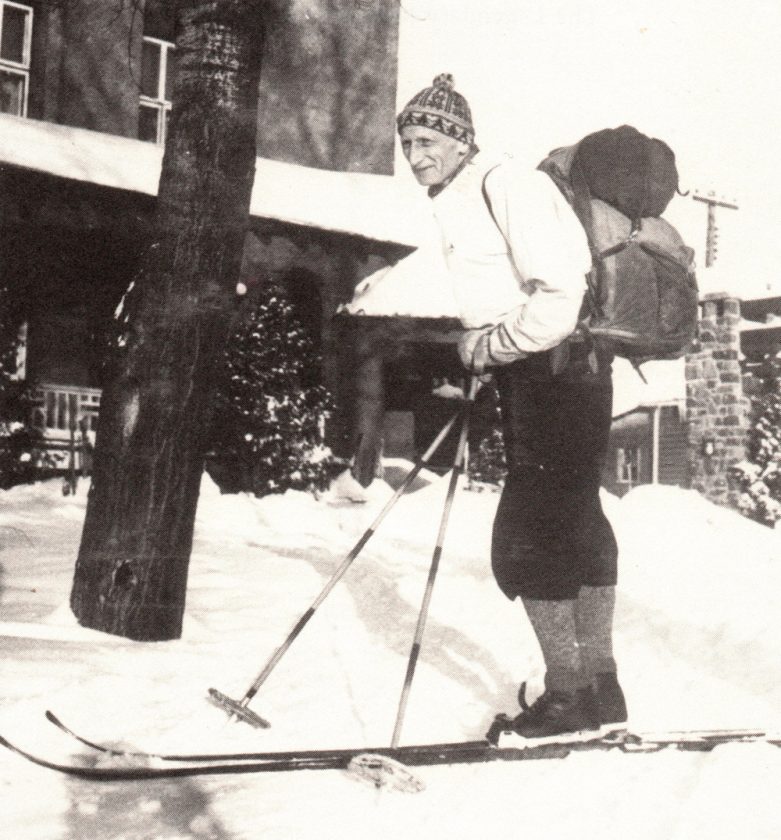 Herman “Jack Rabbit” Johannsen spent most of his life as an avid cross-country skier, skiing until he was 108 years old. The Jackrabbit Trail was named after him because of his love for Adirondack trails. (Photo provided)

SARANAC LAKE — It all started with a letter to the editor.

Today, the Jackrabbit Trail is one of the most popular cross-country skiing treks in the area. It is a bright red and yellow line streaking across the Green Goat winter trails map, connecting towns and ski centers to each other.

The idea got its legs in 1985, when Dieter Heckmann, a seasonal visitor from Germany and vice president of the World Masters Cross-Country Ski Association, wrote a letter to the editor in the Lake Placid News.

Now, with the recent finalization of the Sentinel Range Unit Management Plan by the state Department of Environmental Conservation, there are improvements coming to the 34-year-old trail as the Barkeater Trails Alliance, the organization which maintains and manages the Jackrabbit Trail, plans to make traveling the entire length of the trail a smoother trip.

The 42-mile trail now winds its way from near the Pitchoff Cliffs in Keene to the Paul Smith’s College Visitor Interpretive Center in Paul Smiths. Along the way, it passes through Lake Placid, Saranac Lake and many of the area’s major ski trail systems: Cascade X-C Ski Center, Craig Wood Golf Course, the Lake Placid Club, the Peninsula Trails and trails at the VIC. It also passes within walking distance of ski centers at Mount Van Hovenberg and John Brown’s Farm. 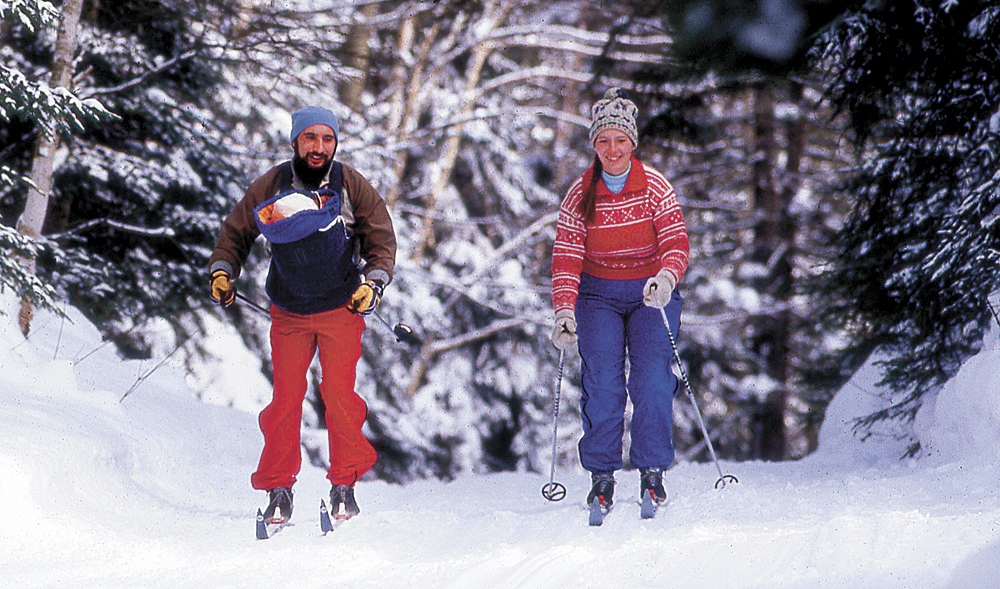 Mark Ippolito, founding president of the Adirondack Ski Touring Council, with his wife Penny and infant son Jon, ski toward South Meadow Farm on the day of the Jackrabbit Trail’s dedication in 1987. (Provided photo — Nancie Battaglia)

Heckmann’s original proposal was to make Lake Placid a bigger cross-country ski destination by styling its trail systems similar to places in Scandinavia and Europe where trails run adjacent to lodging and branch from residential areas, leading to larger trail systems.

Using Mirror Lake as a starting point, he proposed a network of trails heading to all the major ski areas. 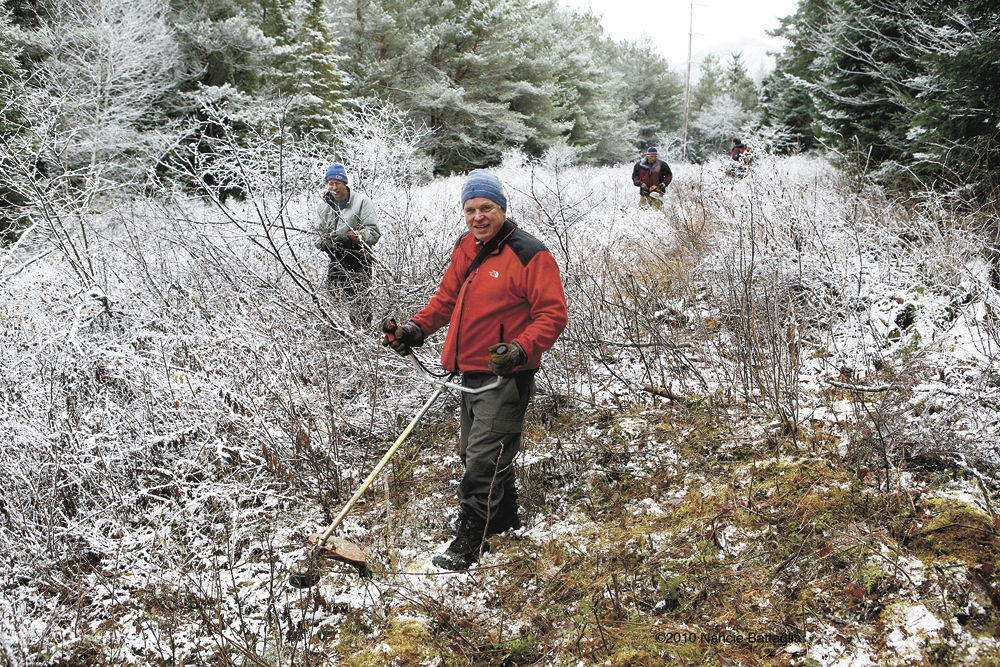 Tony Goodwin and a crew of other Jackrabbit Trail volunteers clear brush on the trail. (Provided photo — Nancie Battaglia)

Ed Damp, Chairman of the Lake Placid Sports Council, read the letter and thought it was a great idea. He set up signage directing people from downtown Lake Placid across frozen lakes to Whiteface Inn Lane to where they could ski to Saranac Lake.

“That letter and Ed Damp’s response got a number of us thinking,” former Adirondack Ski Touring Council executive director Tony Goodwin said. “We had a couple of meetings of active local cross-country skiers and said, ‘Gee, I think we could probably tie this whole thing together if we set our minds to it.'”

So they founded the Adirondack Ski Touring Council.

“There was a lot of excitement,” Goodwin said.

At the time, there was nothing else like the Jackrabbit trail in the area. 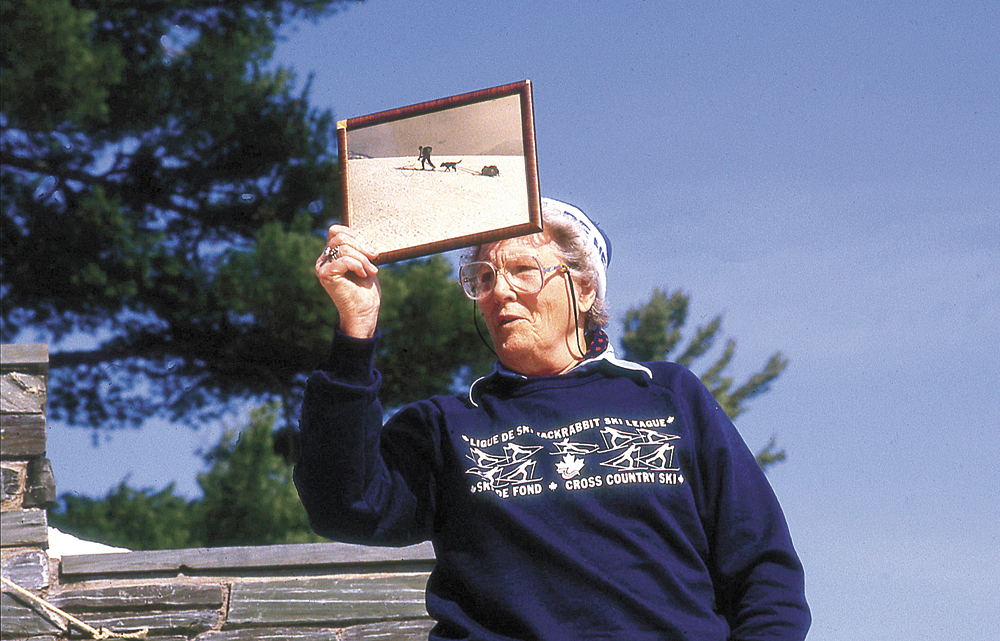 Alice Johannsen holds up a photo of her father Herman “Jack Rabbit” Johannsen, whom the Jackrabbit Trail is named for, traveling on ski with a dog and sled on the opening day of the trail in 1987. (Provided photo — Nancie Battaglia)

“Going back to the good old days of the 1930s and ’40s there were quite a few trails like this that had either not been maintained, or development had built houses right across where the trails were,” Goodwin said.

In 1986 the council mapped the first stretch of the trail, from Lake Placid to Keene, on existing trails and golf courses. In several places, though, the trail crossed private land.

The landowners whose property the trail passed through had to be convinced to allow the trail. Goodwin said the council spent a lot of time explaining that they would not be liable if someone got hurt on the trail on their property. State General Obligations Law can protect landowners from liability for non-paying recreationalists on their property. 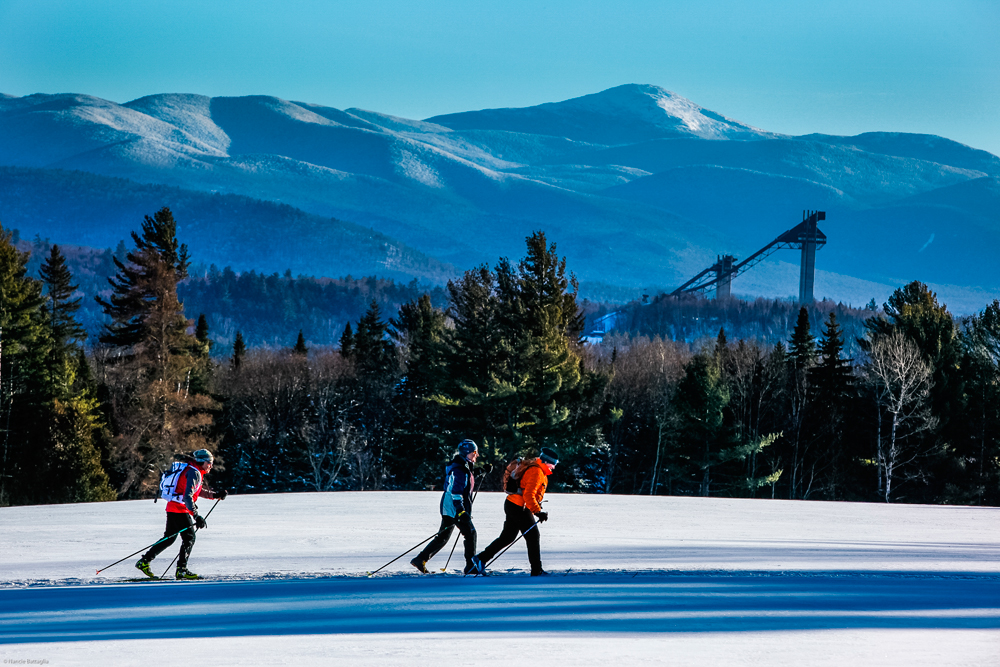 Eventually, all the landowners agreed and Goodwin said the trail still relies on these private landowners allowing access on their lands.

All there was left to do was name it.

Goodwin said a contest to solicit name suggestions was curtailed when he read an article in Cross-Country Skier Magazine about Herman “Jack Rabbit” Johannsen, a legendary Norwegian cross-country skier who lived for a spell in Lake Placid.

Goodwin said Johannsen embodied the spirit of the trail; frequently skiing from lodging to the wilderness, and back again. Johannsen was known to ski from the Lake Placid Club to the summit of Mount Marcy in a day — a round-trip of more than 30 miles. He was skiing even when he was 108 years old.

The Jackrabbit Trail was dedicated in March 1987. Johannsen himself died two months earlier at the age of 111. His daughter Alice, who was 75 at the time, attended the ceremony to share stories of her father’s adventures and cut the ribbon on the trail. She said she had brought him the news of his legacy being carried on in the trail name just weeks before his death. 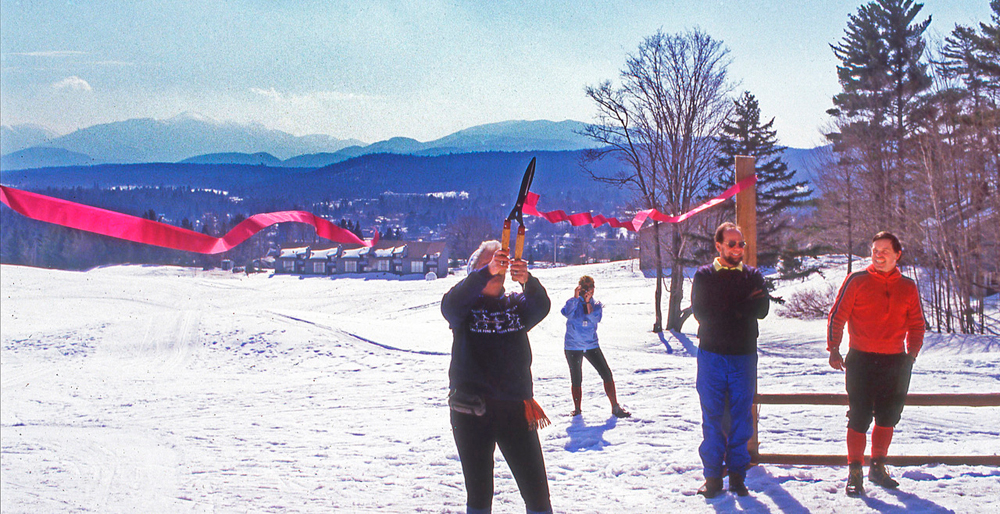 That year, the volunteer crews cleared the route from Whiteface Inn Lane to McKenzie Pond Road, a path that had not been maintained in many years.

That same year, the trail from Saranac Lake to Lake Clear was also established. The last leg of the current trail, from the Lake Clear Junction to the VIC, was finished in 1994.

The original plan for the trail was for it to end in Tupper Lake. This would have taken it through the Saranac Lakes Wild Forest, and needed to be included in that land’s UMP. The UMP was taking too long to pass back then, Goodwin said, so they compromised for an end in Paul Smiths. That UMP was not passed until 2019.

In 2014, the Adirondack Ski Touring Council combined forces with the Barkeater Trails Alliance — which had been around since 2009 — and adopted BETA’s name. The expanded organization is now responsible for the stewardship of the Jackrabbit Trail.

BETA Executive Director Josh Wilson took over the leadership role from Goodwin around that same time.

“It was pretty big shoes to fill,” Wilson said. “I ask myself, ‘What would Tony do?'”

In 1994 Jim Grant wrote about his experience skiing the length of the trail — at the time, Keene to Saranac Lake — for the New York Times. He said the trail offered “nearly guaranteed solitude.”

That is less true today.

While it still leads deep into the wilderness, on days with good weather and plenty of snow the Jackrabbit Trail is hopping.

Wilson said BETA does not keep data on how many people use the trail in a day or a season, but anecdotally, he sees and hears of a lot.

“You have to be pretty quick to get out right after a storm to break trail,” Wilson said.

The trail is close to what Heckmann envisioned — linking Nordic ski centers with residential areas — and it’s true to the style of skiing “Jack Rabbit” Johannsen says led to his long life.

Wilson said he likes how versatile the trail is. It can be used however someone wants to use it.

He said it makes the backcounty accessible. It can be skied on its own or as a route to other ski centers. It can be skied in sections, and skiers have several options of towns to stop in during their trip.

“That’s what’s so cool about the trail,” Wilson said. “The most popular areas are kind of naturally in the wilderness, where you have these long stretches of really good trail.”

The trail can be skied in sections or thru-skied. It is a connector route, winding through some of the region’s denser wilderness, and it is a popular destination for locals and visitors alike.

The Saranac Lakes Wild Forest UMP, as well as the Sentinel Range Wilderness UMP passed last week, allowed what Wilson called the “first real addition to the trail in a long time” to begin this year.

Goodwin said the last addition to the trail was 15 years ago — a route connecting River Road to the Lake Placid Club golf course, staying in the woods, off the wind-swept courses.

Wilson said BETA has been trying for 15 years to get permission for a bypass of the Mountain Lane road. Over the years that road has become more populated as people build homes there. Now it is plowed and sanded, which is not great for skiing.

With the UMP passage, BETA volunteers and paid trail crew will likely soon be authorized to do the trail work.

Wilson said this bypass will take several years to build and it still needs DEC permits.

“Even though it’s approved in the UMP and the DEC has adopted the plan, we still have to get a work plan every time we cut a trail,” Wilson said.

The Sentinel Range Wilderness UMP also proposes an offshoot ski trail around Scotts Cobble, across from Cascade X-C Ski Center. The DEC initially proposed another parking lot for that trail, but Wilson said BETA was able to convince them to attach it to the Jackrabbit Trail.

Wilson said there are currently no extensions planned on either end of the trail.

He said when additions or reroutes are done on the trail they are added to the Green Goat winter trails map, the definitive map for the Jackrabbit Trail. The trail spans both sides of the map, running through the heart of the mapped region and connecting many of its landmarks.

Wilson said occasionally people thru-ski the trail end-to-end, but that he does not hear about it often. He said since the sections between Saranac Lake and Keene are more popular and entertaining than the others, they get the most usage.

Last Sunday, Jan. 2, Wilson skied the length of the whole trail in one day for the first time. Wilson is training for the 100-mile, two-day Canadian Ski Marathon, an annual event that follows the path “Jack Rabbit” Johannsen skied annually. 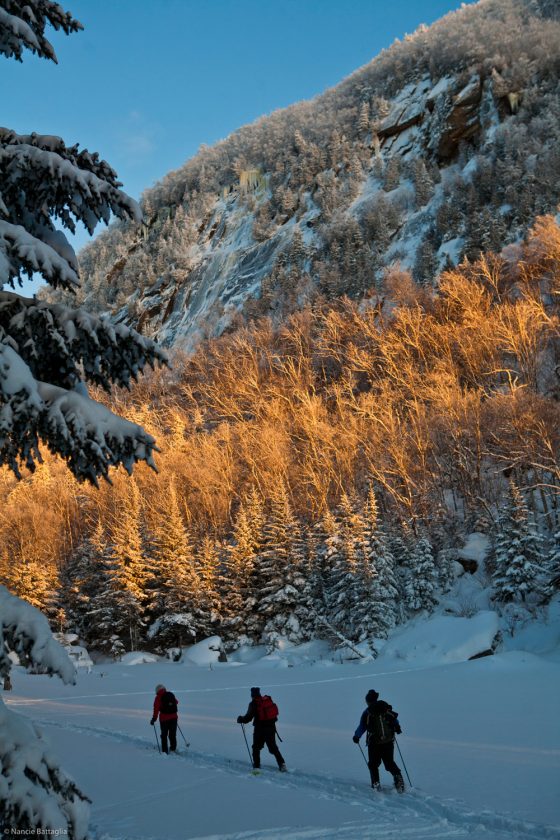 A group of skiers on the Jackrabbit Trail pass below the cliffs of Pitchoff Mountain. (Provided photo — Nancie Battaglia)