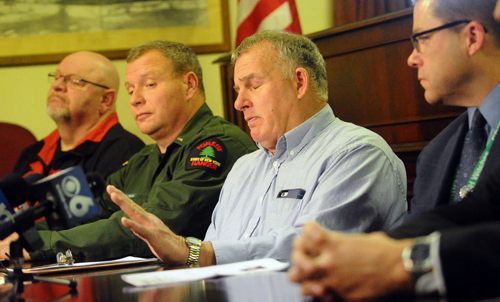 State forest ranger Capt. John Solan, center in the green uniform, is seen at a 2016 press conference in Greenwich. Solan will oversee all the state’s forest rangers for the Department of Environmental Conservation. (Provided photo — The Post-Star)

A Greenwich man who has supervised forest rangers around the region for nearly two decades was promoted this month to lead all of the state’s rangers.

John Solan, a captain with the state Department of Environmental Conservation, was named acting state director of the DEC’s Division of Forest Protection after Eric Lahr retired from the position as of Jan. 31. He will oversee the state’s 141 forest rangers.

The DEC’s press office would not make Solan available for an interview last week, releasing only a one-paragraph biographical statement acknowledging the appointment when an interview was requested.

State Forest Ranger Scott van Laer, head of the union that represents the rangers, said the state’s rangers were “excited” about Solan’s promotion.

“We feel that his skills and experience will translate well into this position,” Van Laer said. “John spent decades as a lieutenant in region 5. There he was a direct supervisor of rangers yet he made a point to work right alongside his staff on fires, searches and daily patrols. He managed complex multiagency incidents where problem solving, consensus building and team work were crucial to success. His leadership style has always been mentoring in nature and focused on goals. John has always been a great ranger and the rangers look forward to continuing to follow his direction, now as the states chief ranger.”

Solan, 49, began his DEC career in 1991 as a seasonal assistant ranger for summer activity at the Lake George Day Use Area in Fort Ann, known locally as Shelving Rock.

He moved on to become a full-time ranger in 1994 and for the last 18 years served as a lieutenant in charge of rangers in Saratoga and Washington counties.

He was a regular presence at any search and wildfire-fighting efforts in the two counties for decades, and also coordinated years of search efforts for missing Greenwich 12-year-old Jaliek Rainwalker.

Solan also supervised the annual forest ranger response to the troublesome “Log Bay Day” party that was formerly held on Lake George each summer before the state shut it down in 2017 after a fatal boat crash.

He was promoted to captain last fall.

Solan takes over as the top forest ranger at a time when many are pushing for the state to hire more rangers, as the DEC deals with more rescue and assistance calls from hikers and others as use of the backcountry has increased.