Tupper Lake High School students will submit their film “The Ranchening” to this year’s Beyond the Peaks Student Film Festival. (Poster provided) 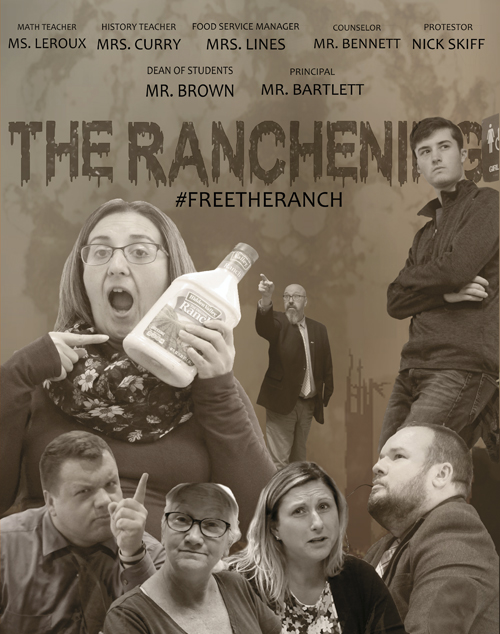 Tupper Lake High School students will submit their film “The Ranchening” to this year’s Beyond the Peaks Student Film Festival. (Poster provided)

TUPPER LAKE — When the lights flicked back on at Monday’s Tupper Lake Central School District board meeting, the board broke into applause. The premiere of “The Ranchening” was a success.

The six-minute short film is students’ telling of Tupper Lake High School’s infamous 2019 “ranch riots.” It is also one of their submissions for the second Beyond the Peaks Student Film Festival, which will be hosted by the school and AdkAction at the Wild Center nature museum this spring.

Wendy Cross, who teaches film and other visual arts at the high school, said she expects the festival to grow larger in its second year.

Three of the film’s directors were at the premiere. Hayley Denis and Mackenzie Burnett, both in 11th grade, and William Strack, a 10th-grader, have all taken Cross’ class for several years. Strack and Burnett won first place in the animation category last year, and Strack and Denis spoke at the Lake Placid Film Festival in October. 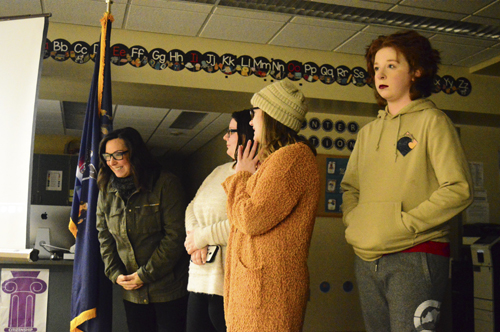 Today they will meet with Cameron Audia of the Connecticut Red Carpet Film Festival to learn more about script writing, camera movements and set design. Students from the Colton-Pierrepont and Keene school districts are also attending the film workshop, looking to spruce up their entries before the April 8 deadline.

Last year there were 50 submissions to the film festival. Cross said more districts are likely to submit this year.

AdkAction approached Cross with the film festival idea three years ago — before she even started her first day at the school — and she knew she wanted to use Tupper Lake’s film program to host it. After organizing the festival with the help of her students, who modeled it after the Connecticut Red Carpet Film Festival and gave it its Adirondack-themed title, the Wild Center hosted the event last May.

School district Superintendent Seth McGowan said it was like the Adirondacks’ Academy Awards, with a red carpet, awards and lots of unique films.

“Nobody in (AdkAction) was imagining anything as extensive as this,” McGowan said. “Wendy just took it and ran and made it into the event that it is.”

Cross said other locations were considered for the second year, but she solidified it to be held at the Wild Center in Tupper Lake.

“It will always be here,” Cross said.

This year the Lake Placid Institute is giving the festival $8,000 and is partnering with Beyond the Peaks to bring in more film submissions.

“The Ranchening” is a dramatic retelling of a school coming to grips with smaller condiment sizes in the cafeteria.

When the cafeteria changed its ranch dressing portion sizes last year, it sent shock waves through the school community. The film focuses on the protesting students, the frustrated teachers and the administrators caught between it all.

It features performances from some of the real-life players in the ordeal, including Principal Russ Bartlett.

The board and all attending Monday’s meeting laughed throughout the entire duration of the short. Sometimes it was a funny quote about ranch that got them chuckling, sometimes a standout performance from a student delivering a line. Sometimes it was just a camera angle or a well-timed sound effect.

The board complemented the students and said they were impressed.

The students started work on this film in September and put a lot of work into it, Cross said. She said she enjoys teaching students how to film things because “they’re doing it anyway,” on their smartphones. She gets to teach them how to really tell a story, which she said in a small town can open doors for them.

Cross said she has had two students who graduated in the past two years go on to major in film at SUNY Plattsburgh.

And what is the state of the ranch dressing supply in the school cafeteria now? Cross said the portion size “depends on the day.”