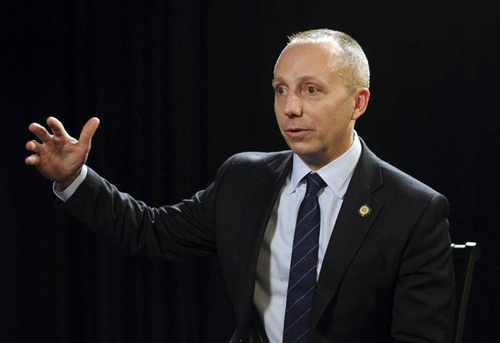 He mentioned specifically the $3 billion environmental bond act, a “Restore Mother Nature” initiative that, with voter approval, would give the state resources to begin controlling floodwaters more effectively by restoring and improving landscape.

“New York was built for a different time when you had just a different climate and you had less severe storms,” Seggos said. “Now, with these resources, we’re going to begin adapting the state in conjunction with all the communities that are suffering from repeated storms or lack of open space or lack of access to nature.”

And that would reduce the costs the state would suffer when a severe storm does occur, he added.

The governor also hopes to appropriate $300 million into the Environmental Protection Fund.

That and the bond act are part of his $33 billion plan to combat climate change over the next five years.

“In this time when the governor is trying to balance a $6 billion deficit, to have this much attention going onto the environment, it’s unprecedented,” Seggos said.

Landscape restoration and improvement in the North Country could include a culvert modernization program that would involve the state Department of Transportation putting in appropriately sized culverts as it works on roads, Seggos said.

He pointed out that when storms like Hurricane Irene came through, stormwaters would come through and blow out culverts too small to handle them.

Seggos argued that right-sizing culverts has a dual benefit, allowing floodwaters to flow underneath and fish and other species to more easily transit up.

“You’re improving not only the flood conditions, but you’re also improving habitat and then the economy that depends on that, like fishing and hunting.”

The state could also restore wetlands, which are cheaper to create and repair than traditional infrastructure, and slow the flow of floodwaters, Seggos said.

Asked whether the proposed addition of 47 DEC staff members would translate to more forest rangers assigned to the Adirondacks’ High Peaks region, Seggos said the new staffing is going to be directed toward climate work over the coming year.

He explained that hiring of rangers is usually done separately since rangers must go through a 26-week academy.

The DEC has purchased a building that would allow more rangers and environmental conservation officers to go through the academy at one time.

“We’d probably have another class in the works in the coming year,” Seggos said.

“We have enough room within our budget to do that.”

Seggos thinks the DEC is doing enough to address increased traffic in the High Peaks.

“We have, really, a comprehensive solution to the problems of overuse.”

He spoke about how the lack of adequate parking, resulting in people parking on roads, has forced rangers to have to issue parking tickets instead of focusing on backcountry work.

“So we’re going to solve that over the coming year by putting a shuttle system in place in the High Peaks area” during high-use weekends.

That frees rangers to monitor trailheads, provide education and divert people to other trails, Seggos added.

Seggos believes the state’s tourism promotion efforts have contributed to the increased traffic in the Adirondacks, an effect seen statewide.

“When I grew up, it was always about can you get out to Yellowstone or Yosemite or … get into some other state, get down to Florida.

“People now are seeing what New York has to offer which is incredible landscapes.”

“Great problem to have, right? When people want to come to your places you just have to do what you can to make them want to come back which is give them a good experience.”

Over the next four weeks, the state plans to unveil a campaign to remind stores and customers about the upcoming single-use plastic bag ban, which goes into effect March 1, Seggos said.

Exempt bags — including those used to contain raw meat, package bulk items, garbage bags and bags provided by pharmacies for prescription drugs — are defined under the new law.

But Seggos said, over time, other exemptions would appear, such as single-use plastic bags in pet stores for selling goldfish or in art stores for protecting art from the elements.

“The idea is just the big transition away.”

Asked if there was any concern over whether the phasing out of single-use bags, which some people use to line smaller garbage pails, could result in an uptick in the purchase of more heavy-duty plastic garbage bags, Seggos spoke to the state’s ultimate desire to reduce its use of plastic.

“It poses problems in the landscape, 23 billion bags go into landfills, there’s only so much landfill space.

“The bags break apart, they get into the environment. They’re an eyesore.”

People are going to have to continue to use some plastic bags, like garbage bags, Seggos said, adding that the state would support producers finding a way to decrease those bags’ environmental impact.

“This law is just designed (for) the single-use retail bags which, by and large, (are) the largest source of plastic waste in the state.”