A retrospective on the mixtape

Peter Seward digs through a cabinet full of hundreds of mixtapes at his home in Saranac Lake Wednesday. (Enterprise photo — Griffin Kelly)

You’d often make a mixtape with the intention of giving it to other people, hoping to turn them on to new artists and genres of music. (Enterprise photo — Griffin Kelly)

Though comprised of other peoples’ work, mixtapes are seen as great forms of self-expression in the music world. (Enterprise photo — Griffin Kelly) 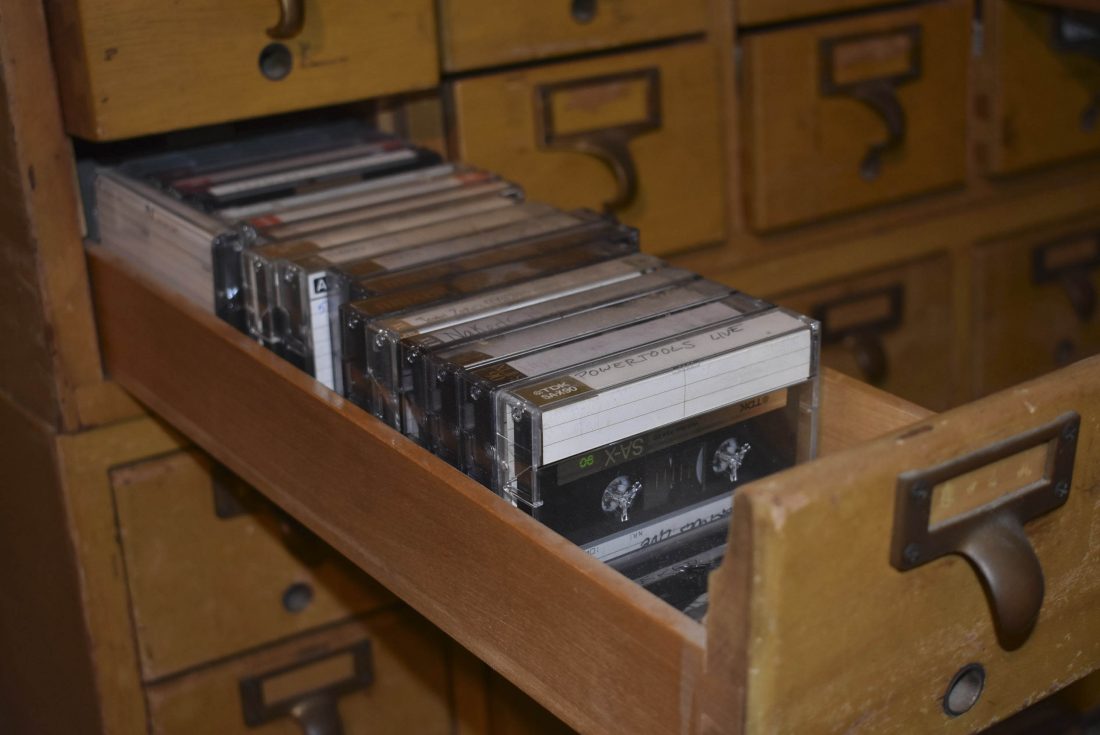 Though comprised of other peoples’ work, mixtapes are seen as great forms of self-expression in the music world. (Enterprise photo — Griffin Kelly)

SARANAC LAKE — Peter Seward crouched down, opened the drawers of his catalog cabinet and fingered through hundreds of musical memories. The mixtapes and live recordings had names such as “Wild Girl’s Last Ride,” “Great American Psychedelia” and “Country Killers,” which features country songs all about homicide.

Seward, who operates the music venue Lake Flower Landing, doesn’t listen to the tapes much these days, but he could never part with them either. The connection between Seward and his cassettes goes deeper than magnetic tape and plastic cases. It’s hours of creating themes. It’s meticulously developing track orders. It’s bringing personal recording equipment to live shows that would otherwise be one-time experiences.

“I don’t even have a tape player set up,” he said. “It’s more like this is a library of stuff I refuse to let go of.”

There is a nostalgic, sentimental aura around mixtapes. Even though the content was created by someone else, there is a sense of ownership and individuality that comes with the curated compilations. 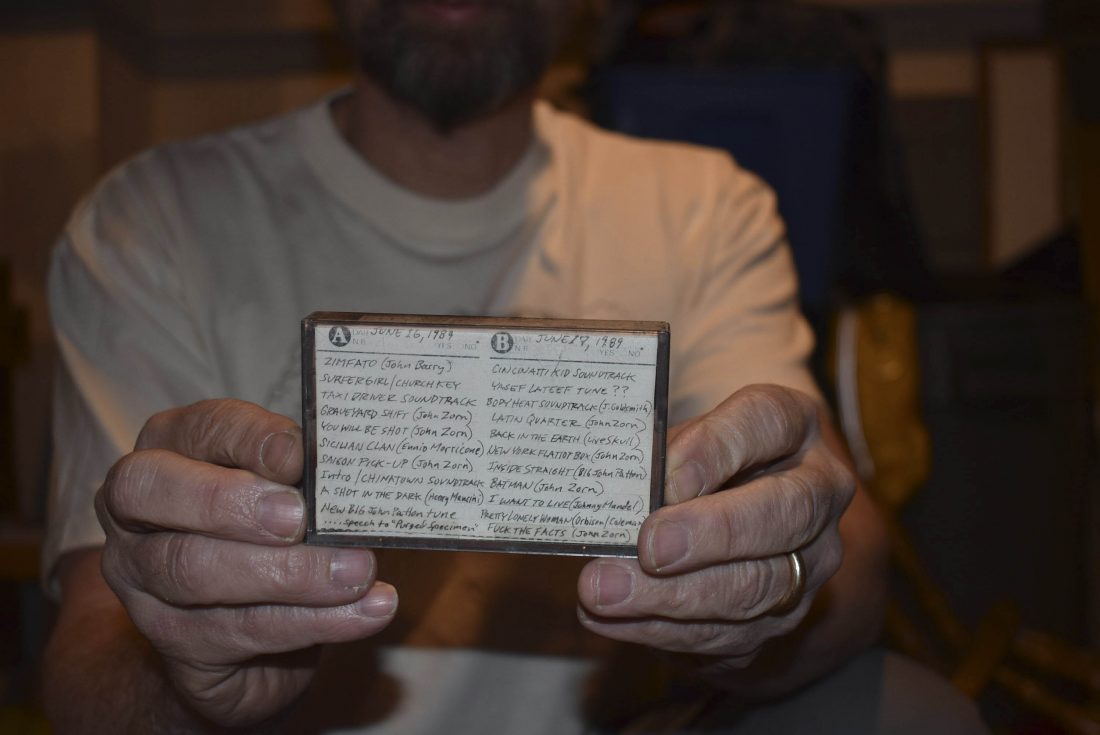 You’d often make a mixtape with the intention of giving it to other people, hoping to turn them on to new artists and genres of music. (Enterprise photo — Griffin Kelly)

“I got rid of a lot of mine in a flurry of cleaning, but now I totally regret it,” she said. “In my college days, I spent hours and hours making mixtapes. I generally dated a lot of guys who were either in bands or worked at a record store or had some strong musical affinity. They were like a courtship ritual almost, especially if you didn’t live in the same city.”

Making a mixtape took not only the 90 minutes to fill the cassette but also plenty deciding what music should go on which mix.

“Occasionally, people would throw in an ironic song like ‘Eye of the Tiger’ or something ridiculous,” Hofschneider said.

Similar to fanzines, mixtapes allowed people to express their passion for artists and bands they loved. Hofschneider would go beyond compiling music and create cover art for the mixes, often using cut up magazine pages for collages.

“It was a mode of self-expression that I don’t think exists much these days,” Hofschneider said. “Now, if you’re doing playlists, so much of the indie stuff is hard to find digitally. I feel like we’re getting told what we should like and not like. It’s sort of packaged for us. The excitement of finding some rare gem somewhere is not as easy to get now. 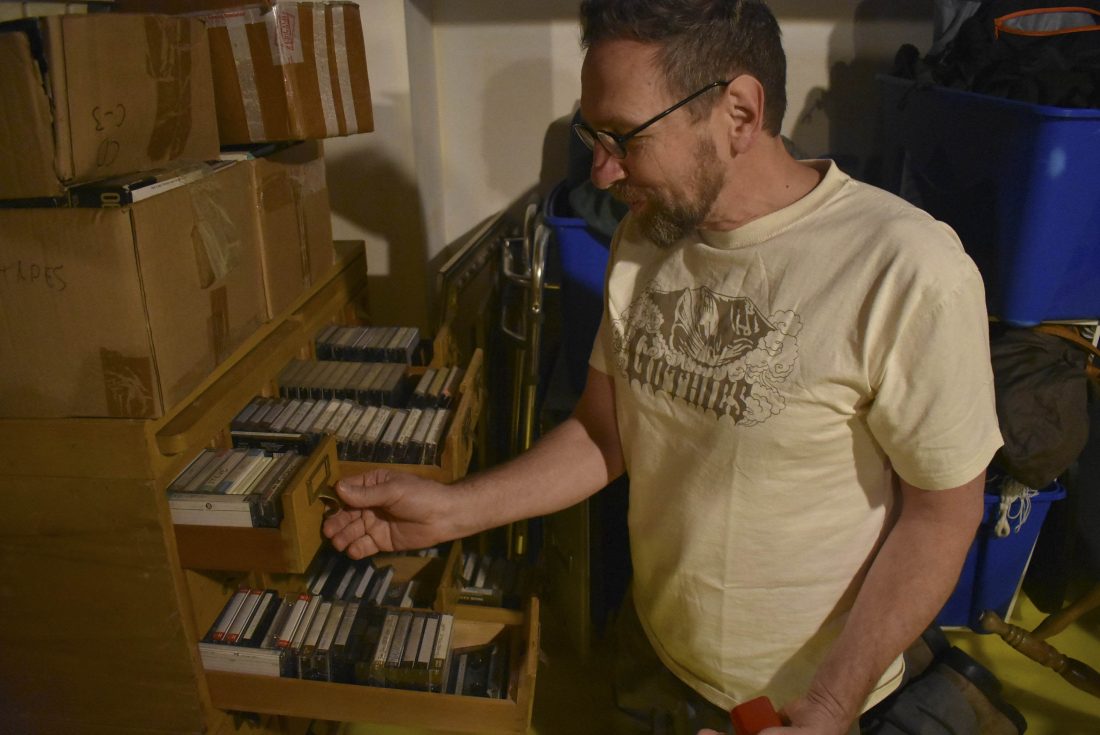 Peter Seward digs through a cabinet full of hundreds of mixtapes at his home in Saranac Lake Wednesday. (Enterprise photo — Griffin Kelly)

Seward said he would make mixtapes from albums he checked out from public libraries. He would record live shows at the Knitting Factory in Brooklyn. He would even make mixtapes of mixtapes.

These days, in the same vein of a mix, Seward will make playlists on his laptop and set them to silent films. For Arnold Fanck’s “The Holy Mountain,” Seward set the film to a collection of accordion music by Guy Klucevsek. For Charles Brant’s “Salome,” he used music from composer Mark Kramer and snippets from David Bowie’s “Low.”

“I couldn’t help myself,” he said. “I wanted to have some sort of say in it. They’re not only two films that I feel very strongly about, but I wanted to heighten the emotional experience of watching them.”

Cassettes, in general, are nothing too impressive from a technical standpoint. Vinyl started making a comeback in the mid-2000s because people fell in love with the sound quality all over again. Cassettes don’t have that advantage.

“The reason I ditched most of them is because the sound quality was awful,” Hofschneider said. “They’d get broken and you’d have to re-spool them with a pencil. They didn’t last.”

When you combine smartphones and computers with services such as Spotify, YouTube and Apple Music, limitations on what music you can listen to cease to exist. Most songs are at our fingertips instantly, but it can be difficult navigating that vastness.

Mark Coleman, who runs the Ampersound music shop, said mixtapes were the thing to do in the ’70s and ’80s, but he doesn’t have a strong attachment to them. He prefers original albums to products that have been reshaped by listeners. He didn’t care for themes and didn’t pay much attention to song order when making mixes. They were just things to pop into the tape deck in the car.

“Sometimes I abhor the acquisition of single songs instead of full albums, which I think are fuller representations of an artist,” he said. “Some artists are only capable of a single track, but if I’m going to listen to a YES album, then I’m going to listen to the whole thing. One track at a time doesn’t cut it. That’s what mixtapes were. It was just a bunch of singles all put together.”

Coleman values LP records and appreciates their resurgence among young listeners. He said mixtapes were the precursors to digital playlists, which he finds unengaging.

“LPs are not convenient,” he said. “They run 25 minutes or so to a side, and then one has to get off of one’s butt and go turn the record over. The quality of sound is not consistent because if you don’t take care of them, like I didn’t, they’ll get scratched up. You can’t take them wherever you want to go, and you can’t play them in the car. It’s an interactive thing that you have to pay attention to. To me, there’s more worth in that.”

Seward closed the drawers to his library-style cabinet, still not entirely sure if he’d break out the cassettes anytime soon. These aren’t original products. A public library wouldn’t be interested in them. Nobody would buy them. The future is unwritten for his novelties.

“These aren’t really things of so much value,” he said. “I might say they’re of value. I’ve resisted getting the technology to convert the analog signal into a digital signal. If and when I do, it’s going to be such a time commitment because I’m going to be pulled into this hole of making them listenable. Who’s going to dust off their tape player?”