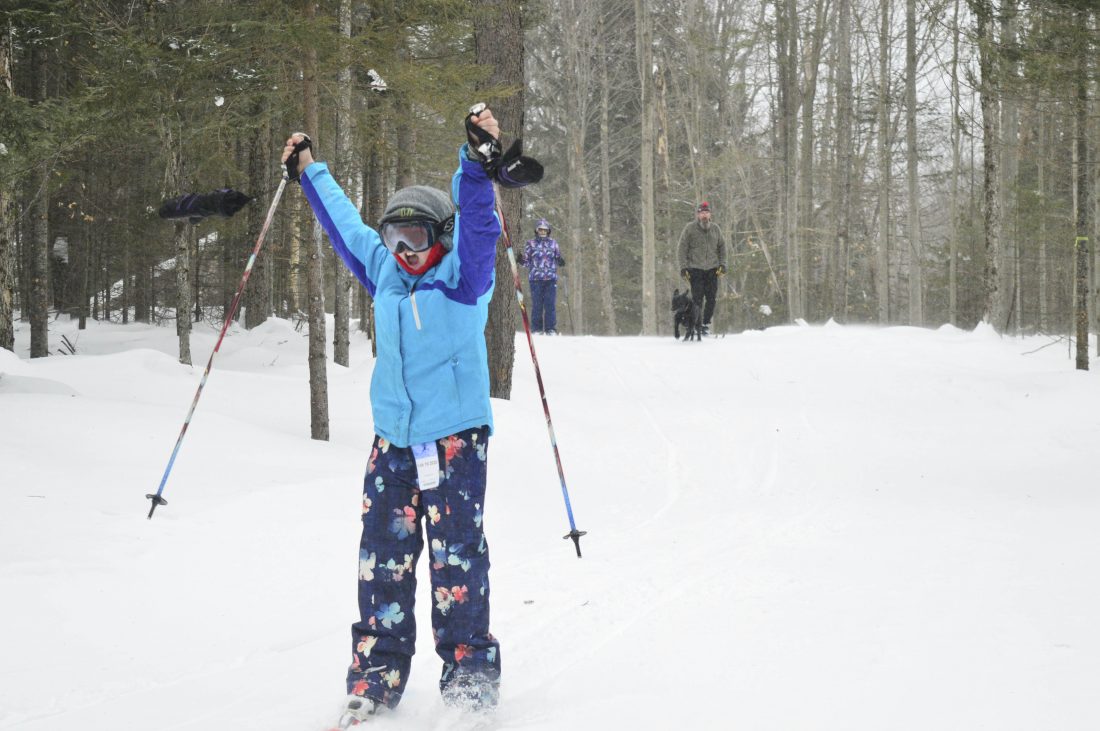 London Marquise soars down a new trail on the James C. Frenette Sr. Recreational Trails Tuesday. This trail was cut in response to users saying other trails on the golf course loop were too flat. (Enterprise photo — Aaron Cerbone)

TUPPER LAKE — On Tuesday the James C. Frenette Sr. Recreational Trails were filled with driving winds, cross-country skiers willing to brave the weather and dogs bounding through deep snow banks and chasing each other.

This was exactly what the trails were built for, said trail volunteer John Gillis. Over the past six years a group of volunteers have built the trails around the Tupper Lake Golf Club which will host the sixth Brew-Ski beer tasting and cross-country skiing event on Saturday.

Last year was the event’s biggest yet, drawing in nearly 500 people and seven breweries from around the North Country. Now nine breweries will have stations along the 1.5-mile loop around the golf course.

A spurt of trail work this fall now allows skiers to mostly stay in the woods, off the open fairways, where competitors in the Fire and Ice golf tournament will be smacking tennis balls through the snow drifts.

The new trail direction also keeps skiers out of the wind, which on Tuesday was blowing in gusts up to 35 miles per hour, driving snow at painful speeds across the driving ranges. But in the woods it did not bother the skiers, or the dogs, that are allowed at the Brew-Ski as well.

High Peaks Cyclery will be at the event renting cross-country skis, fat tire bikes and snowshoes for $10 each.

For the second year in a row, the weather appears to be shaping up for both brews and skis.

Gillis said after a snowy first year, the weather has not always cooperated for the Brew-Ski, and that sometimes it is more of a “brew-shoe.”

“We cancelled one year, and then we combined Fire and Ice with the Brew-Ski,” Gillis said. “Each event works well with the other. … Now we have an event that anchors the other.”

Christine Day is the Chamber of Commerce’s new events coordinator and is organizing the Brew-Ski this year. She used to organize the Fire and Ice golf tournament, too.

She said there will be some changes this year, based on suggestions of attendees last year.

“They had some surveys last year,” Day said. “Everything that they said they’d like, I gave them.”

Her three goals were to have music, a better way to hold the tasting cups and to not run out of beer. Day said each tasting station will have speakers set up so each brewer can set the vibe for their stand. Instead of purchasing a wristband to drink, Day said people will buy a lanyard, to which they can clip their cups.

She is also requiring each brewery to bring a minimum of two kegs.

Of the nine brewers two are new Tri-Lakes businesses, Hex and Hop of Bloomingdale and the Ray Brook Brewhouse. The returning breweries include Raquette River Brewing of Tupper Lake, Valcour Brewing and Oval Brewing of Plattsburgh, the Lake Placid Pub and Brewery and Big Slide of Lake Placid and Blue Line Brewing of Saranac Lake.

Day said the event is supposed to be a tasting, more than a “drinking,” so people expecting more than a sampling should bring their own booze as well.

There will be a costume contest with prized for “most creative” and “best couple.”

Although it is primarially a beer-tasting event, Day said kids are able to ski, too. The sledding hill at end of the Lollipop Loop will also be groomed.

The trails are based on the paths carved by Jim Frenette Sr. back in the 1960s. Frenette is Gillis’ uncle and he has taken up the legendary skier’s role of trail building. With lots of development in the past seven years, the trail system has become a multi-use area, with skiers and snowshoers sharing trails with fat tire bikers and dogs.

Now, Gillis said there are plans to accommodate mountain bikers in the summer and to build a lodge and fire pit near the parking lot.

“The whole idea of this now is that now that we’re off the (golf) course we’re going to be multi-season, multi-use,” Gillis said.

The work to cut the trail through the woods instead of across the greens on the eastern end of the loop started in October. Gillis, along with Eric Lanthier, John Quinn, Scott Chartier and Jules Callaghan, cut through the trees and laid down a mulch path. Gillis said they work well together.

“We had fantastic help from the town and the village,” Gillis said. “Pretty much every department of the village lent a hand.”

Gillis said if he called 20 people out for help, 18 would show up

For decades, Tupper Lake has had a strong volunteer ski community, and the 2020 Brew-Ski will showcase the latest accomplishment of those volunteers, the town cross-country ski trails.