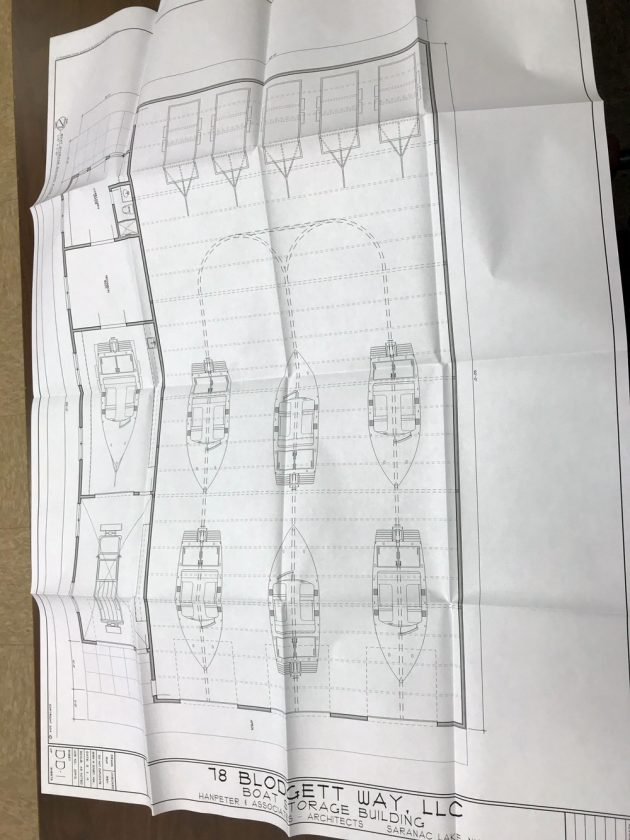 LAKE PLACID — The unnamed owner of a Great Camp-style mansion wants to build a large boat display building on the west shore of Lake Placid — too large for some neighbors.

The owner of Camp Hilgarth, a mansion built on the waterfront at least a century ago, has asked the North Elba-Lake Placid Joint Review Board for permission to build a more than 9,000-square-foot boathouse — but it wouldn’t be on the water. The property already has what a recent real estate listing ad describes as a “magnificent 4 slip boathouse with second floor entertainment room including stone fireplace, full bath and kitchen.” This new one would be on the footprint of an old tennis court on the property.

The new boathouse would have space for a “caretaker’s office” and at least seven boats, which would be displayed “museum-style” with climate control, according to Saranac Lake-based architect Richard Hanpeter, who is working on this project.

The board reviewed the architectural plans at its meeting Wednesday.

Rebecca Holmes, a neighbor whose family has lived next door to the Blodgett Way home for nearly half a century, said she has watched the historic property change hands several times over the years. Some projects undertaken by its owners were improvements, she said.

“This project would be a disappointment,” she said.

Holmes took issue with the project’s lighting plan — the downward-projecting lights would shine right into her home, she said. She also lamented the size of the proposed structure.

According to a stormwater plan submitted for the project, it is somewhere around 9,680 square feet. According to the project narrative, the boat storage building would be 60 feet in width and 120 feet in length, with an “attached 20′ x 100′ segment.”

“It’s half the width and length of a football field,” Holmes said.

“This is probably the largest (residential) structure on the lake built in my lifetime,” she said.

Jones said she’s concerned about the possible environmental impact of the building.

There will be a stormwater system installed to accommodate the expected use in this building, according to Hanpeter. The owner doesn’t expect boats to washed in the building.

Jones also worried about the possibility that the structure could disrupt the character of the lake by being visible to boaters.

“I think you will see this,” she said. “I think this is a travesty.”

Two other neighbors submitted letters to the review board. One, John Randall, wrote that he’d received notice of the project two days prior to the review board meeting. He requested the board take no action to allow him time to review the plans. On behalf of another property, called Camp Greentop, Henry Marcy wrote that “fundamentally, the planned boat storage building contrasts significantly in size and character from our tranquil, natural, wooded neighborhood and is therefore, questionable in the context of the North Elba Code.”

Marcy outlined a number of concerns, including its sheer size.

“It is immense (we are absolutely astounded at the size), exceeding the footprint of all homes and other structures in our neighborhood,” he wrote.

It’s unclear who the owner, or owners, of this property are.

The deed is held by a limited liability company, 78 Blodgett Way LLC, which is registered in Delaware — guaranteeing the owners’ anonymity — and not with the New York State Department of State’s Division of Corporations. In Essex County property records, the LLC lists an office building in St. Paul, Minnesota, as its address. That building housed the nonprofit McCarthy-Bjorklund Foundation, as of the organization’s 2017 federal tax filings.

The review board heard comments from neighbors but took no action on the proposal Wednesday.

(CORRECTION: An earlier version of this article incorrectly associated Dr. Benjamin Boublil with a boat gallery project at 78 Blodgett Way, Lake Placid. Boublil’s state Adirondack Park Agency application for a different project was mistakenly included in the Blodgett Way project’s file in the North Elba town Building and Planning Department. Boublil, a dentist from France, does not own the $11.5 million home at 78 Blodgett Way. That property owner, operating as 78 Blodgett Way LLC, has not yet been named. The Enterprise regrets the error.)