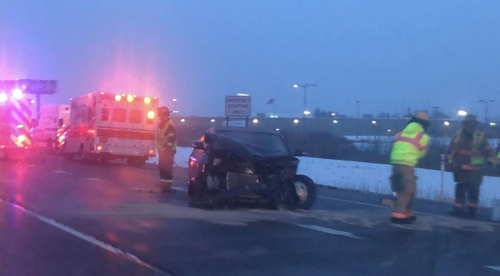 A vehicle comes to rest toward the right line on Interstate 81 after a crash on Tuesday. (Provided photo — Ben Muir, Watertown Daily Times)

WATERTOWN — A 21-year-old is OK after the vehicle he was driving spun out on Interstate 81 on Tuesday morning and came to rest in the middle of oncoming traffic.

Tyler Richards, 21, of Carbondale, Pennsylvania, was traveling northbound on 81 at around 6:40 a.m., near exit 46, when it appeared a car was merging into his lane. Richards lost control and drove into the guardrail while attempting to avoid the incoming vehicle, said Sgt. Victor Rodriguez with the Jefferson County Sheriff’s Office. He then spun out and came to a halt in the middle of the interstate, the front of his car facing oncoming traffic.

Martin Hitchcock, 62, of Connecticut, was approaching in his tractor-trailer, so Richards decided to get out of his 2015 Scion sedan and run away moments before the semi collided with it head on.

“He was definitely in some danger and had to expeditiously get away from the vehicle,” Rodriguez said.

The sheriff’s office and town fire and ambulance squads were dispatched at around 6:45 a.m. They shut down the right lane as they worked to remove debris and assist Richards and Hitchcock.

Richards’ car came to rest toward the right lane of 81 and could be seen with heavy front-end damage, while Hitchcock’s tractor-trailer was into the guardrail toward the median.

Rodriguez said there were no injuries.

“Time to buy a lottery ticket,” Rodriguez said of the fortunate outcome for Richards.