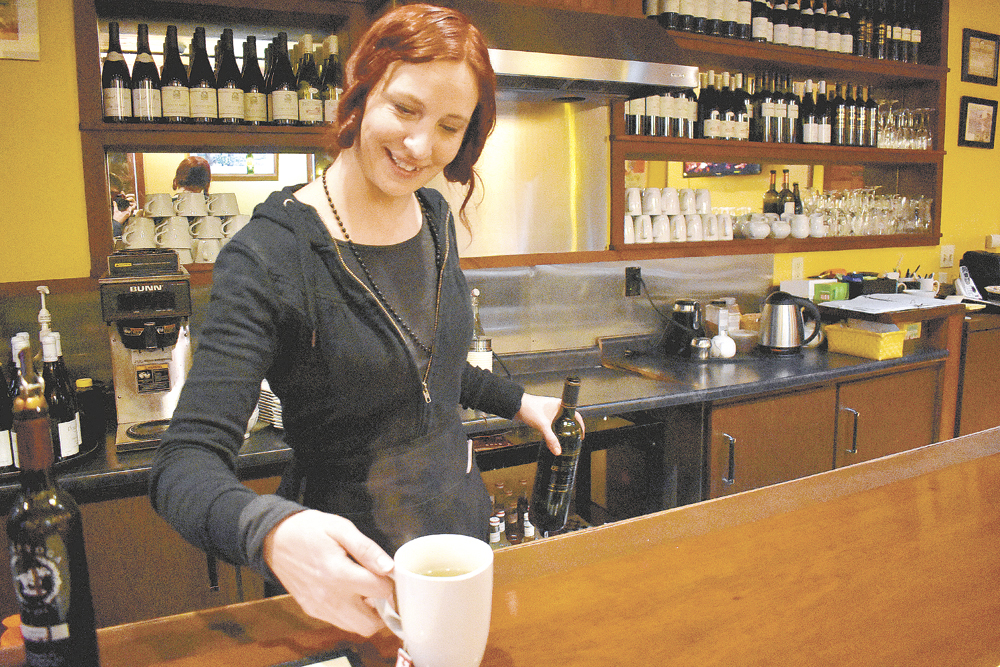 Sarah Curtis serves tea at Left Bank Cafe in Saranac Lake. On top of her job there, she also plays in a band, cleans houses, performs solo shows and works in her mother’s consignment shop. (Enterprise photo — Griffin Kelly)

SARANAC LAKE — In the North Country, the hustle is real.

In the gig economy, side hustles and part-time jobs are great ways for people to make money quickly to pay their bills, gas up their cars or go out to eat. If you’re a student, school is your main focus, but you might drive an Uber or tend bar for some pocket cash.

One in three Americans make money through a side hustle, and millennials make up 31% of that total, according to a June 2019 survey from Bankrate, a consumer financial services company based in New York City.

The Pew Research Center defines a millennial as anyone born between 1981 and 1996.

Here in the North Country, many millennials work multiple jobs — both above and under the table — just to make ends meet. 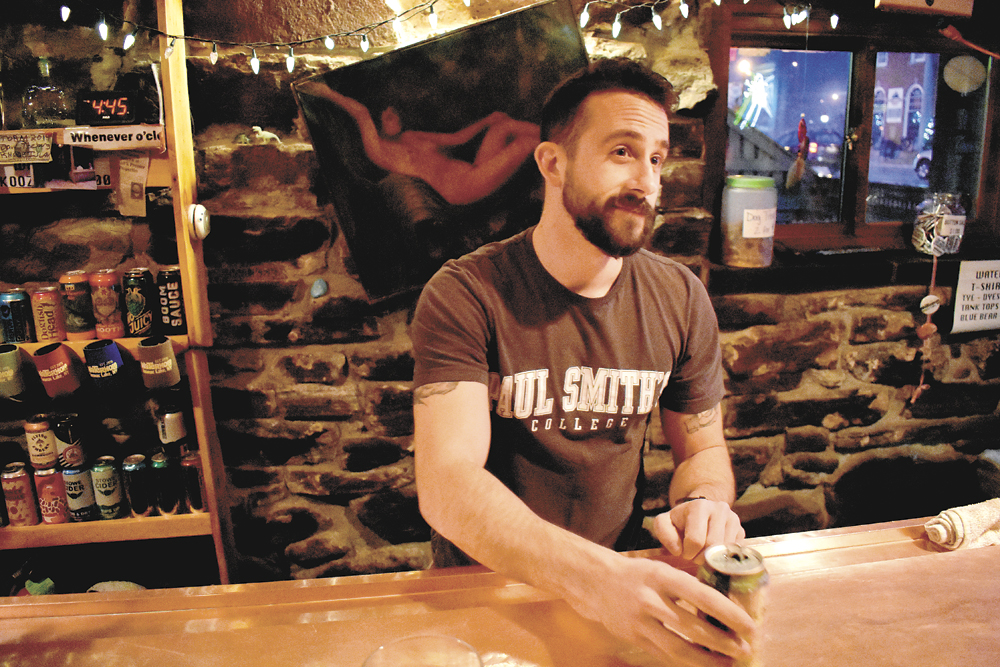 Spencer Bucolo bartends at the Waterhole in Saranac Lake. In addition to his bartending, he also works at Lisa G’s in Lake Placid and does freelance writing. (Enterprise photo — Griffin Kelly)

This type of economy is here to stay, according to a 2017 report from the state Department of Labor.

“The convergence of new technology and high levels of unemployment during and after the Great Recession helped to set the stage for the rise of the gig economy,” it says. “At the same time, there has been a shift away from traditional employment arrangements between workers and employers. Instead, the ‘new normal’ for many U.S. workers is short-term, piecemeal work.”

However, side gigs don’t often offer long-term security, health insurance and retirement plans. They can be stepping stones to better opportunities, but not careers many are looking to spend their lives doing. 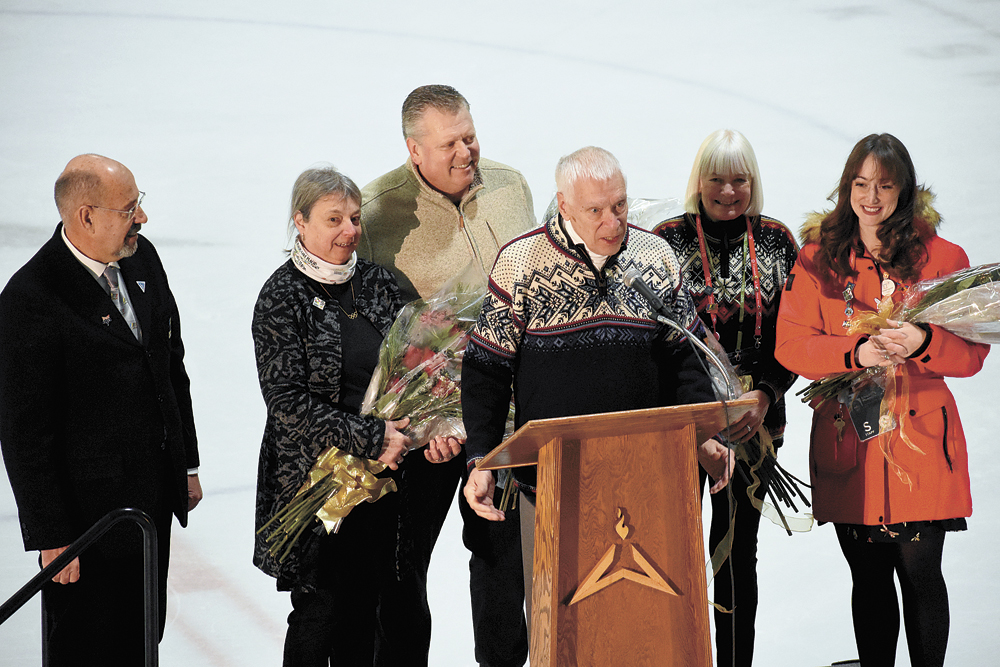 “One common issue is income variability, since gig work is not always steady,” the report says. “In addition, gig workers receive fewer traditional benefits and protections, since many service providers are classified as independent contractors. To thrive in the gig economy, workers usually must already possess the asset or skill that allows them to provide their service.”

“Which makes me just barely a millennial,” she said. 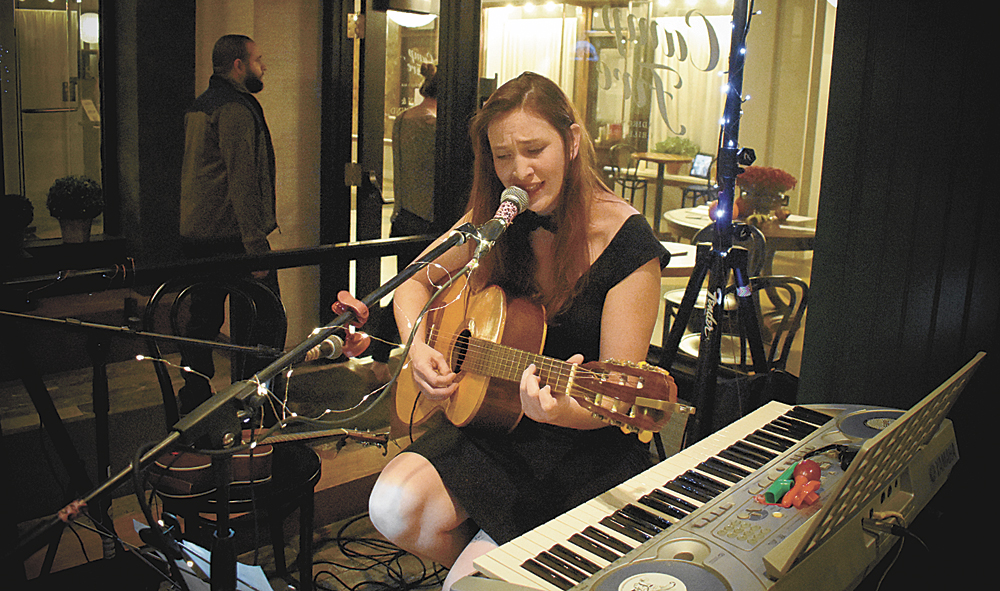 Curtis said she was a straight-A student in high school, received multiple scholarships and was accepted into a college honors program, but she never ended up going to college.

“I was intercepted by my over-religious and controlling father,” she said. “He didn’t think I needed to go to college. He had six children. We were only middle class — lower middle class at that — so he was afraid he wouldn’t be able to pay for education.”

Curtis currently works at her mother’s consignment shop, Main Street Exchange, in Saranac Lake and serves at Left Bank Cafe. On top of that, she sings in the swing-jazz band Crackin’ Foxy and occasionally performs solo shows. Sometimes she cleans homes as a side gig. At any given time she’s working about three jobs.

“It’s whatever I can pick up,” she said. “It’s an eternal struggle. Minimum wage has gone up a little bit, but everything has gone up so much more: the cost of food, the cost of rent, the cost of fuel. I don’t even have a car, which is part of the reason I can afford a nice place to live and decent food to eat and to take care of my dog. That’s my one luxury. I have a pet. I’m pretty close to the bone, living paycheck to paycheck.”

Despite all the part-time jobs not being the most financially reliable, Curtis said she couldn’t see herself working a stable desk job even if it would allow her more time to hang out with friends and attend concerts at night.

“I don’t think my attention span would allow me to be a secretary or something. I would just burn the place down,” she said. “I have to be doing something creative. That really limits my options. Waitressing is challenging enough that it keeps my mind busy, and it’s also lucrative enough that I don’t have to work seven days a week in order to pay my bills, so that’s why I’m sticking with that.”

‘All I really need’

Spencer Bucolo is 28 years old, and he recently graduated from Paul Smith’s College with a degree in recreation, adventure education and leisure management.

He now lives in Saranac Lake in an efficiency apartment. There’s no oven, but he does have a shower, a sink and a bed.

“That’s all I really need,” he said. “It’s paycheck to paycheck.”

He bartends at the Waterhole in Saranac Lake and works at Lisa G’s in Lake Placid. For “pocket change,” he writes freelance marketing and promotional pieces. However, the writing gigs are a bit of a gamble. He uploads a resume and a cover letter, and other people are competing for the same jobs, but there is a twist.

“I do it through this site called Upwork.com,” he said. “It’s kind of like a gimmick because you have to pay them money for these little token things, and you have to submit however many of these tokens for a job.”

The more jobs you apply to, the more tokens you need to buy, he said. Plus, Upwork takes a commission.

“So they’re making money left and right off of you,” he said.

“I think in the future, I would like a job that’s a little bit more steady, but right now I’m not unhappy by any means,” he said.

Eileen Mowrey is 27. She graduated from SUNY Fredonia in 2014 with a degree in journalism.

This past summer, she started working with the state Department of Environmental Conservation as a public participation specialist. She had done marketing work with the DEC in the past, and that transformed into a full-time position. (Correction: An earlier version of this article incorrectly stated the state agency Mowrey worked for.)

Before that, she worked for about two years in the gig market as a freelance event manager, writer, marketing consultant and social media coordinator. Some of these positions were rather high-profile, too. In January 2019, Mowrey was the executive director for the International Children’s Winter Games in Lake Placid, which saw student-athletes from across the globe competing in winter sports. She would also pick up bartending shifts at Bitters & Bones in Saranac Lake.

“It was a balance of being exciting and exhilarating and very rewarding, but also very stressful,” Mowrey said of her freelance work. “You don’t have a lot of free time. Sometimes people look at the gig economy and think of it as people with a lot of time off and flexibility. To me, it was 16-hour days and trying to piece together a living.”

Mowrey said money in terms of day-to-day purchases and paying her bills was never a struggle. The hard part was planning six months ahead and lining up future gigs.

“You can go from a time when you have six jobs and you can’t even take a breath to a time when you’re no longer needed and maybe you have only one job, itching for more work,” she said. “There’s a real unknown.

“Plus, when you have a full-time job, you’re paying your taxes with every paycheck. With freelance work, none of the money you make is taxed, so you need to remember to put it aside for later.”

Mowrey said one of the biggest struggles was losing her parents’ health insurance when she turned 26.

“For a whole year I didn’t have health insurance, and I couldn’t pay out of pocket,” she said. “It was stressful, but I was lucky enough to not get sick at that time.”

Despite difficulties, Mowrey said working in the gig market taught her how to be the worker employers want to hire.

“I think you learn a lot about being confident in your abilities and being able to sell yourself as a professional,” she said. “You are your own business, your own accountant, your own marketing team. It takes more than the two years I did it to master it.”