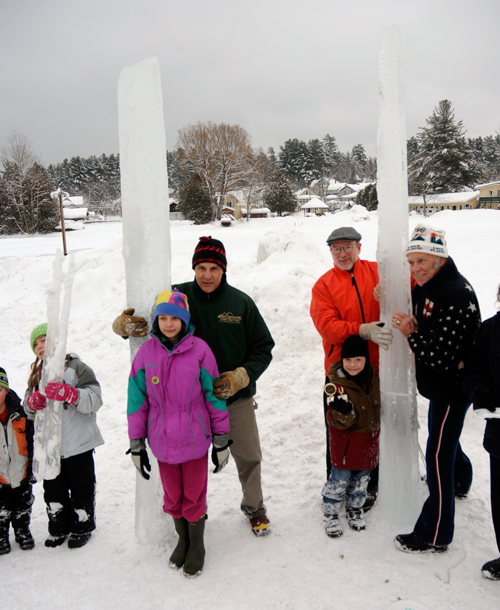 Contestants pose with their icicles in the Spike of Ice Icicle Contest in February 2011 during the Saranac Lake Winter Carnival. The winner, at right, was Medical Associates with a 9-foot, 1-inch monster. (Enterprise photo — Lou Reuter)

SARANAC LAKE — After a recent warm spell, temperatures are set to decrease, and icicles are likely to increase — especially on houses with insufficient insulation. This doesn’t have to be all bad, though. A particularly big icicle on your eave could win you a prize.

A new sponsor has prompted the Saranac Lake Winter Carnival Committee to bring back its Icicle Contest for this year’s festivities. Property owners will face off on Carnival’s first weekend to prove who has the biggest icicle hanging off his or her building. Submitted icicles must be naturally formed.

The contest gets more complicated in that you have to remove the icicle from the building and transport it — without breaking it — to the contest site: Riverside Park, at the corner of River and Main streets. Icicle drop-off begins at 11:30 a.m. Saturday, Feb. 1, and judging starts at noon. The largest intact icicles win.

A new twist is that each contestant must also provide a photograph of him- or herself with the icicle still attached to the building, before removal.

The previous version of the competition, called the Spike of Ice Icicle Contest, ran from 2011 to 2016, sponsored by Woltner Summit Contracting. Now it’s just called the Icicle Contest, and it’s motivated by an enthusiastic new sponsor, The Heat Keepers, according to Colleen O’Neill, the Carnival Committee spokesperson.

As with the old contest, the grand prize will help tighten up the winner’s home — possibly preventing future winnings, but saving the homeowner money on heating bills. First place wins $300 worth of spray foaming by The Heat Keepers, plus a free home energy assessment with blower door and boiler testing provided also by the company — and, to help keep one warmer in the meantime, a Heat Keepers sweatshirt.

The second- and third-place prizes each include the home energy assessment with blower door and boiler testing, and the sweatshirt. The fourth-, fifth- and sixth-place prizes are Heat Keepers long-sleeve T-shirts.

There are more prizes than in the old contest, O’Neill said.

You’ll also need to enter the contest at www.saranaclakewintercarnival.com/contact/registration-forms.

The Icicle Contest is just one of dozens of events taking place during the Saranac Lake Winter Carnival, which will run from Jan. 31 to Feb. 9. More information is available at www.saranaclakewintercarnival.com.