No room at Tupper inns 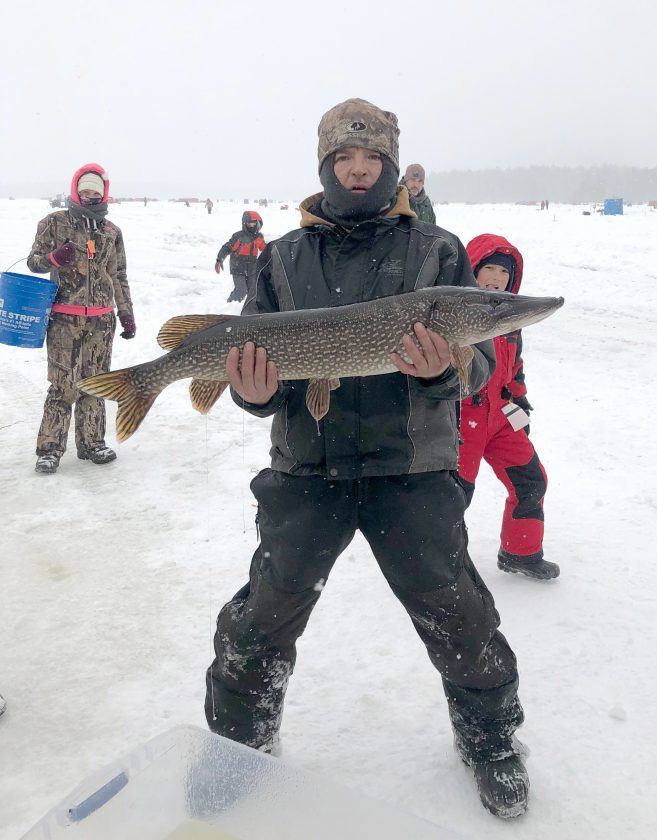 Timothy Herne of Hogansburg took home the prize of $3,590 for the biggest fish of the day for this 13.59-pound pike during the 2019 Northern Challenge ice fishing derby. (Photo provided)

With people traveling from as far as Texas to drop lines into the ice on Simon Pond — also known as Lake Simond — and the local civic center hosting the Empire State Winter Games girls hockey tournaments, hotel owners here say their lodges are full. Sports Club President Dave McMahon said some Northern Challenge participants are sleeping in their huts out on the ice.

He said they are sending people to Cranberry Lake and Long Lake to find rooms.

Terry Doolen of Shaheen’s Adirondack Inn said the hotel he runs with his wife Robyn does not have a room open this weekend.

Heidi Schuller of the Tupper Lake Motel said her establishment has been full since Wednesday.

A veritable city of about 1,000 fishermen descend on Simon Pond in Tupper Lake during the 2016 Northern Challenge Ice Fishing Derby. (Enterprise photo — Justin A. Levine)

“It looks like we’re going to have a record number of people this weekend,” McMahon said. “A lot of new people are coming.”

He said he expects more than 1,100 ice anglers out there Saturday and said the pond has around a foot of ice to hold them all up. That depth is still growing, signified by cracking and popping heard out there Thursday morning.

He said the five 50-50 raffles will be held uphill in the archery range this year, where the registration booths are, for warmth. Drawings will still be done on the waterfront.

The Tupper Lake Civic Center will host all the ESWG girls hockey games, except the championship games for the 14-and-under and 12-and-under divisions, which will be in Lake Placid’s 1980 Rink.

Also, this year Tupper Lake is hosting an Athletes Village, where athletes can sit around fire pits, drink hot chocolate and mak s’mores while they get to know each other. The space is open to the public.