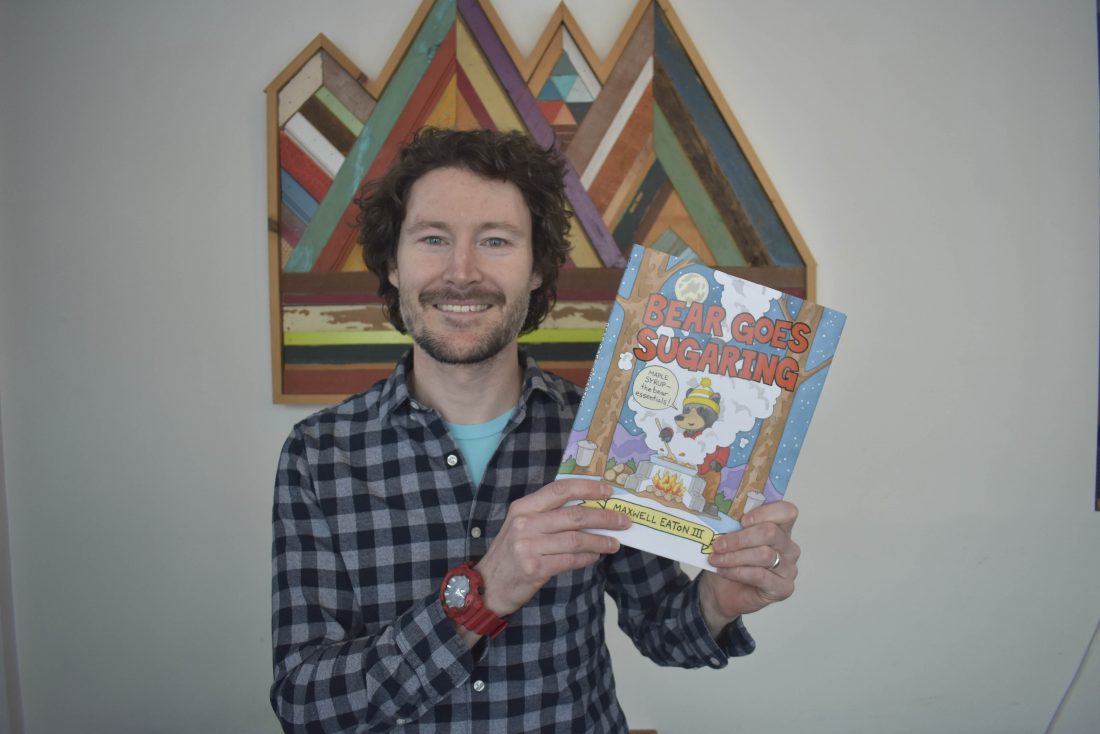 Maxwell Eaton III has written children’s books about hippos, dolphins and crocodiles. For his latest, he wanted to cover a topic a little bit closer to his home in the Adirondacks.

“I had been working on an idea with a bear that cuts some firewood and goes through the process of dropping a tree, bucking it up, splitting it, seasoning it,” he said. “I think it’s something that people around parts of the country aren’t familiar with. It gradually morphed into making maple syrup.”

“Bear Goes Sugaring” presents the in-depth process of making maple syrup in an easily understood narrative. The bear taps trees, builds an evaporator and boils maple syrup to perfection. All the while, her friends, a dog and a squirrel, scream about their hunger for pancakes.

“What appealed to me was a classroom being able to take on this kind of project.”

Originally from Cornwall, Vermont, Eaton now lives in Wilmington. Like Vermont, northern New York is well known for its sugarhouses, and this year’s New York’s Maple Weekends are the third and fourth weekends in March.

Eaton said sugaring lends itself nicely to an illustrated book. To make sure he got all the info and drawings correct, Eaton had the book fact-checked by Joseph Orefice, who used to direct the Uihlein Maple Center and teach forestry at Paul Smith’s College. He’s now the director of forest and agricultural operations at the Yale School of Forestry & Environmental Studies. The only tough part, Eaton said, was showing how and why trees produce sap, which scientists are still figuring out.

“Wrapping your head around that and illustrating it in a way that is easier to grasp would be difficult, period,” he said, “but then, making it interesting and putting it into a picture book was a struggle. That’s something (Orefice) really helped me with in terms of the science and the mechanics.”

At the end of the book, Eaton has an author’s note promoting organic lifestyles and doing things yourself.

“No corporations. Just backyards, buckets, campfires and friends,” it says.

Eaton said he thinks a sense of self-reliance is missing from today’s American culture and that making maple syrup is an approachable way to take that back. Whether it’s gardening, sugaring, home repairs, cutting firewood or brewing beer, Eaton said if it’s within his power to do it, he will.

“I think it’s really important that kids and readers realize just how much power they have and to do things on their own and that they don’t need maple syrup from the grocery store. They can do it themselves,” he said.

“Bear Goes Sugaring” can be found at the Bookstore Plus in Lake Placid or on penguinrandomhouse.com.