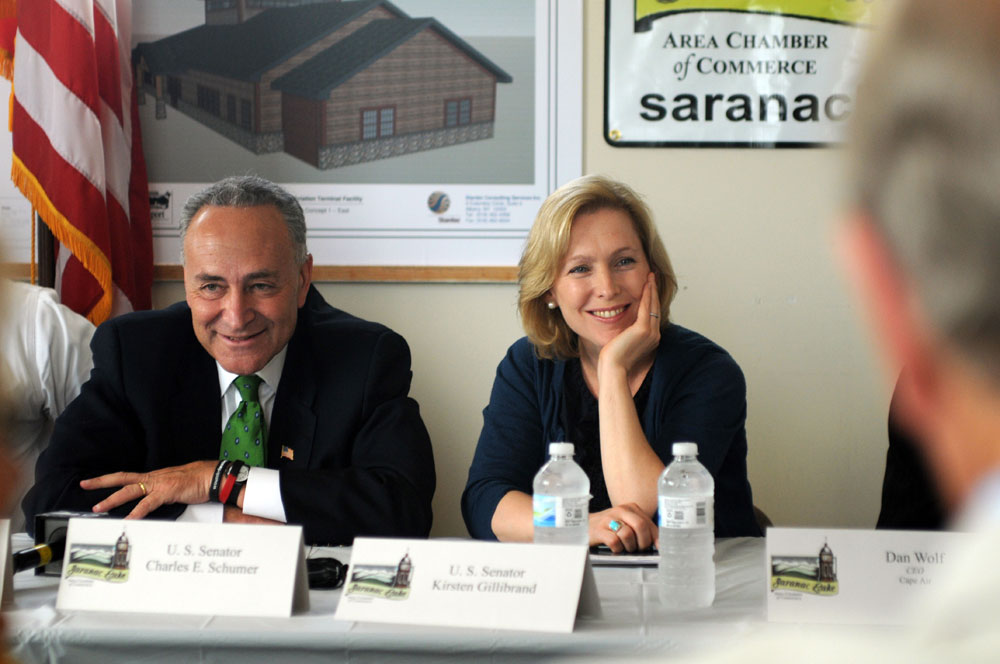 PLATTSBURGH — While several organizations applauded the U.S. Senate’s passage of the United States-Mexico-Canada Agreement, New York’s Senate delegation cited climate change concerns in their no votes on the measure.

The House of Representatives passed the resolution adopting the USMCA, a renegotiated version of the North American Free Trade Agreement, last month.

In a statement, North Country Chamber of Commerce President/CEO Garry Douglas said nothing is more important to the North Country’s economy than its growing partnership with Canada.

“Full Congressional approval of USMCA both preserves and enhances that partnership, bringing needed stability and predictability to cross-border commerce and investment of all kinds.”

In a statement released two days before the vote, Gillibrand allowed that the USMCA might be slightly better than NAFTA, but argued that was not good enough.

“Bad trade deals, including NAFTA, hollowed out upstate New York’s manufacturing industry. I don’t believe this agreement will reverse this trend or help the generations of New Yorkers who lost good jobs.”

Gillibrand also said the agreement is a “missed opportunity” to address threats from climate change.

“It fails to close loopholes for corporate polluters or set binding, enforceable standards to protect clean air and water.”

In a statement Thursday, Schumer said the USMCA does have good labor provisions, but that it does not address climate change, “the greatest threat facing the planet.”

“Instead of advancing global climate security by outlining binding and enforceable climate commitments from all three countries, the Trump administration provides significant incentives for manufacturers to move their business and their jobs from the U.S. to Mexico, where clean air and clean water regulations are much weaker,” Schumer said.

“Meanwhile, the Trump administration also included handouts for the oil and gas industry, such as lifting tariffs on tar sands, and refused to include any mention of the climate crisis in the agreement. When it comes to climate change, the agreement still contains many of the same flaws of the original NAFTA, which I voted against.”

Schumer commended the officials who made important improvements to USMCA with regard to workers’ rights, and said he fought to make sure New York’s dairy producers would benefit from it.

“But on the greatest issue facing our planet, addressing the climate crisis, the USMCA falls far too short.”

New York State GOP Chair Nick Langworthy said in a statement that the senators had voted to hurt the people they were supposed to represent, calling their no votes a slap in the face to the New Yorkers who stand to benefit from the deal.

“New Yorkers should never forget this dereliction of duty.”

Stefanik’s predecessor, Plattsburgh attorney Bill Owens, told the Press-Republican he would have voted in favor of the USMCA, were he in Schumer or Gillibrand’s position.

“The key from my perspective is the stability and the essential aspects of NAFTA that are going to stay in place and will continue to foster trade between, obviously the U.S. and Canada, but in particular our area as well.”

The continuation of zero-tariff treatment on goods exchanged between the three countries included in the USMCA was essential, Owens said.

“If you started applying duties at the U.S.-Canada and the U.S.-Mexican borders, you would alter trade dramatically,” including the supply chain activity fostered by the lack of tariffs.

Owens thinks that, without the policy, far fewer Canadian companies would create subsidiaries in the area.

“It would be a much different economic environment. It would not be as healthy.”

According to the U.S. Department of Agriculture, under the USMCA, U.S. dairy farmers will be more competitive in Canada, which agreed to eliminate Class 6 and 7 milk pricing programs “that allowed their farmers to undersell U.S. producers.”

U.S. Secretary of Agriculture Sonny Perdue said the Senate’s vote was great news for the country’s farmers and ranchers.

“With Congressional consideration now complete, our farmers and ranchers are eager to see the president sign this legislation and begin reaping the benefits of this critical agreement.”

Agribusiness organizations offered much praise for the deal’s passage.

“The northeastern agricultural industry, particularly the dairy industry, will benefit from a more balanced trading relationship with Canada and Mexico,” Northeast Agribusiness and Feed Alliance President John Clark said in a statement.

“The certainty that this agreement provides to farmers,” Fisher continued, “plus the potential for expected growth for our dairy farms, are reasons to commend lawmakers for getting the job done in a strong bipartisan fashion.”