Lake Placid to commission a study of downtown parking 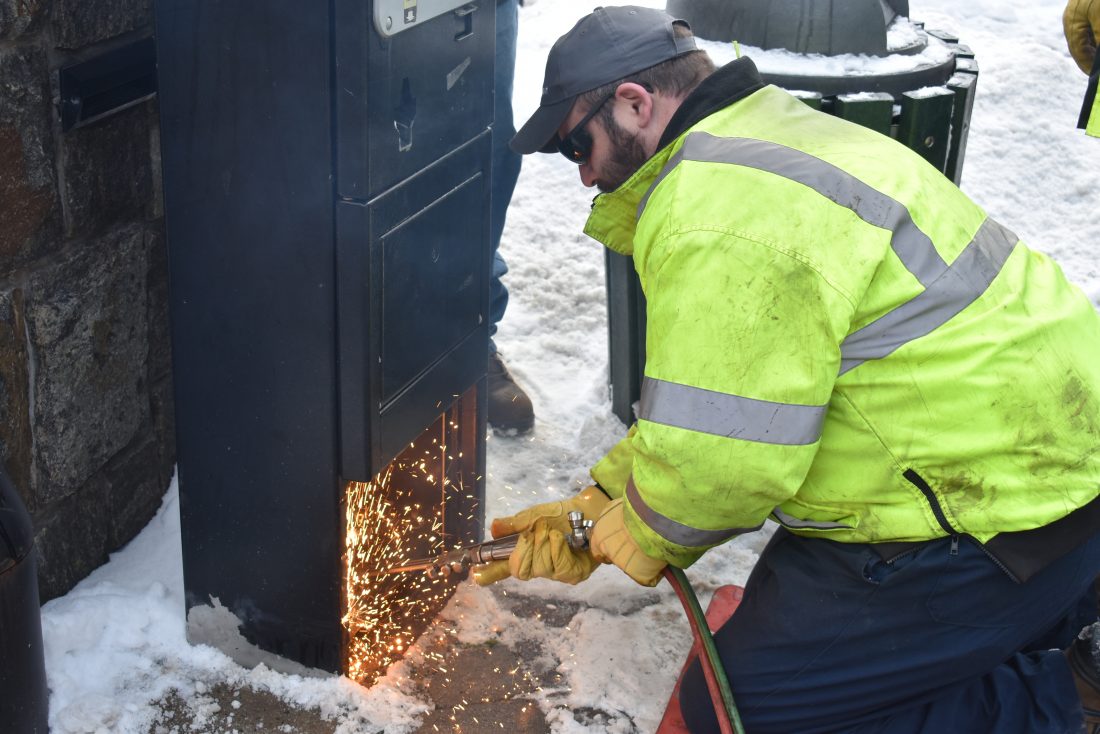 Corey Wylie of the Lake Placid Highway Department uses a blowtorch to remove an old parking meter beside Mid’s Park on Wednesday, Jan. 8. New meters are slated to be installed this week. (Enterprise photo — Elizabeth Izzo)

He announced the news during a meeting of the Main Street task force, made up of volunteers selected by Randall who are being asked to provide input on the village’s projected $8 million streetscape and infrastructure overhaul. The mayor said the village plans to commission a parking needs assessment to measure how much parking is needed downtown. It will also evaluate how much of that parking the village can reasonably develop.

“I see that happening as quickly as we can get a proposal that both (the village and town of North Elba) boards would accept,” Randall said.

He didn’t offer details on the scope of the parking study, saying the village is in the early stages of piecing together a proposal for it, but he stressed that the study will be separate from the upcoming Main Street upgrades. Village Trustee Peter Holderied added that the study is needed before solutions to Lake Placid’s parking issues can be put in place.

Multiple downtown parking studies have been commissioned throughout the last few decades, and the need for more downtown parking has been a point of discussion for more than 25 years. The idea of building a parking garage on Main Street, in particular, has been talked about since at least the 1993 mayoral race. In 2001, then-Mayor Roby Politi said the state Olympic Regional Development Authority should partner with the village and the town of North Elba on a parking garage.

The idea of building a parking garage on the upper municipal lot across from NBT Bank has also been discussed off and on for years. In 2003, the Lussi family, who owns Crowne Plaza, proposed building a multi-use retail and housing complex with a parking garage in the large municipal lot across from the post office. A modified version of the latter idea resurfaced Wednesday when the task force’s discussion turned to parking.

“There are other discussions going on between the village and potential other sites that aren’t public,” Randall said, later referencing talks with the High Peaks Resort and the Lussi family. “Conversations with the Lussis indicate there is some opportunity to develop more parking into the hillside. Obviously that project is much bigger than the village can, or should, take on by itself.”

Multiple members of the Main Street task force asked the village that public meetings be built into the process of conducting the parking study. The Main Street project has come under some fire by business owners, some of whom have decried the planning process as being devoid of public input.

“It’s about frontloading this discussion with public input,” said Golden Arrow Sales Director and task force member Brandon Montag. “It’s good to get everyone’s input from the public. That leads to more buy-in from the community.”