Ice and rain not so bad for the Tri-Lakes; Glens Falls hit harder 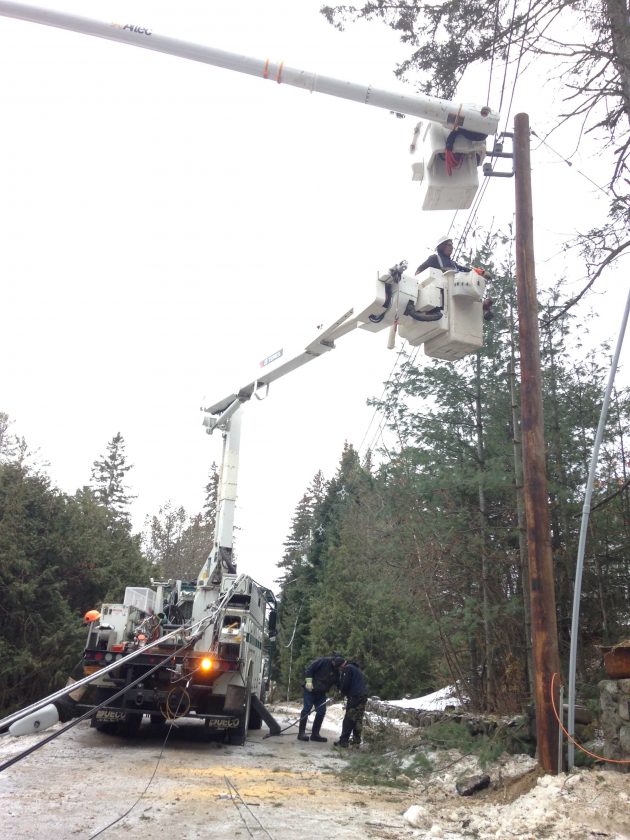 Lake Placid Municipal Electric workers connect powerlines to a new pole Sunday afternoon on Interlaken Avenue, where a fallen tree snapped the old pole into three pieces. Workers said the village had seen five power outages that day and that this was the worst. (Enterprise photo — Peter Crowley)

Other than some ice on roads and a few power outages, the ice and rainstorms over the weekend passed through the Tri-Lakes with little effect. However, it was the opposite for the Glens Falls area.

“It was not as bad as expected,” said Ricky Provost, Franklin County emergency preparedness director. “We did have some icy conditions on main routes, and some secondary roads still have some snow and ice, but those have all been sanded.”

Provost said there was ice on major roads in northern Franklin County from about 10 p.m. Saturday to 10 a.m. Sunday, but those were easily taken care of by plow and salt trucks.

“There were no major outages, and the weather looks to have passed,” he said.

On Sunday, Lake Placid Municipal Electric workers connected powerlines to a new pole on Interlaken Avenue, where a fallen tree snapped the old pole into three pieces. Workers said the village had seen five power outages that day and that this was the worst.

On Friday, both new York State Electric and Gas and National Grid said they were increasing their available staff for the weekend to deal with potential power outages.

Further south in the state, sporadic power outages were reported throughout Saratoga, Warren and Washington counties.

Strong winds ripped off of a portion of the Cobble Pond Farms convenience store roof on Quaker Road late Sunday morning in Queensbury.

The Post-Star contributed to this report.