Ice sculptor has big plans for ‘Myths and Legends’ palace 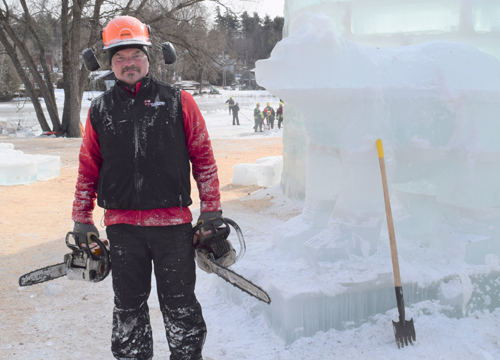 SARANAC LAKE — John “Doc” Ward worked as an art teacher in the Saranac Lake Central School District for 30 years. He retired about five years ago, and since then, he’s worked as an ice sculptor with the Winter Carnival each year.

This year’s Winter Carnival theme is “Myths and Legends,” so to go with that concept, Ward designed ice sculptures depicting crystal skulls, King Arthur’s sword in the stone, and Champy, the monster of Lake Champlain. One carving will be a UFO that kids can ride in while their parents take pictures.

Traditionally, art is done in a controlled environment like a studio or a workshop. However, ice carving is subject to the elements and plenty of human activity after a piece is finished.

“Whenever you’re doing a three-dimensional sculpture, especially one made of lake ice, the most difficult part is beating gravity,” Ward said. “The ice wants to come down. Gravity is pulling it. We’ve also got to be able to beat sunlight. If you do anything too fragile, and we have a sunny day, then all of the sudden we have nothing. We also have to consider that kids are going to be playing on it. Everything has to be thick, very solid and sturdy.”