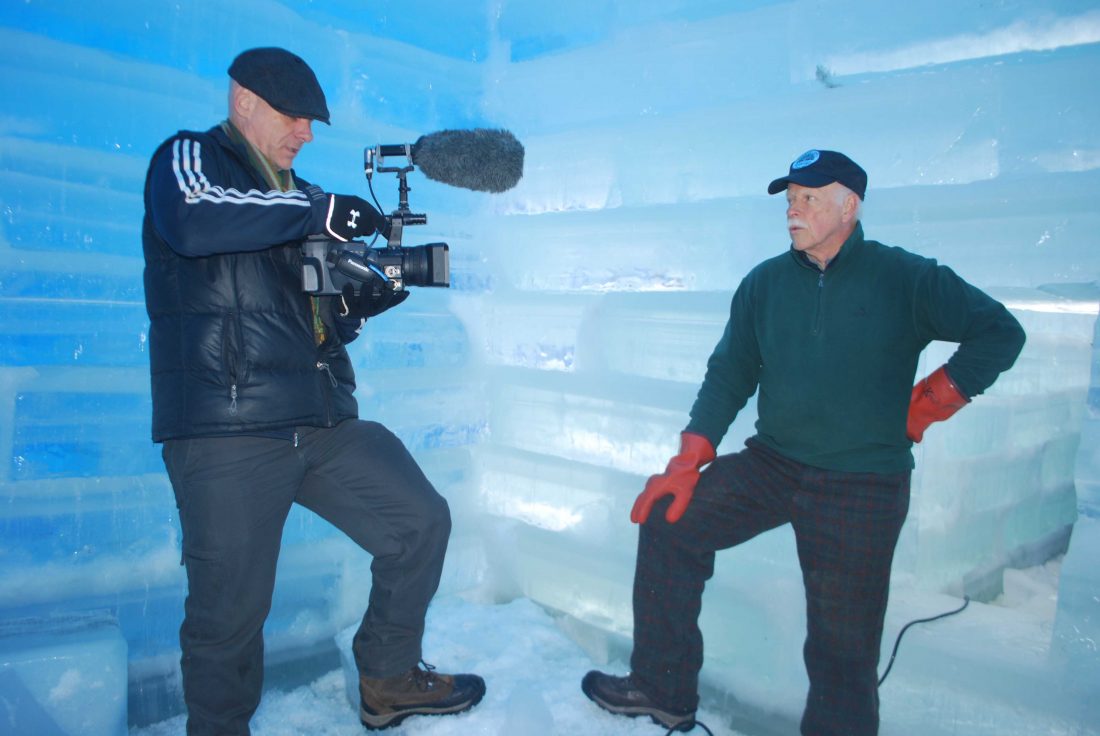 Mark Burns, left, interviews Dean Baker, head of the Ice Palace builders for the Saranac Lake Winter Carnival, inside a Palace that had just been battered but not broken by wind, rain and temperatures in the 50s in early February 2016. Burns’ finished documentary film, “Ice Palace: a Love Letter,” made its world premiere in October 2019 at the Lake Placid Film Festival. (Enterprise photo — Chris Knight)

SARANAC LAKE — “Ice Palace, A Love Letter” will have three screenings the week before the Saranac Lake Winter Carnival starts.

Tickets cost $10, and they can be bought at the door or in advance at icealovestory.com.

DVDs will also be sold at the screenings for $25.

The documentary chronicles the production and execution of the 2016 Saranac Lake Winter Carnival and its main attraction, the Ice Palace. That year’s theme was “Superheroes and “Villains,” so you’ll be sure to see plenty of people dressed in capes, cowls and spandex in the movie.

Burns said the documentary is more than just a celebration and a look inside a cool, frozen structure. The documentary covers subjects such as communication, Americana, small-town life and the prison system.

“I use the building of the Ice Palace to create the narrative of the film,” he said in a previous interview, “It’s about the people in this tight-knit community.

“Yes, I call it a love letter, but at the same time it’s dramatic and there are arcs. It’s an adoring look, but there is a great amount of entertainment to it, too.”

The film had its world premiere at the Palace Theatre in Lake Placid during the 2019 Lake Placid Film Festival in October. There, “Ice Palace” received plenty of applause and a standing ovation from a Saranac Lake-heavy crowd. It is Burns’ first feature-length film.

Burns said it’s been a good experience, showing his film at festivals over the past few months.

“It has been going great,” he said in a phone interview Wednesday. “We went down to the Key West Film Festival in mid-November and had a great screening. It was really well received. I’m also introducing a sold-out show as part of Hell’s Kitchen NYC Festival Friday. I’ve submitted to quite a few other festivals, and we’re hoping the film goes far and wide. The thrust of these festivals is to get a distributor interested.”

Next week marks the first time Burns will screen the film in Saranac Lake.

“I’m thinking it will be historic,” he said. “I’m nervous but also pretty thrilled about it.”