The First United Methodist Church of Saranac Lake hosts its annual Turkey Supper for the community on Election Day, Nov. 5, 2019. This bipartisan tradition goes back more than 80 years at this church. (Enterprise photo — Griffin Kelly) 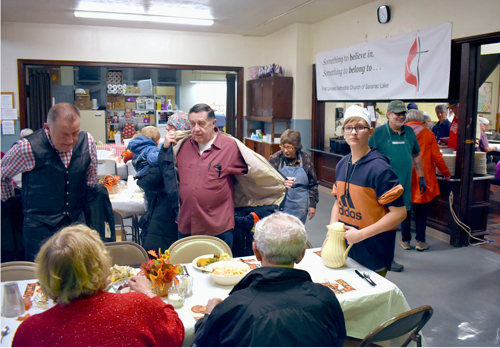 The First United Methodist Church of Saranac Lake hosts its annual Turkey Supper for the community on Election Day, Nov. 5, 2019. This bipartisan tradition goes back more than 80 years at this church. (Enterprise photo — Griffin Kelly)

John Wamsganz has been a parishioner at the First United Methodist Church of Saranac Lake since he was a teenager in the 1960s. He served on the church’s board for 15 years. His wife was a secretary at the church for 34 years. His grandmother baked pies to help fund the construction of the second church building in the 1920s. The UMC is in his blood.

Wamsganz said he doesn’t have a problem with homosexuality.

“It’s OK. It’s a changing time now, and there’s been a lot of changes in our lifetime,” he said. “Who am I to judge somebody?”

Not all Methodists are united in that opinion, however, and now this denomination, like others before it, is poised to split over the issue.

After years of debating whether to allow gay clergy and gay marriages, the United Methodist Church announced Friday a plan that would divide the church in two. A vote is scheduled for May at the denomination’s global conference in Minneapolis. 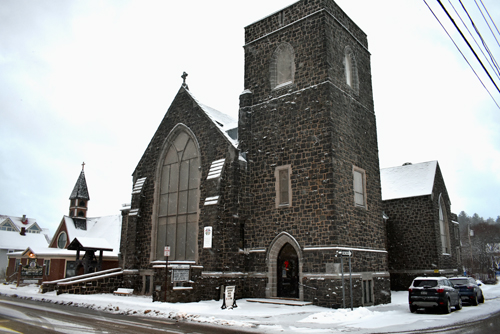 If the proposal passes in May, it would separate the UMC into “traditional Methodists” who don’t agree with homosexuality and the remainder who do.

“I think it’s tragic we have to come to this point, personally,” said the Rev. Eric Olsen, pastor of First United Methodist Church in Saranac Lake. “It’s forcing an issue that is seen as divisive, and I think it’s very soon in happening.”

Olsen said that if the church does split, it’s not totally clear what that would mean for his congregation.

“We haven’t really gotten guidelines from the greater church,” he said.

“There are some preliminary meetings in the next couple of months. We were shocked last week to know it was happening, but we’ll approach it thoughtfully and prayerfully.”

The UMC has more than 12 million parishioners and is the second-largest Protestant denomination in the U.S., behind the Southern Baptist Convention.

According to a 2014 Pew Research Center report, 60% of UMC members said homosexuality should be accepted, 32% said it should be discouraged, 4% said neither, and 3% said they didn’t know.

Wamsganz said this situation reminds him of his time in the Saranac Lake Volunteer Fire Department.

“I was in the fire department for 45 years, and I was chief three times,” he said. “When women came in, it was a big thing, and I voted yes. You’ve gotta change.”

Mitchel Smith has been a member of First United Methodist in Saranac Lake since the 1970s. He has worked on the church’s board, sung in the choir and taught in its Sunday school. He said he’s fully for the inclusion of all individuals, but he doesn’t know a lot about the potential split.

“I would need to know about how they would split and what that would mean for our church,” he said. “I just need more information on this proposal.”

Rose Van Wormer is on the board of Adirondack Community Church in Lake Placid. She’s been a member of the church since 2011. She doesn’t see a split affecting her congregation.

“We welcome everyone to our doors,” she said. “Nothing is going to happen until the vote is held. Then we’ll decide how to proceed.”

Homosexuality has been a topic of debate among Christian groups for centuries.

“It’s biblical interpretation,” Olsen said. “It says in the Bible that you’re not supposed to go there as a behavior, and some people interpret it differently.”

Among the Bible verses that reference same-sex relations, the Old Testament passage Leviticus 18:22 says, “You shall not lie with a male as with a woman; it is an abomination.”

Leviticus also says having a tattoo, wearing clothes of mixed fibers or having physical disabilities makes a person less holy.

“I don’t see (homosexuality) as an abomination,” Olsen said.

Olsen, however, is not a full-fledged Methodist pastor. For a longer time he has been pastor of the Lutheran Church of the Holy Trinity, which shares a building with First United Methodist in Saranac Lake. When the Methodist minister left in 2017, that congregation brought in Olsen to help and then decided to keep him on.

“I believe that if God puts you together as a couple, then the church has an obligation to meet you as a couple and to love and to care for you,” he said. “That’s not something that (the UMC) wants to bless as a sacrament. Lutherans will, because love is being shared.”

Olsen said he approaches homosexuality along the party lines of each church.

When asked if he thinks the UMC should accept gay clergy and marriages, Olsen said, “That’s a tough one to answer. I know gay clergy in the Lutheran denomination. I’ve been to gay weddings.

“The rules are the rules. In the same way, I know some Catholic priests who’d love to get married. You take a vow to the church, and you follow those vows.”

The Rev. Derek Hansen leads the congregation at the Adirondack Community Church as pastor. He declined comment Monday. For an article in March 2019, he wrote in an email that “United Methodist pastors have never been authorized by the denomination to officiate same-sex weddings.”

“It might split this congregation,” Olsen said. “Most are moderates, but there are two strong camps with very strong convictions. What’s interesting is I had a member who left the Lutheran church and became a Methodist because of these issues.”

Olsen said opposing viewpoints are nothing new among his parishioners.

“I’d say, yes, it has created tension, but there is always tension in a church,” he said. “You bring up the president of the United States, and there are those who are for him and those against him. The body of Christ is varied, and we want that. We want the church to be a place where you can argue and wrestle with issues — wrestle with our approach to the world.”

Anytime a church splits, it’s a painful process, according to Olsen.

“It takes years to sort out its meaning,” he said. “The Protestant Reformation happened 500 years ago, and we’re still wrestling with what that means. It’s going to have negative effects and feelings will be hurt no matter what happens.”