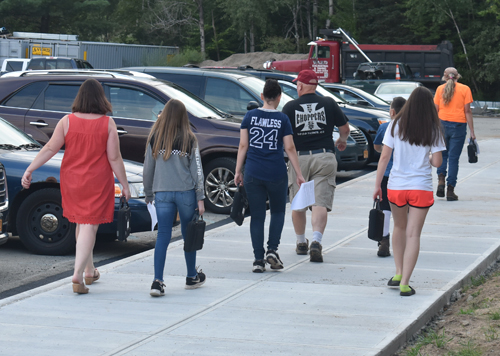 Students and their parents leave Saranac Lake High School with their assigned Chromebooks in carrying cases on Aug. 27, 2018, before the start of the first semester in which every student had one. (Enterprise photo — Griffin Kelly)

During Wednesday night’s school board meeting, Meserole expressed concerns about the number of Chromebooks she has had to fix or send away for repairs in the last year. She said she deals with broken hardware on a daily basis, and that can be anything from missing keys to devices that have snapped in half.

Before the start of the 2018-19 school year, the district began distributing Chromebooks to every student from grades 2 through 12. Only students in grades 6 and up are allowed to take them home.

Chromebooks are kind of like laptop computers, but instead of offering a multitude of applications and programs, they mainly serve as devices for internet browsing and Google Drive operations.

In a phone interview Friday, school Superintendent Diane Fox said the district started counting the number of repairs in fall 2019. She said the district has always tracked how much repairs cost, but she didn’t have that total number on hand.

A new Chromebook costs about $350, she said.

Meserole said the problem exists mainly in the middle school and usually deals with the Chromebooks’ touch-screen monitors. She thinks much of the damage happens when the Chromebooks are being transported to and from school and in the hallways between classes. Even if students don’t need them for schoolwork, some bring their Chromebooks home to charge them.

Meserole recommended purchasing non-touch-screen Chromebooks, which are cheaper, and investing in charging hubs for the school.

Board member Rick Retrosi asked how important it is for students to take their Chromebooks home. Board member Jeremy Evans said his child in seventh grade has used a Chromebook at home only a handful of times this school year.

“As far as I’m concerned, it can stay at school,” he said.

However, he also reminded the board that not every student has access to a computer and the internet at home, so it’s difficult to put limits on which students can take the Chromebooks home.

Fox said no decisions have been made, but the district is looking into purchasing non-touch-screen Chromebooks and in-school charging stations in case students would prefer to leave them there.