Buttigieg, Stefanik were friends at Harvard 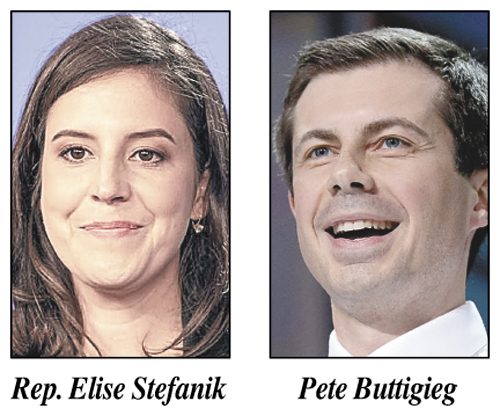 As U.S. Rep. Elise Stefanik takes on a role as one of President Donald Trump’s reelection campaign chairs in New York, she said she is eying the field of Democratic contenders from a distance.

“I’m very disconnected from the far left,” she said.

However, she was friends with one of the Democratic candidates, Pete Buttigieg, in their days together at the Harvard Institute of Politics.

Though they were never classmates, Stefanik said they both were heavily involved in the Institute of Politics: she as its vice president in 2004, he as president in 2002.

Stefanik said they were “friends,” and a spokeswoman for her told the New York Post the two went out for coffee at least once while on campus.

She said she had many classmates who have gone on to do influential things. She also met Facebook co-founder Mark Zuckerberg, who developed the now-massive social media company while attending Harvard in 2004, before dropping out of school in his sophomore year.

“Facebook is in a challenging time right now,” she said.

“I disagree with virtually everything Pelosi says,” Stefanik said when asked about this.

Stefanik was tentative to say who she thinks will be the Democratic opponent Trump faces in November.

She does predict that “Elizabeth Warren is going to continue to plummet in the polls.” But, she added, her predictions have not always panned out in the past.

“Just to tell you how wrong I was, two months ago a lot of people, including myself, predicted that she (Warren) could have been the nominee,” Stefanik said. “Now, I think she’s going to sink like a rock.”