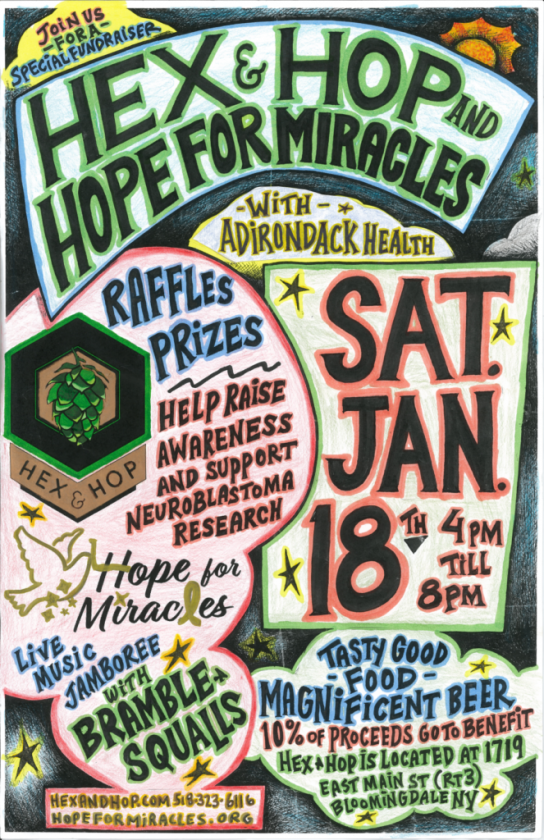 A poster for Hex & Hop Brewing’s fundraiser for the Hope for Miracles charity, an organization that supports children’s cancer research and treatment. (Photo provided)

BLOOMINGDALE — When Holly LaBombard-Hull’s son Karson was 4 years old, he developed a tumor near his liver the size of a grapefruit.

“It’s the worst feeling in the whole entire world to hear that,” LaBombard-Hull of Jay said in a phone interview Thursday. “You’re scared to death.”

Karson had neuroblastoma, a rare type of cancer that most commonly forms in and around the adrenal glands of children age 5 or younger.

“The first time he had it, we thought it was pneumonia. His sister had it the week prior, and he started showing some symptoms. We took him to the doctor. After doing a routine check where the doctor pushed on his stomach, he said, ‘Well, he doesn’t have pneumonia, but we did find a tumor in his stomach.'”

A team of surgeons was able to remove Karson’s tumor without having to start chemotherapy or radiation treatment after. Another tumor developed five years later. This time it was much smaller, about the size of a grape. That was also removed without further treatment. LaBombard-Hull said Karson is doing fine now but still regularly goes to the doctor for checkups.

LaBombard-Hull founded the Hope for Miracles charity in December 2018 because she wanted to help other families who deal with neuroblastoma and to make people aware that not a lot of money goes toward pediatric cancer research each year. According to the National Pediatric Cancer Foundation, “only 4% of the billions of dollars that are annually spent on cancer research and treatments are directed towards treating childhood cancer.”

Hex & Hop Brewing on state Route 3 will help raise funds for Hope for Miracles with an event Saturday, Jan. 18. from 4 to 8 p.m. The event will feature raffles, prizes and live music from Bramble and Squalls. Ten percent of all food and drink proceeds will go to the charity.

“The American Cancer Society will post gut-wrenching advertisements of children with cancer, but then only 4% of all the money raised goes to kids,” LaBombard-Hull said. “A lot of people don’t know that. They say, ‘Pediatric cancer? The government’s got that,’ but it’s actually the smaller charities specifically geared toward it that are funding the research and treatment.”

“We’re so new, so we were completely unknown to everyone,” she said. “I think we’re definitely making progress, especially when we partner with local businesses. We worked with a handful this past year. Adirondack Health is an amazing supporter. The Mirror Lake Inn (in Lake Placid) donates a wonderful package to us. Experience Outdoors once donated all of its sales to us for a day. People would pay to go zip-lining, and then the money went to us. 20 Main in AuSable Forks hosted a fundraiser for us and even the band that played at the event donated.”

LaBombard-Hull said normally it was her group reaching out to local businesses and organizations for support, but Hex & Hop was different.

“They contacted us, which is a first,” she said. “They were like, ‘We heard about you, and we want to do a benefit.’ So it’s really wonderful to have someone reaching out.”

“Our good friends, who are also doing the music that night, had met the charity at another event,” said Hex & Hop Owner Nick Delaini. “After asking a few more people in the community, we figured Hope for Miracles sounded great and that it was a really good cause.”