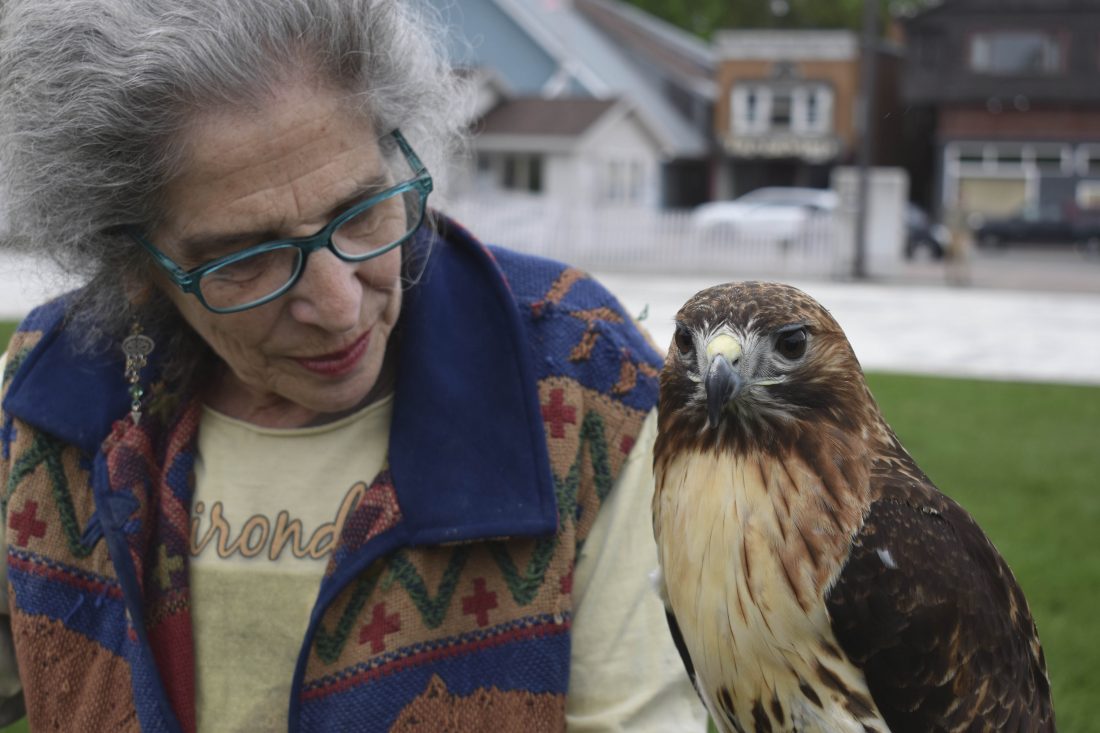 Wendy Hall of the Adirondack Wildlife Refuge lets Jonas, a red-tailed hawk, perch on her arm in May 2018 at the Big Green Shin-Dig event in front of Lake Placid High School. (Enterprise photo — Griffin Kelly)

WILMINGTON — The Adirondack Wildlife Refuge, whose co-owner had her state wildlife rehabilitation license revoked, has asked a federal agency to allow the organization to keep some of the refuge’s birds for exhibition purposes.

Wendy and Steven Hall, who co-own the refuge, have submitted applications requesting that the U.S. Fish and Wildlife Service to allow them to keep their migratory birds. The requests come after the USFWS previously denied their applications, the Enterprise has learned. According to the state Department of Environmental Conservation, which is working closely with USFWS on this case, Hall has continued to illegally possess birds after her federal rehabilitation permit expired in November 2018.

USFWS spokesman David Eisenhauer confirmed that Hall has asked the agency to reconsider its denial of her applications, and when asked what laws had been broken, referred to the DEC’s prior statements.

“The service is still reviewing Ms. Hall’s request for reconsideration and information from our site inspection last week,” he said. “We are coordinating closely with DEC on this case and will provide additional details when the review process is completed.”

Wendy, reached by phone Wednesday evening, conceded that she hasn’t kept up with required paperwork.

“There’s no excuse for me not keeping up with what I need to do,” she said.

But Wendy said she was unaware that her federal permits had expired until her applications to keep the birds were denied recently.

“The person that I paid to do it, unbeknownst to me, didn’t put them in the mail,” she said. “I didn’t know that until I started looking to why I didn’t get the renewal.”

The DEC notified Hall of its intention to revoke her license on Oct. 31, 2019. She did not appeal that notice, and her license was revoked on Nov. 25, 2019, according to the DEC.

“The action was the culmination of years of non-compliance with prior state enforcement actions, as well as repeated and ongoing violations of state and federal laws, regulations, and license conditions that are in place to protect public safety, native wildlife, and the animals in a rehabilitator’s care,” she said.

Asked what laws were violated, the Enterprise was directed by the DEC to file a Freedom of Information Law request, which it did. The DEC had not yet responded to that request Wednesday.

The Halls have said that the catalyst for the license being revoked was an injured, unlicensed bald eagle that was found by the DEC and USFWS during a spot inspection.

Hall was ordered to release healthy native animals in her care to the wild, and to transfer animals in need of care to another licensed wildlife rehabilitator in the state. She was required to surrender animals at the refuge that are federally protected under the Migratory Bird Treaty Act. She is allowed to keep some animals held at the refuge under her DEC exhibition license.

The Halls both said that the refuge has often had trouble getting in contact, and getting information, from the DEC and USFWS. Steven said that a wildlife rehabilitator they’ve hired to take over the rehabilitation side of the business, while he and his wife focus on education, has been waiting a month to get approval for her work from the USFWS.

On the refuge’s Facebook page, the Halls asked visitors to write to their state senators, Assembly reps and Gov. Andrew Cuomo to express their opinion about the DEC’s decision to revoke Wendy’s license.

But it’s likely too late for the DEC to reconsider its decision.

“There are no provisions in Environmental Conservation Law that allow for Ms. Hall to request that DEC revisit the revocation of her wildlife rehabilitation license,” Wren said. “Ms. Hall had the option to request a hearing to challenge the revocation, but she specifically informed DEC that she did not want to pursue that option.”

Kim Lawrence, a retired Moira-based wildlife rehabilitator of more than 35 years, said the state plays an important role in ensuring animals receive a proper standard of care, but she thinks what has happened “is a shame, both for the wildlife, the public that the refuge serves, for the rehabbers and the state.”

“I think everyone is in a losing position,” she said. “We need places like Wendy’s refuge.”

As a rehabilitator herself, she knows the constant battle between providing animals with the care they need — which is often time-consuming — and balancing regulatory and paperwork requirements.

Lawrence said she feels the benefits of the Halls’ refuge far outweigh any issues that may have been found. The refuge offers kids in the Native American community the chance to connect face to face with their clan animals, she said — an important and meaningful opportunity for them.

“In an ideal world, I’d like to see those issues articulated and have them all sit down and say, ‘How can we manage this?'” she said. “I think Wendy’s refuge is one of the best I’ve ever seen. To see them revoke the license is a shame. Everybody loses.”

The news of Hall’s license revocation, first reported in the Enterprise, was met with an outpouring of support from those who have visited the refuge over the years.

“This angers me so much!” photographer Sara Goodrow wrote on social media last week. “This is such a wonderful place. We used to live down the road, we could hear the wolves howling from our house. The work that they do is unprecedented. They help animals. They care about educating people. So so sad. It really is such a special place.”

“This is so sad,” wrote Amy Kat. “I visited just over Christmas and the obvious love and care for the animals is quite apparent. Nobody does rehab to make money. Each animal had a story about how it was rescued and why it can’t be released. Once a wild animal is dependent on humans, it can’t survive on its own and can in fact be dangerous. And educating ‘city people’ ensures that everyone learns why the Adirondacks should be ‘forever wild’ and why protecting land and animals is critical.”

The Adirondack Wildlife Refuge, first established in Wilmington in 2000, welcomes some 50,000 visitors each year as well as students from many local schools, Steven said.

Wendy has traveled with the refuge’s animals to put on programs about wildlife and habitat. She has spoken for a variety of organizations, including the Defenders of Wildlife, the Sierra Club, the Nature Conservancy and Important Birding Areas.