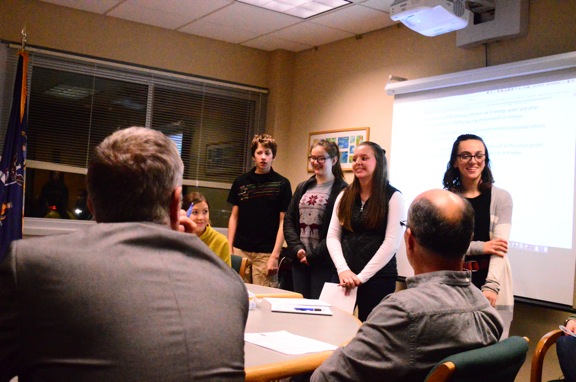 TUPPER LAKE — Members of the Tupper Lake High School Green Team saw a resolution they drafted with a teacher get passed at Monday’s Tupper Lake Central School District board meeting, creating the opportunity to institute several of their proposed environmental improvements to the district’s two schools.

The resolution, which passed unanimously, addresses a request from the students to improve the district’s impact on the environment and output of garbage.

Team members, along with team adviser and special education teacher Lee Kyler, successfully lobbied the town and village boards this summer to pass resolutions designating the municipalities as Climate Smart Communities. Since the elementary and middle/high schools play a large role in the community, the students said those buildings should be examples of how to improve environmental sustainability.

A few of the ideas proposed include a compost-fed garden, which started in September after now-graduated students Sophia Martin and Emily Burns helped organize the project last school year. Further ideas include introducing compostable cafeteria material, such as paper straws and condiment containers, recycling — which students said is not currently convenient in either building — and turning off technology when it is not being used.

Price said turning them off extrapolates to around $175 in savings across two computer-heavy rooms in the district over the same period.

These changes will be worked on by a committee to be comprised of one board member, two Green Team members and one faculty member. After this committee assesses the environmental needs of the district, it will create an environmental action plan including risk assessment for any major change or addition to the school.

The committee’s environmental assessments will be reviewed by the school board every December. The resolution leaves the future open to interpretation “as environmental needs change and require more attention.”