Still no clear cause of Franklin highway garage fire 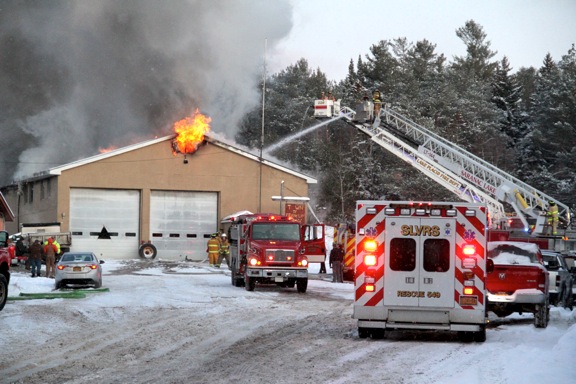 VERMONTVILLE — It’s still not entirely clear what caused the fire at the town of Franklin Highway Department garage Saturday.

“The investigators have a few ideas, but the official jury is still out,” said Arthur Willman, town supervisor. “I don’t want to speculate at this point. They plan on sending over a few cause-and-origin investigators soon, and the hope is to have an answer by the end of this week or the start of next.”

The fire at the garage on state Route 3 broke out in the afternoon, and the call initially came into the Bloomingdale Volunteer Fire Department at 3:08 p.m. State Police and many local fire departments responded to the fire. The garage didn’t have a sprinkler system. Willman said that wasn’t a requirement when the garage was first built in 1981.

By Sunday, some of the garage’s walls were still standing, but the roof had completely caved in, and all the town’s serviceable plow trucks were destroyed, Willman said. Cutting edges for plows, hydraulic fittings and other replacement parts were also lost.

Willman said the fire shouldn’t majorly affect the highway department’s budget, which in 2020 will be $1,581,541. He said the loss of the garage and vehicles, which cost about $200,000 apiece, should be taken care of by the town’s insurance. When it comes to replacing the vehicles, Willman said he’s been speaking with truck manufacturer Tenco.

“They’re one of our vendors for dump boxes and plow equipment,” he said. “They have five Freightliner trucks, all identical, that meet our requirements up in Canada. The said they can suit them up and have three by next month. We’d get the remaining two by February.”

In the meantime, Willman said Franklin received trucks from Plattsburgh’s and Chateaugay’s town highway departments, and the town of St. Armand is offering them garage and storage space. The town of Clinton donated a basket to the Franklin with shop towels and a grease gun, Willman said.

“The response has been overwhelming,” he said.

Franklin is also currently looking for a spot to establish a temporary highway office.

“We’re in the middle of procuring mobile office trailer,” Willman said. “It has a bathroom in it, but coming up with a source for fresh water seems to be a costly issue. The effluent from the bathroom needs to be handled correctly. They have holding tanks for such a thing, but those need to be pumped every two weeks, so we’re looking for someone local who would be able to provide that service.”

After the fire occurred, U.S. Rep. Elise Stefanik tweeted about it, saying, “We will work as a community to rebuild after this destructive fire. I am committed to partnering with our local, county, and state officials to support the Town of Franklin.”

On Tuesday, Willman confirmed that representatives from Stefanik’s office did reach out.

“They were very nice,” he said. “I know we’re covered by insurance, but in situations like this, there are often unanticipated cost overruns. It’d be great if they could give us a line on the types of state and federal grants we can apply for.”

“The town of Franklin has suffered a devastating loss and I pledge to work with them to get them the necessary resources from the state,” he said. “As the cleanup begins, I applaud the many local officials and communities that have stepped up with equipment like the towns of Plattsburgh, Chateaugay, Dannemora, Harrietstown, & many others. Coming together in times and tragedies like this are what makes the North Country great and we will continue to help the town of Franklin in the coming days, weeks and months.”