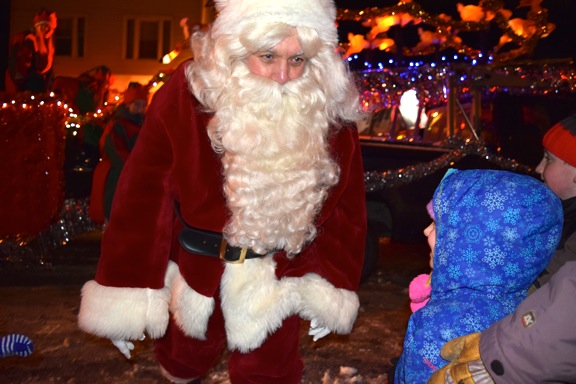 Santa Claus greets kids outside the Harrietstown Town Hall in Saranac Lake in December 2016. After arriving with his elves and Mrs. Claus in the Lighted Fire Truck Parade, Santa Claus met with kids in the town hall auditorium to hear their Christmas wishes. (Enterprise photo — Chris Knight)

SARANAC LAKE — St. Nicholas’s arrival to this municipality is imminent.

This Friday’s Light Up Saranac Lake celebration will feature fire trucks covered in holiday decorations, a Christmas tree lighting and a visit from Kris Kringle himself. This also coincides with the 35th annual Sparkle Village Craft Show at the Harrietstown Hall.

“They used to do the Sparkle Village, the tree lighting and the parade on separate days,” said Brendan Keough, Saranac Lake Volunteer Fire Department chief. “This year we figured let’s turn it all into one big celebration.”

Local fire department trucks decorated in Christmas lights and Babbo Natale will parade through downtown Saranac Lake from 6 to 6:15 p.m. Then Father Christmas will light the tree at Berkeley Green, and the Northern Lights Choir will sing carols. Afterward, Ded Moroz will be available in the Cantwell Room at the Saranac Lake Free Library from 7 to 9 p.m., where kids can tell him their Christmas wishes and take a photo.

Sparkle Village goes from 4 to 8 p.m. the same day. 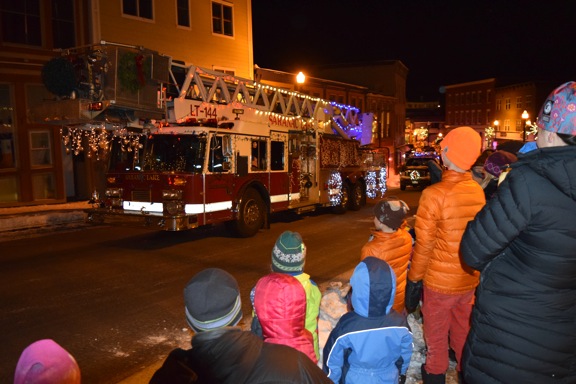 A crowd of people next to the Berkeley Green in December 2016 watches the Saranac Lake Volunteer Fire Department’s snorkel truck, which featured lights synchronized to Christmas music and was judged the best decorated vehicle in the department’s third annual Lighted Fire Truck Parade. The parade, sponsored by HomEnergy Services, included a dozen trucks decorated for the holidays from local fire departments and as far away as Peru, New York. (Enterprise photo — Chris Knight)

“There was a big blizzard in Buffalo that year, and we had some crews that went over there to provide mutual aid,” Keough said. “A few of the guys brought back photos of this fire department parade with Santa and said, ‘We ought to do this.'”

For many years, HomEnergy founder Dan Reilly had been bringing Pere Noel to Saranac Lake.

“That was always a one-man float. It wasn’t really a parade,” Keough said, “and when we called Dan about this idea, he was very excited.

“We threw the whole thing together in about two weeks. Everybody jumped in.”

In 2018, it was Reilly’s last year organizing the Santa Claus element of the parade.

“He passed the torch along to us,” Keough said.

This year, Keough said he wanted to expand the paraded trucks to include more than just fire engines.

“Every year, we have an award for the best-decorated fire truck, and we wanted to add a business award, too,” he said. “We’ve already got a couple of other groups all signed up. I know the Saranac Lake Central School District will have a bus. I think the (Adirondack Regional) airport is doing something with one of their big snowblower trucks. Hyde Fuel is decorating a fuel truck.”

The parade generally features more local volunteer fire departments such as those from Bloomingdale, Lake Placid and Tupper Lake, but some years have seen Plattsburgh, Peru and AuSable Forks make the trip to Saranac Lake, too.

“It gets a little bigger and bigger every year,” Keough said.

Keough said the parade is one of his favorite times of the year.

“We’re normally not dealing with people at the best times,” he said. “This gives the fire department another way to get involved with the community.”

Last year, after the parade ended, local fire departments had to rush to a structure fire in Bloomingdale, Keough said.

“We had just gotten our decorations off the truck when the call came in,” he said, “but other trucks showed up to the fire still with their Christmas lights on.”