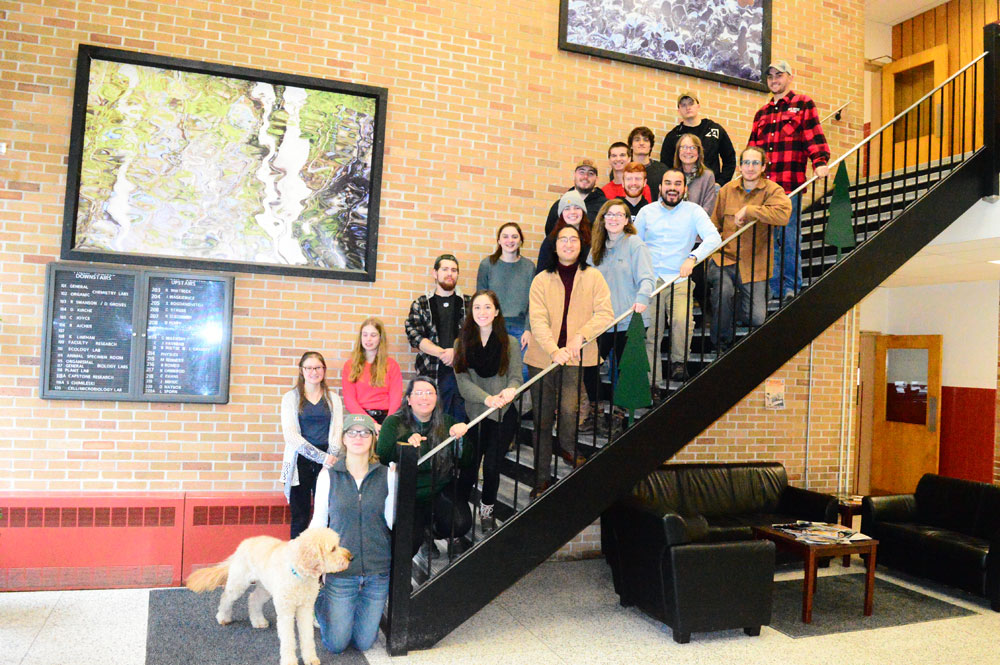 PAUL SMITHS — The work of 17 students and one dog in professor Lee Ann Sporn’s capstone class at Paul Smith’s College has again been entered into the state record.

“It’s fast and furious, isn’t it?” Sporn asked the class on their last day of the semester. “What we’re able to accomplish basically in a couple of months with this many people.”

These students are the only ones researching ticks for approximately a quarter of the state, geographically. They spent the semester gathering data on ticks’ push northward and upward becoming denser in population every year as they find new territory to survive in.

But their work doesn’t stop there. The data they gathered on ticks and the diseases they spread as the invasive parasite moves into the Adirondacks is used by the state Department of Health, and the impact of the project stretches beyond the campus.

“I think that this capstone is very unique,” said Adelaide Balliett, who owns a Goldendoodle named Leo who became the class’ mascot. “It has a real-life aspect. It’s not something that’s going to be forgotten after we finish this semester. I think that brings a lot of meaning to our work.”

One student even said she found a career path through the class.

Jordan Hackett processed most of the class’ geographic information system data, a fact which was confirmed by her classmates.

“I finally came to the conclusion that working with GIS data is something that I’m really interested in and I’m actually looking at going to get my master’s in it,” Hackett said.

She said she likes working with GIS data processing because “It’s hard to work with. It’s even more rewarding when you actually do figure it out.”

Data from the people

One group was tasked with “pounding the pavement” to find new sites, but the traditional method of using drag clothes to inspect an area turned up few results.

“Well, the drag out at sites were every unsuccessful,” Garrett Temples said. “We discovered two ticks total and they were both by accident.”

Their classmate, James Sweeney, found five while hunting in southern Hamilton County and the group developed an idea. They realized they were hearing more cases of people accidentally finding ticks in the wild than they were dragging cloths, so they developed a citizen science program.

This “more passive technique” started off as a survey just sent to Paul Smith’s College students, but Sporn’s students said most of their peers were likely to delete the emails without ever opening them.

“Our student body does not like surveys in emails,” Kegan Kleeschulte said.

So they expanded the reach to everyone, partnering with the Adirondack Mountain Club for a website where anyone could report a tick sighting. They received 188 responses, with 111 of those being within the Adirondack Park.

These results liked up with a predicted model map Sporn’s class drew up last year using data from another citizen science program, which involved testing deer blood from hunters for traces of tick diseases.

Tim Sweeney was part of the group tasked with outreach and education and said the kids they talked to were interested in ticks and Lyme disease, asking questions like if ticks poop.

They started at the Youth Climate Summit at the Wild Center in Tupper Lake in November with a “tick fashion show,” showing the kids how to — and how not to — dress when venturing into tick territory.

With group members dressed as ticks, in beekeeping suits and in tick-vulnerable outfits strutting the catwalk, they taught the kids about tick safety. Surveys handed to the kids about what they learned yielded positive results.

“Everything you presented and your interesting, even silly ways of presenting, stressed the seriousness of the problem but also helped alleviate some of the fear and taught ways of being careful,” Ashley wrote.

Johnathan Joaquin said that he liked the challenge of formatting their research to disseminate it to kids.

“I would say it was definitely a little difficult for me, changing my information from what I know down to a kid’s level.”

Many of the students said they have had tick bites before, as they come from areas where that is more common.

“It’s kind of ironic,” Sporn said. “A lot of them live outside the park where ticks are abundant and then they come here to study, where they aren’t.”

She said while ticks are not abundant, the Adirondacks are an emerging area and a great place to research ticks. A third group spent the semester at a site in Elizabethtown which has an especially dense tick population.

At the site near the North Country Society for the Prevention of Cruelty to Animals they found 462 ticks in two hours. In the fall semester they found 1,800, total.

Sporn again said her research will eventually need a staff member as the need for tick research rises and to keep consistency across her semesters.

Sporn’s student research for the past few years was funded by the state Senate Task Force on Lyme and other Tick Borne Diseases, and the data they gather is used by the state Department of Health.

However, that state funding disappeared last year as the Democratic Party took the majority of the state Senate. When the party majority flips, all task forces are eliminated, and the Senate has yet to reestablish a tick task force.

Sporn and around 20 other tick researchers are in a lobbying group that will go to Albany on Feb. 11 to ask the state Senate to reinstate $1 to $1.5 million in funding.

Until then, Sporn said she is asking The Cloudsplitter Foundation for funding for more public school education in the spring.

College Provost Nicholas Hunt-Bull, on seeing the class’ results at the end of the semester, commented that he thought this was Sporn’s best work group yet.