Not too late to get a tree

Colleen Wimsatt nears the end of assembling 51 baskets for the Sagamore resort in Bolton Landing in the back room of Moody’s Tree Farm in Gabriels on Monday. (Enterprise photo — Aaron Cerbone)

David Gonzalez carries a tree to a car at Moody’s Tree Farm in Gabriels on Monday. (Enterprise photo — Aaron Cerbone) 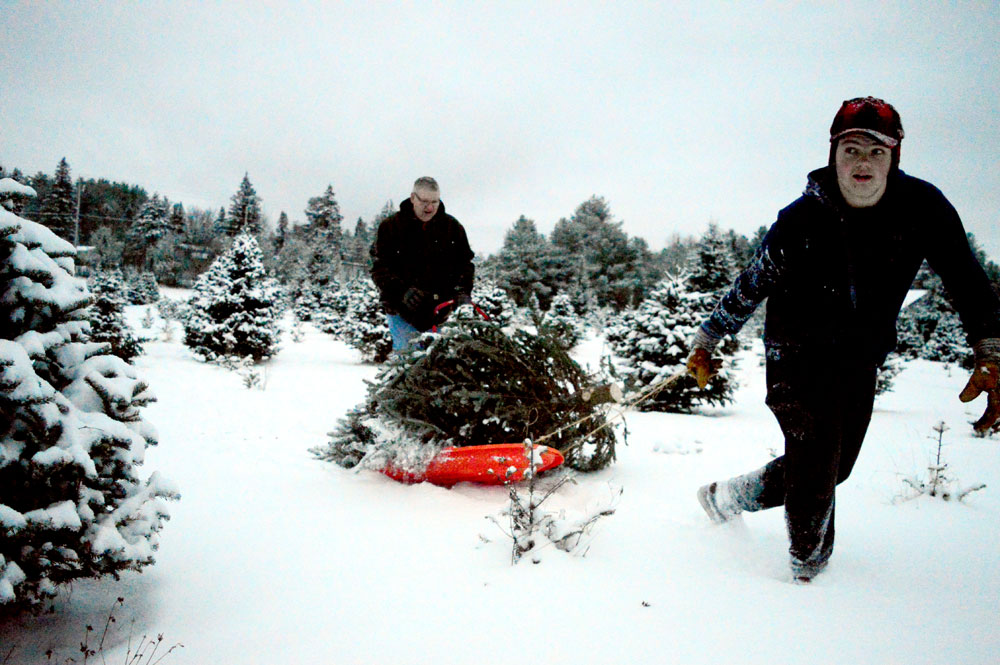 If you are a holiday procrastinator, or if you choose the old tradition of getting a tree right before Christmas, there’s no need to feel like a sap.

There’s still plenty of trees left at local farms, whether you’re cutting your own or buying one pre-cut.

An Enterprise poll conducted from Dec. 2 to 8 asked readers about their tree plans. While the largest portion of the 418 respondents — 39.39% — said they are buying a real tree for the holiday season, a large amount said they will settle for an artificial tree — 30.66% — or go with no tree at all — 28.54%.

Real trees present an additional hassle during the holidays, spreading needles and sap throughout the house. They need to be watered regularly or else they’ll become fire hazards. But do you know what else is needy, creates a mess and requires a lot of responsibility? A child. And that’s what this season is about, isn’t it?

Plus, putting up with the work it takes for a genuine tree means you can reap the rewards of a perpetually aromatic home and the absurdity of hosting a 7-foot conifer in your living room for a month or so. 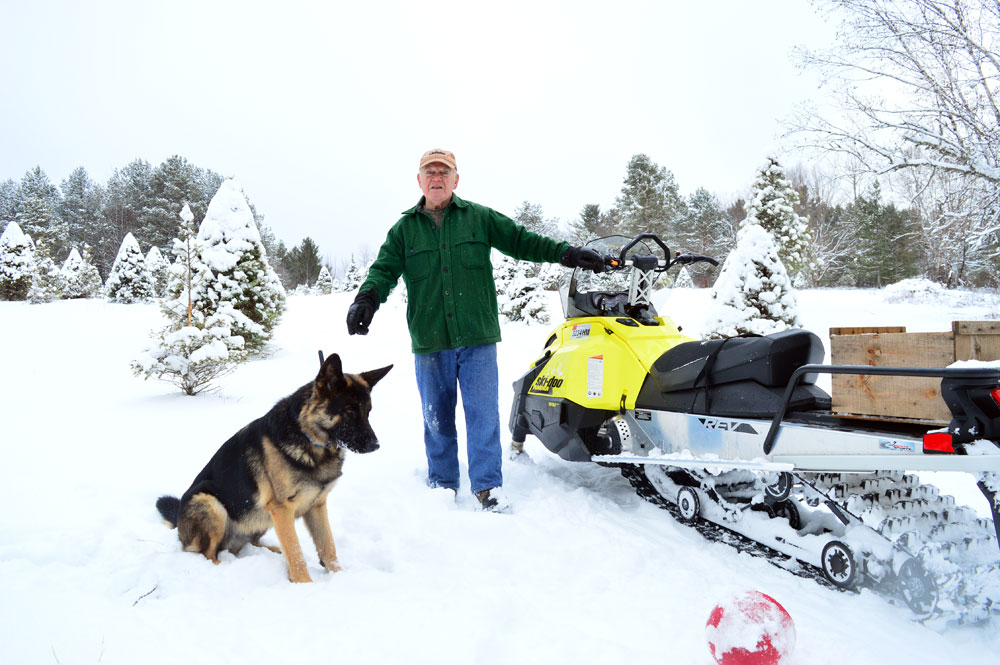 For those whose abodes cannot abide a full tree, don’t forget, there’s no shame in a 2-foot Charlie Brown-style evergreen.

Trees are relatively cheap, too. Moody’s sells firs for $7 a foot. At Walt Kretser’s, he is selling pine trees for as low as $10 as he is shifting his sapling selection to include more balsam trees. 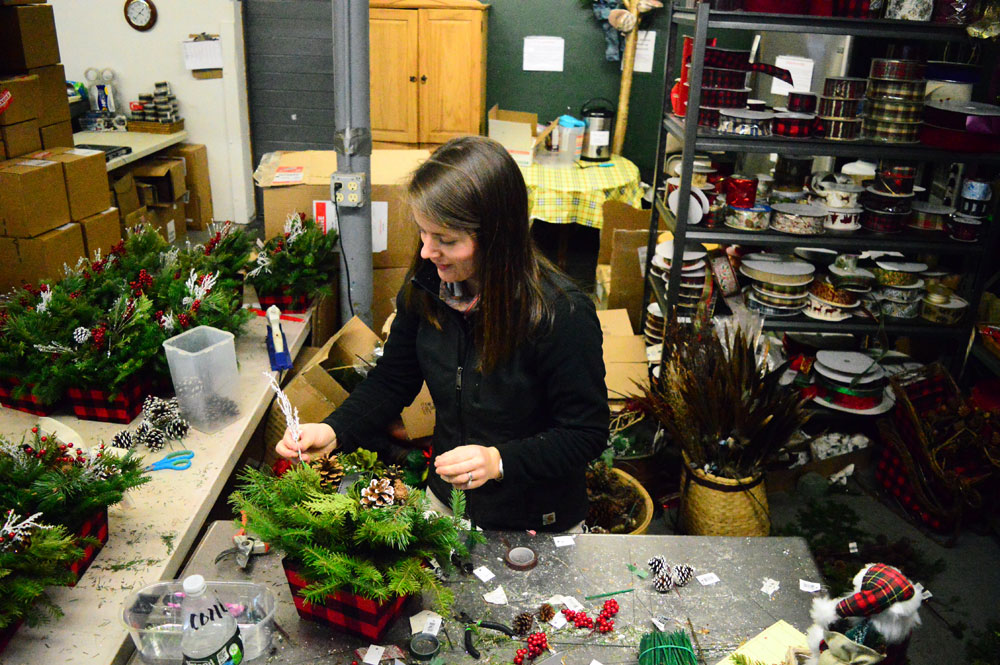 Colleen Wimsatt nears the end of assembling 51 baskets for the Sagamore resort in Bolton Landing in the back room of Moody’s Tree Farm in Gabriels on Monday. (Enterprise photo — Aaron Cerbone)

Walking into the shop at Moody’s Tree Farm in Gabriels, one is immediately hit with the sharp smell of balsam needles.

The pleasant, green fronds are everywhere: spilling out of baskets, popping out of drawers and arranged in circular wreaths of all sizes, each assembled by Jessica Genaway. These wreaths cake the walls of the hallway winding through the store in an enveloping, claustrophobic fashion.

The greenery is ever-present throughout the entire building. In the back room, Mary Kelly and Colleen Wimsatt construct baskets of winter garland. A group of garland gatherers have supplied them with a bounty of berries, grasses and pinecones to create the uniquely Adirondack Christmas decorations.

The whole store is put together like an artistic gift basket.

On weekends the store is swamped with kids eating cookies, adults drinking cocoa and people walking in and out to shop, to warm themselves by the fire pit or to cash out their freshly chopped trees. 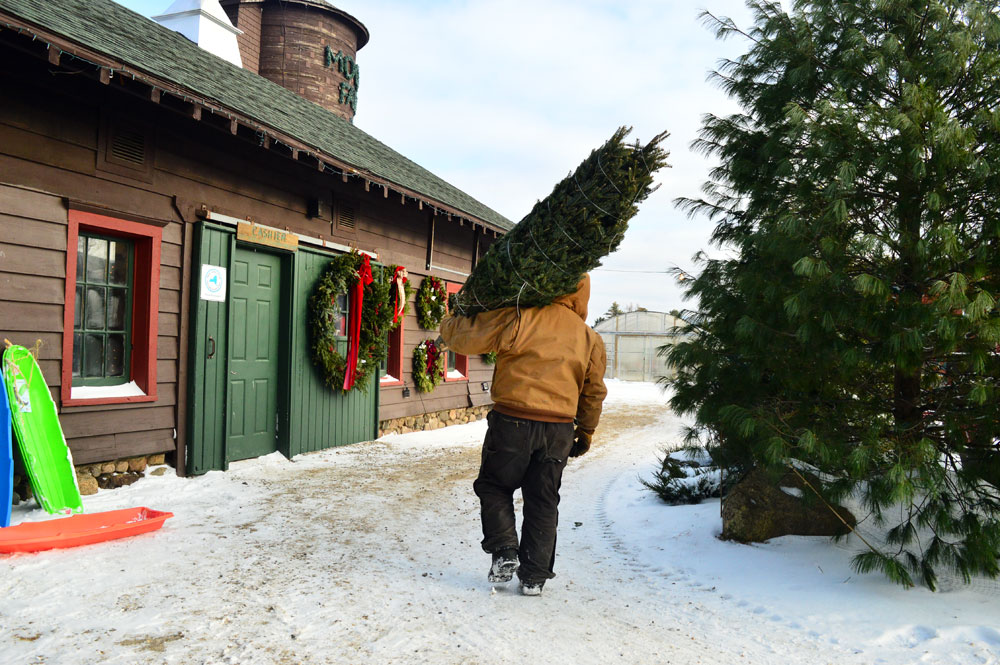 David Gonzalez carries a tree to a car at Moody’s Tree Farm in Gabriels on Monday. (Enterprise photo — Aaron Cerbone)

Dupree said it is hard work for his family, running the tree farm, but when they “get into the spirit,” it is worth it.

Dupree said last Saturday, Dec. 14, was a very busy day for the farm. They sold 120 trees, which he believes is a record for the shop. Usually they’ll see the sale of around 1,500 trees in a season, with around 30% of those being chopped by customers themselves. This year, he said the season has been condensed into a short time period because Thanksgiving came later than usual.

Outside is where the real business takes place. Balsam and Fraser firs are stacked in abundance around the fire pit, saws and sleds lean up against the building, waiting to be taken out to the field and David Gonzalez bales trees into tight, cigar-shaped bundles to be taken home atop a car.

Out in the field, shoppers appraise the trees, wading through the snow, shaking the branches free of snow and either nodding approvingly or cocking their heads skeptically before looking around for a better tree.

It takes around eight years for a tree to grow to a traditionally acceptable height, Dupree said. He said every spring it looks like there might not be enough to last the season.

“You’ll look out into the field and be like, ‘We got all these little tiny trees. What are we going to do?'” he said. “And then at the end of the summer, they just take off.”

Some people know it as Kretser’s Tree Farm, but Walt Kretser doesn’t like any name that formal for his 15-acre tree laboratory. These fields on Cold Brook Road in Vermontville are not so much a commercial enterprise as a “hobby farm,” as he calls it.

Right across the street at Christmas Trees by Don Hamm, there are trees a-plenty and kind staff to help with the loading. There’s no bitter rivalry between the neighbors — at least, Kretser doesn’t think so.

“It looks like it when you come up here and see the signs,” Kretser said. “But … as far as I’m concerned, no.”

The two run completely different operations, and though Kretser admits there naturally is “some competition,” he said he frequently sends people across the street if they are looking for bigger trees.

Kretser sells only around 75 to 100 trees in a year. He said he has no desire to sell his trees wholesale or to expand the farm to anything more than a fun experience for local families, giving them a place to walk, ski or snowshoe through his expertly landscaped woods, catch views of Whiteface Mountan from his new lean-to and take home a Christmas tree for cheap.

He said kids sometimes spend two or three hours back on his property, frolicking in the snow long after the tree has been secured to the roof of their parents’ car.

Kretser is a self-described “frustrated forester.” After growing up in Indian Lake, he graduated from the University of Michigan but failed to find forestry job in the states. In the Army he worked with Jagermeisters (foresters) in Germany. Then he was put in charge of New York state’s acid rain program and later worked in fisheries.

But rain and fish were not his passion. Planting trees was. And he still had the itch.

So when he bought a potato farm in Vermontville in the 1970s, he immediately started planting the brush fields with trees, some of which now exceed 50 feet in height. He’s been planting trees ever since, experimenting with different types: Douglas firs, red pines, trees from Europe, trees from the American West, and trees from all over New York.

Some of these trees catch, some don’t, but Kretser’s goal is not a 100% success rate. It is the experimentation, the process.

He’s even experimented with what he calls “oddball” trees; for which he lets the early horizontal branches grow out before they grow up, producing two to four trees from one base in the ground. He said some people come to buy these double trees for their homes.

Kretser tends to these trees meticulously, pruning them to perfection in a near-geometrical cone shape. He has no employees and does the work himself, including cutting the grass to let his blueberries grow in the spring.

His years of landscaping and experimentation have resulted in a beautiful experience for people to walk, ski or pull a sled through.

In each of the Tri-Lakes towns there are roadside stands, too. For instance, Moody’s Tree Farm supplies trees to the stand in the Coakley Home and Hardware parking lot in Saranac Lake and near the ‘Dack Shack restaurant in Lake Placid.

In Tupper Lake there is a stand outside the SmokeHouse Tex Mex Grille, run by the restaurant co-owner Bill Patterson, and trees sold at Larkin’s Junction Depot, next to an classic bright red truck.