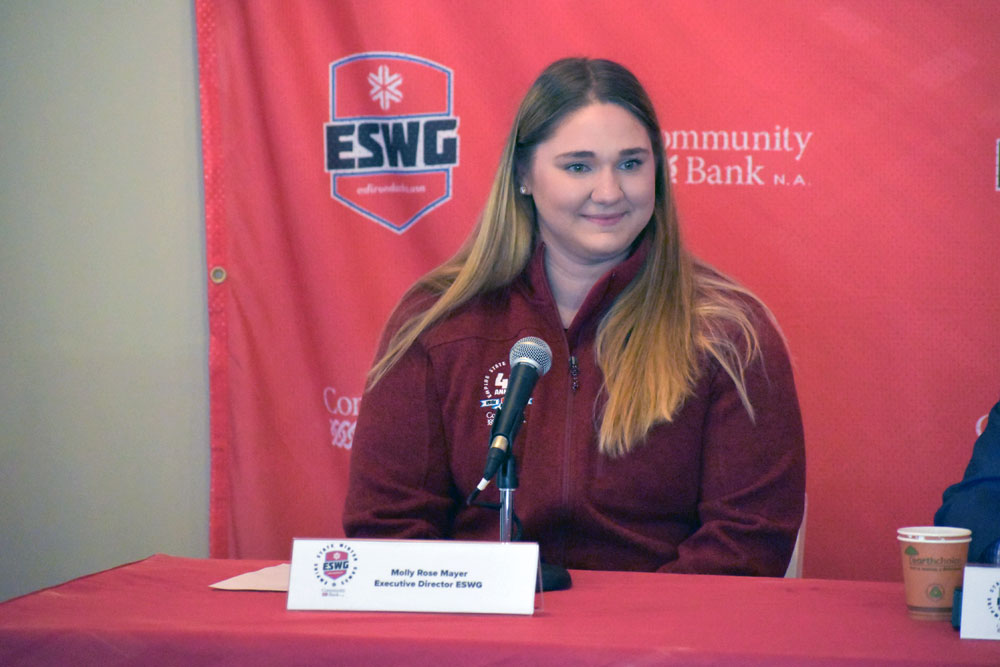 The 2020 ESWG are expected to kick off Jan. 30 across the Tri-Lakes region.

“Everybody knows the tradition and history of winter sport here is unrivaled across the country,” said Community Bank CEO Mark Tryniski. Community Bank is returning as a title sponsor for the Games next year. “The games continue to get bigger and get better. We’ve added some exciting new sports this year and it continues to gain momentum consistent with the investment into the venues.”

— Next year’s games will incorporate a new para-bobsled push category, marking the first time the sport will be included in an international competition, according to Olympic bobsled driver John Napier, who serves as program coordinator for the sliding track.

“We’re going to have the first-ever bobsled push event for lower-level amputees,” Napier said at a press conference Wednesday at the Olympic Jumping Complex.

The goal is to ultimately see the sport included in the Olympic Games.

“We were told by the international committee that the United States — we have to foster that program and we have to be leaders in that,” Napier said. “The ESWG is a huge part of that. This is the first event we’re going to open up to national and international sliders, and it’s going to be great to lead the way for this para-bobsled event.”

Napier said para-bobsled began as a sport about a decade ago.

The ESWG will also team up with the Eastern College Athletic Conference next year to bring four top-placing e-sports teams in “Overwatch” to Lake Placid, according to ESWG Executive Director Molly Rose Mayer. The ECAC is inviting 60 teams to compete in an “Overwatch” competition.

A new collegiate category in ski jumping is also being added to the schedule, Mayer said.

“That’s an exciting new addition to include the colleges around this area,” she said at the press conference.

The additional sports categories at the 40th ESWG push the total number of categories above 30, according to Mayer. The games features a slew of events that range from winter biking to hockey, bobsledding and figure skating to broom ball, as well as adaptive versions of many sports such as alpine skiing, cross-country skiing and snowboard cross.

Also new this year will be a second athletes’ village at the Civic Center in Tupper Lake.

Last year, the ESWG village on Main Street in Lake Placid featured a large TV live-streaming the events, musical performances, a two-stage, 750-foot zipline and a snow tubing hill, plus the Taste of the Games, a food and drink festival where guests can eat special dishes from 22 different restaurants and sip craft beers. The bike cross, bike circuit and NorX events also took place in the village.

The athletes’ village in Tupper Lake will be a pared down version of the original village seen in Lake Placid in 2018. It’s expected to feature music, hot chocolate, s’mores and games for kids. There is no broomball planned for this year.

Organizers are expecting 2,500 athletes to travel to the Tri-Lakes region for this year’s ESWG, a similar projection to the number of athletes expected at the 2023 Winter World University Games.

Organizers also anticipated 2,500 athletes for last year’s ESWG, but according to attendance numbers cited by Mayer, the games ultimately fell short of that projection by roughly 200 to 300 athletes.

Mayer said some sports, including figure skating, had to be capped because the expected number of athletes exceeded capacity. Around 2,000 medals will be awarded throughout the 2020 ESWG.

The first Empire State Winter Games was held March 13-15, 1981. The event was announced as an extension of the Empire State Summer Games, which were held in Syracuse in August 1980. Organizers of the first winter games — who had six weeks’ lead time to put together the event — contended with record-breaking warm weather that year, according to a 1981 Enterprise article. The first winter games attracted around 350 athletes across five contests and a figure skating exhibition. A significant portion of those athletes — more than 50 of them — were from the Tri-Lakes region.