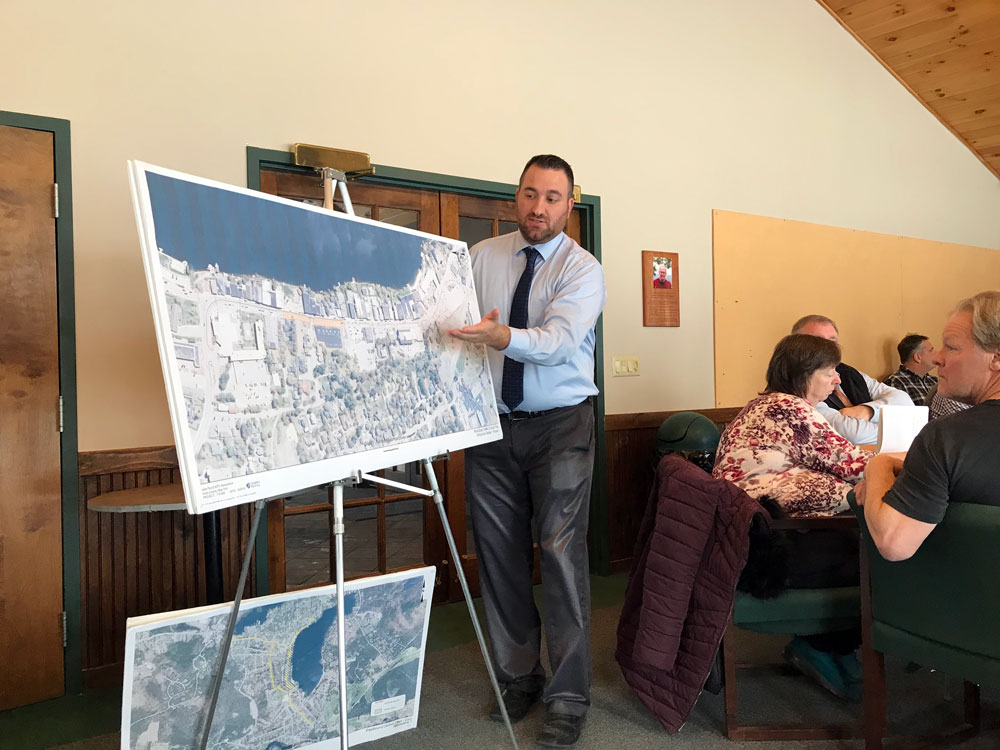 Creighton Manning engineer Tony Christian talks about measures that will be taken to control traffic along Main Street while portions of the road are under construction. (Enterprise photo — Elizabeth Izzo)a

LAKE PLACID — Planning that will reshape the look of Main Street continues — but not without controversy.

The Main Street task force, a group of more than 15 local officials, business and education leaders, planners and community members, met Wednesday to discuss plans for a projected $8 million overhaul of the business district’s streetscape and underlying infrastructure.

What’s been revealed of the project so far has sparked some outcry from local business owners who say the addition of more parking should be a higher priority — and the public should’ve been consulted sooner.

The project, which is years in the making, is being billed by local officials as a way to rebuild aging water infrastructure so it can support increased use, as an opportunity to revamp the street’s look with sleek new sidewalks and green space, and as a big step forward in the ongoing effort to protect Mirror Lake from salt contamination.

Grant funding has been secured, a two-season construction timeline leading up to completion before the 2023 World University Games has been set, and the task force is being asked to review the village’s preliminary streetscape designs and offer recommendations for how to improve them.

Not everyone is happy with what they’ve seen so far.

Multiple business owners are decrying what they see as a planning process devoid of public input. Some of them say this lack of community collaboration has resulted in streetscape designs that don’t meet the needs of those who live and work on Main Street.

“None of us had a chance to say our opinion,” said Debra Lennon, owner of Darrah Cooper Jewelers.

Lake Placid Mayor Craig Randall said members of the Main Street task force were specifically chosen to represent a diverse swath of the community. The village is also planning to have a public information session in January.

But Lennon says that meeting is “too little, too late.”

“It feels like it’s already been decided on,” she said. “It feels like (the public meeting) is going to just be a step. I don’t think any comments or information — the people’s voice — is going to be taken into consideration.”

The village is aiming to put the first phase of the project out to bid in March, with construction expected to kick off by May.

The village’s board of trustees will have the final say on the designs before they go out to bid, according to Randall.

For many in the community, the project’s stakes are high. The local economy is fed by tourism. Some business owners worry their storefronts won’t be easily accessible during the peak summer tourism season as construction unfolds.

“There are a lot of business owners here with concerns about the viability of their business two years from now,” said Margie Philo, owner of real estate firm Berkshire Hathaway Adirondack Premier Properties. “Right now, I don’t think there’s a good, thoughtful plan.

“I think it’s possible in two years we’re going to see a lot of empty stores on Main Street.”

Though construction crews aren’t expected to be working on weekends, according to Creighton Manning engineer Tony Christian, the plan is to set up work zones and limit traffic to one lane on Main Street during two construction seasons. Trucks that aren’t making local deliveries will be diverted onto Old Military Road, the construction crew will have someone on hand to direct traffic, and a temporary traffic signal will be set up.

Task force member Mary Jane Lawrence, chief of staff at the Regional Office of Sustainable Tourism, said the village should consider including a clause in the construction contract limiting work to days when there aren’t major events happening.

Some business owners are also concerned that visitors will be deterred from Main Street if any curbside parking is removed.

The Main Street plan, as it stood Wednesday, appears to call for the removal of 18 parking spaces, according to an analysis compiled by town engineer Ivan Zdrahal and village Department of Public Works Superintendent Brad Hathaway. The spaces available on the street, in the three municipal lots and on Mirror Lake Drive would decline from 435 to 417, after loading zone hours.

“It’s clear that there isn’t enough parking on Main Street now. There hasn’t been for almost 30 years, and the leadership in the town and village should have been addressing a parking garage to add parking so visitors will feel comfortable coming to Main Street,” said Philo. “The locals constantly vocalize that they don’t shop on Main Street because there’s no place to park. To take away parking doesn’t solve our problem, it adds to the problem.”

Local officials have long discussed building a parking garage on Main Street. A possible parking structure was included in early conversations about the Main Street project, but Randall said it’s no longer on the table.

“With that amount of parking we would’ve had to have a turning lane on the street to handle left hand turns,” he said. “That lane would have eliminated six to eight parking spaces, which the street didn’t want to happen.”

As part of the Main Street project, the village is also planning to create some small green spaces at crosswalks.

What these spaces will ultimately look like is undecided, but preliminary designs revealed at the task force’s meeting Wednesday show neat clusters of trees and foliage, surrounded by custom fencing accented with metal pinecone and evergreen tree details.

“Green space is wonderful,” Philo said. “We live in a 6 million acre Park with green space. So there’s plenty of green space.”

She said taking away parking space for green space is “unacceptable.”

The green spaces are a requirement of some of the grant funding the village received for the Main Street upgrades, according to Randall.

“It has to do with creating permeable surfaces,” he said. “We have serious issues with storm water and we have to do something about it.”

Randall said some Main Street businesses have experienced flooding in the past, in part because storm water has at times risen above the curb level. He also said the storm water runoff into Mirror Lake is an ongoing concern.

“Those are all issues that we’re aware of that this project is designed to handle in a different way,” he said. “We need to get it started in 2020 and we have to finish it substantially in 2021, so we’re not interfering with events more than we absolutely have to.”