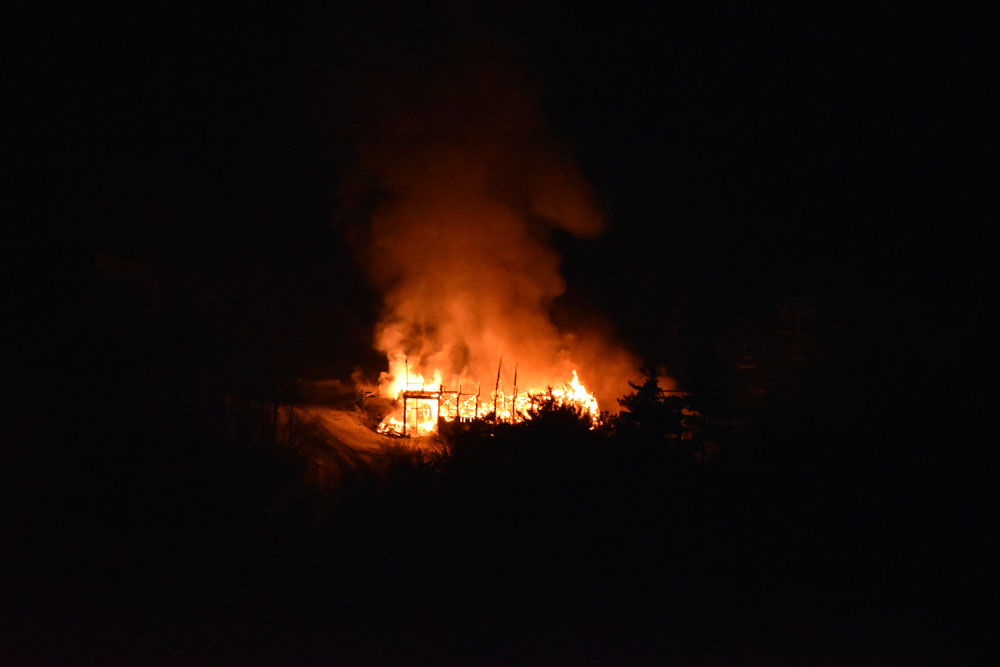 WILMINGTON — A beloved ski lodge at Whiteface Mountain is gone.

The Mid-Station Lodge was destroyed by fire Saturday night. No one was injured.

The blaze was reported by staff at the Mid-Station at 8:52 p.m. Saturday, according to Wilmington Volunteer Fire Department Chief Louis Adragna.

Adragna lives not far from Whiteface. He said he could see that the Mid-Station was “fully involved” from state Route 86, after receiving the initial call.

The building burned until 12:30 a.m. Sunday. The fire did not spread to surrounding areas.

The rest of the ski area at Whiteface Mountain was operating as normal by Sunday morning.

Before firefighters arrived, staff at Whiteface attempted to contain the fire using snowmaking equipment, which draws water from the base of the mountain.

Adragna alerted dispatch and the Wilmington fire department responded shortly after 9 p.m. with just two vehicles, knowing they wouldn’t be able to reach the blaze with their equipment. The department convened at the bottom of the mountain to quickly piece together their strategy for containing the fire.

“This was a challenge just because of the location of it,” Adragna said. “If it was in the summer, they have access roads. But it’s winter. We had Snowcats and snowmobiles, that’s about it. I’ve never ran into a challenge like that before.”

State Police were called to the scene because a crowd of onlookers had gathered and emergency vehicles couldn’t get through, Adragna said. State Police cleared the scene and redirected cars at the ski area’s main entrance, where passersby continued to attempt to enter the complex past 10:30 p.m.

Six firefighters were transported to the lodge with Snowcats and snowmobiles. The building had been burned down to its frame shortly after 10:30 p.m.

From the Wilmington Notch, the night sky could be seen alight with a muted red hue.

Firefighters used snowmaking equipment to keep the fire from spreading to the chair lifts and other surrounding areas as the flames destroyed Mid-Station Lodge, according to Adragna. The building was still burning at midnight Saturday. The snow-making crew at Whiteface stood by and monitored the fire.

Adragna estimated it was around 5 degrees at the Mid-Station that night. He thanked the Whiteface staff who helped the departments contain the fire.

“Nobody was hurt, and that’s the biggest thing,” he said. “What happened — it’s a loss for the Adirondacks, but nobody was hurt.”

Investigators from the state Office of Fire Prevention were expected to begin going through the rubble to search for a cause of the fire at 8 a.m. Sunday.

The last fire at Whiteface ORDA Communications Director Jon Lundin could recall was two years ago when there was a minor fire at the ski school building.

Whiteface was running at full capacity Saturday and welcomed more than 1,200 skiers at the mountain.

“Whiteface will be at full operations tomorrow,” Lundin said Saturday night. “I don’t anticipate this will impact our operations at all.”

Asked if there had yet been discussions about the future of the Mid-Station, Dady said ORDA will be waiting before making any decisions.

“We’re evaluating the scene and waiting to make decisions upon further investigation,” she said.

The Mid-Station housed two restaurants, including Boule’s Bistro on the lower level. It is located between the Lower Valley and Upper Valley runs. The bottom terminals for the Little Whiteface and Mountain Run chairlifts are near the lodge.

The Mid-Station was built in 1960 — with “modern Swiss design” — for around $170,000, according to a Dec. 8, 1960 article in the Lake Placid News. It had ceiling-to-floor glass walls with views over the mountain’s “mixing bowl” area, where the upper trails converged at the mid-point of the mountain. The lodge was built with the intention of relieving some of the congestion at the base lodge. When it opened, it housed a restaurant that seated 125 people on the main floor. The lower floor had restrooms and a first aid room. A balcony completely surrounded the lodge. A dedication ceremony for the new lodge was held in February 1961.

“Some of my favorites were as a teenager, before the ’80 Olympics,” he wrote. “The lodge was a little run down, and was used mostly by local skiers who would pack their lunches and drop their stuff off on the first run. We’d gather for lunch to enjoy the spectacular view, and relative peace and quiet. And usually there was a breakneck run to get to retrieve your backpack before they locked up ahead of the close of the mountain. I’m sure the lodge will be beautifully rebuilt, but the patina and history are gone.”

In wake of the fire, state and federal lawmakers weighed in on the loss over the weekend.

“Whiteface was dealt a terrible blow with the loss of Mid-Station Lodge to fire last night,” Assemblyman Dan Stec, R-Queensbury, wrote on social media Sunday. “Thank you to all the Wilmington, First Responders for their efforts yesterday and everyday! Together we will move forward!”

Rep. Elise Stefanik, R-Schuylerville, said it was “absolutely devastating” to read about the fire at Whiteface.

“Thank you to our brave first responders who are answering the call on the mountain on a cold night.,” she wrote on social media Saturday. “The entire NY21 community stands with Whiteface as we rebuild.”