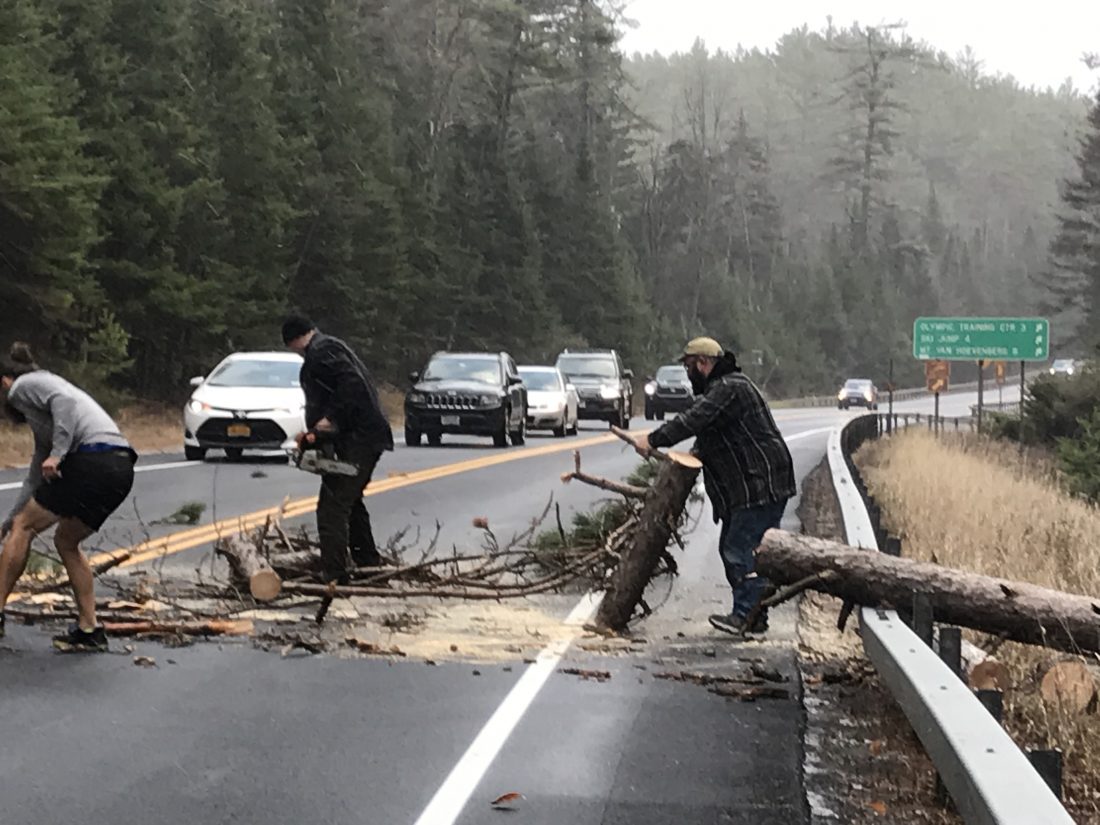 Gov. Andrew Cuomo declared a state of emergency in 11 counties, including Essex and Hamilton. Two hundred members of the National Guard, plus state Emergency Operations Center staff, were dispatched to help local municipalities. Separately, Essex County and the towns of North Hudson and Keene declared their own states of emergency and urged people to stay off the roads until further notice, with the exception of “essential personnel.”

At 8 p.m., the New York State Electric and Gas Corporation’s online map still showed that 4,907 of its 9,814 customers in Essex County were in the dark. That number had dropped by 10:10 p.m., when NYSEG announced that 4,512 of its 14,066 customers in Essex, Franklin, Hamilton, Clinton and St. Lawrence counties were without power. The company said it expects to restore power to 95% of those by 3 p.m. Sunday.

Forty-three Essex County roads were still closed at 6:30 p.m., down from a peak of 57 around 11 a.m., according to county Emergency Services Director Don Jaquish. At one time those included a portion of state Route 73 in Keene Valley and state Route 9N between Keene and AuSable Forks, but they have since reopened. 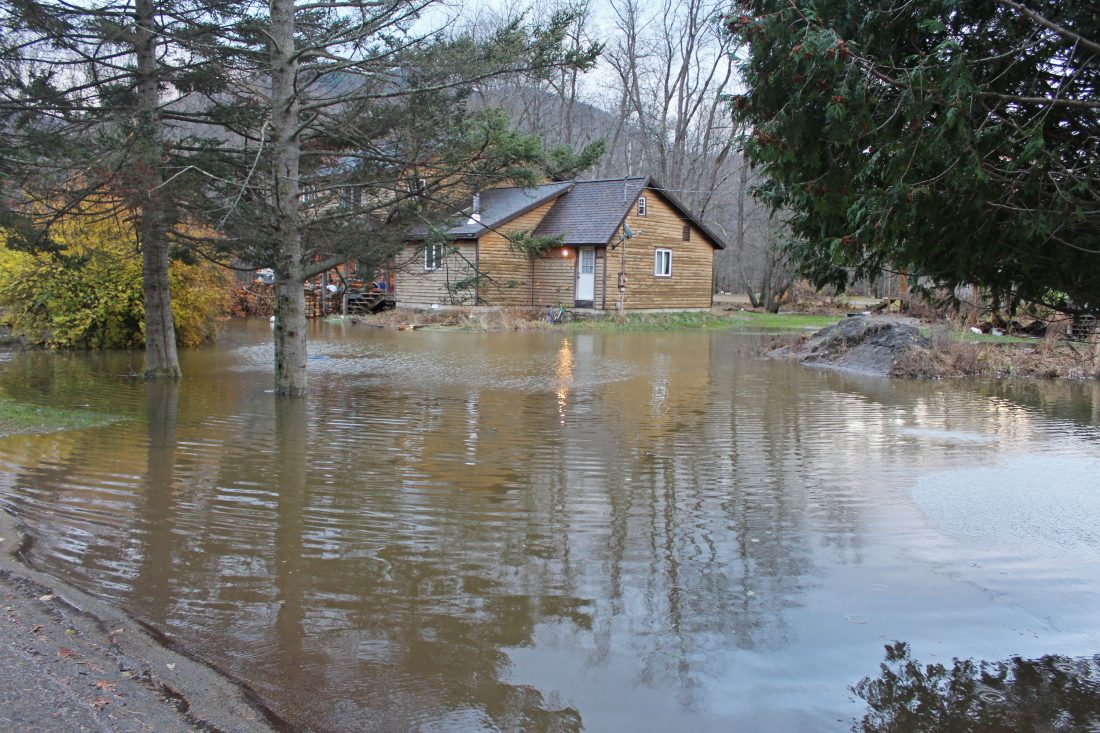 Jaquish said there was major damage to homes and roads, but water levels started to recede in the evening.

“We’ll assess the damages in the morning when it gets light out, but things are more under control now,” he said at 6 p.m.

Jaquish said emergency crews had to evacuate a few people and their pets.

“They were in places like Blue Ridge Road (in North Hudson) and a few others,” he said. “We removed six people and seven animals.”

A section of Route 73 between Marcy Field and Route 9N was temporarily closed after floodwaters undermined the stability of the road, but it had been reopened by 5:45 p.m., according to Kathy Smith of Lake Placid, who said she had driven through it. Jaquish confirmed that. 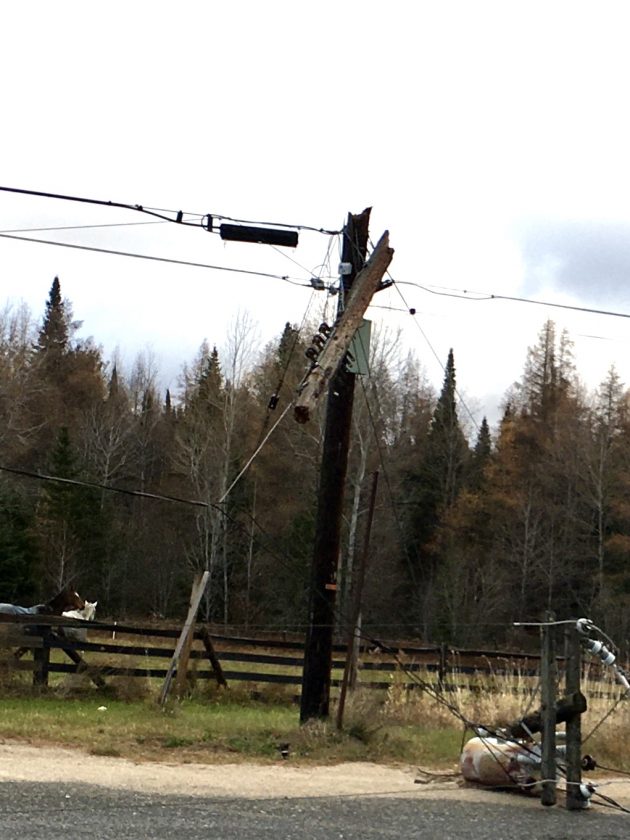 The state Department of Environmental Conservation warned hikers to avoid trails and mountain summits throughout the Adirondacks this weekend, due to the flooding.

In North Hudson, town personnel and DEC staff were dispatched with a DEC airboat to help evacuate residents displaced by flooding of the Schroon River.

Because Essex County was put under a state of emergency, all government offices were closed and early voting at the Public Safety Building in Lewis was canceled for the day. North Country Community College canceled classes in Saranac Lake, USA Luge called off its national championships in Lake Placid for the day, and Saranac Lake High School canceled Friday night’s performance of its school play, “A Wrinkle in Time.” 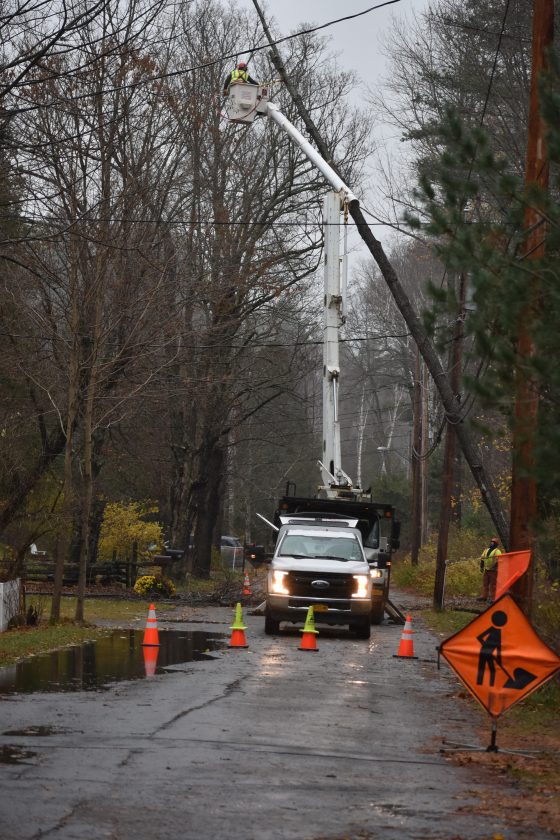 Utility crews and firefighters were still responding to a steady stream of trees falling on power lines into Friday afternoon.

In Essex County at 4 p.m., nearly 800 customers were without power between Wilmington and Jay, and nearly 400 in Upper Jay, according to the NYSEG online outage map. NYSEG also showed 215 without power in Keene and Keene Valley at the time, and 100 in AuSable Forks.

At that time National Grid’s online map showed 655 customers affected in the area of Santa Clara and St. Regis Falls, 238 in the town of Franklin, 132 in the town of Tupper Lake, more than 100 in the town of Black Brook and scattered outages in the towns of St. Armand, Harrietstown and Brighton. 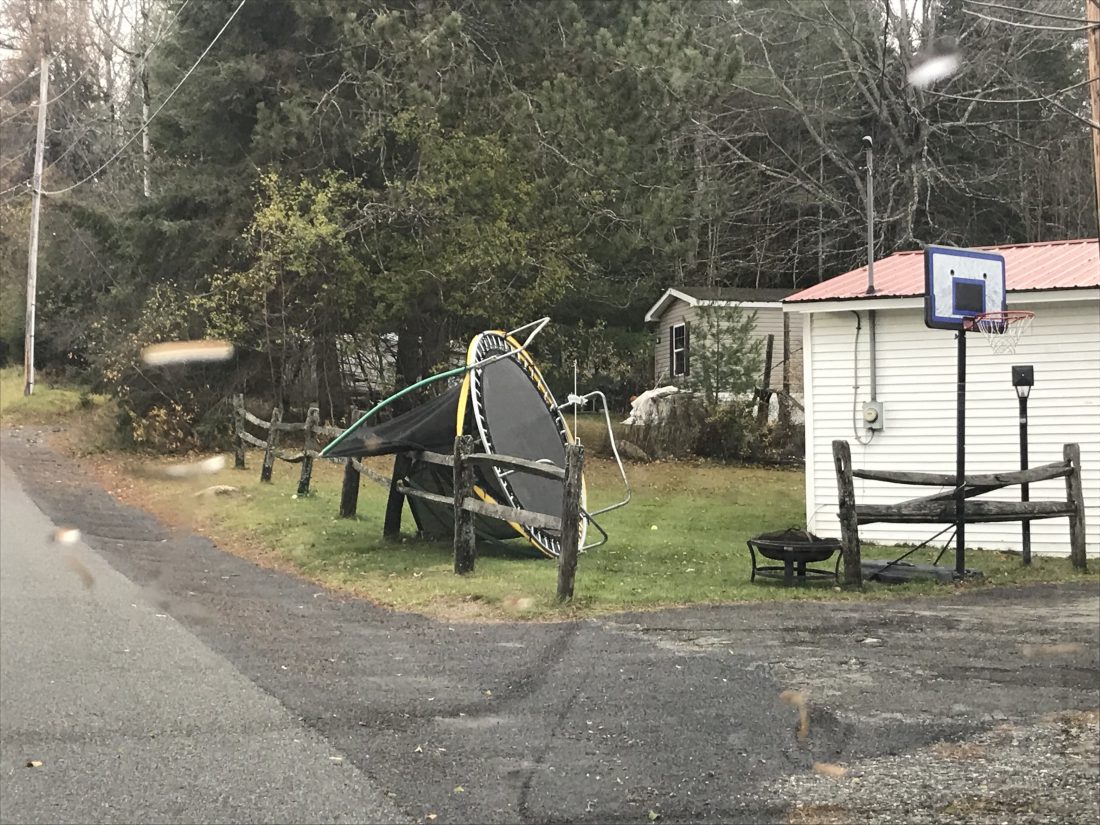 The National Weather Service office in Burlington. Vermont, showed the highest wind gusts in its service area on Whiteface Mountain, at 72 mph. The next highest were in Ticonderoga at 55 mph and Saranac Lake and Lake Placid at 53 mph.

By mid-morning, snow was falling in Saranac Lake, the first of the season in town, not just on the mountains. Trees came down on power lines in multiple areas, such as Old Military Road, Old Lake Colby Road and behind the Saranac Lake Shopping Center on Lake Flower Avenue. 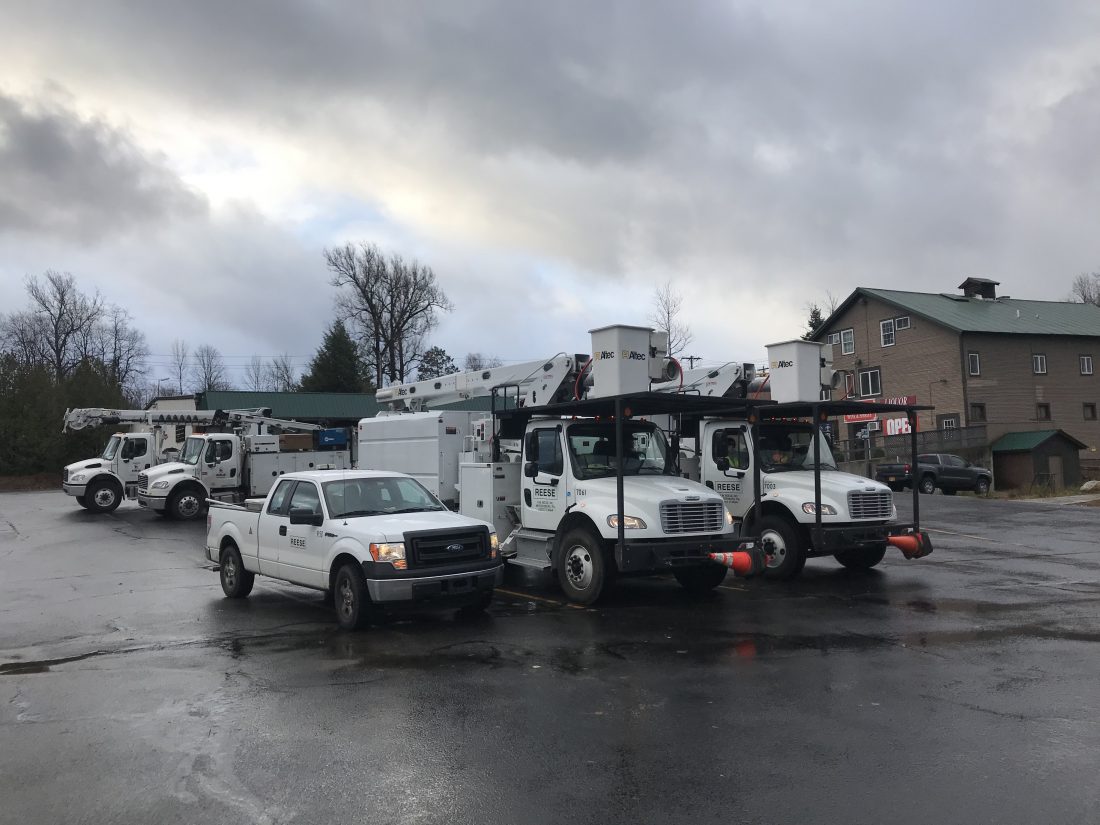 The National Weather Service in Burlington said the heaviest rainfall in its northern New York service area took place in the Tupper Lake area and in central and southern Essex County. Weather spotters’ unofficial rainfall measurements from the prior 24 hours showed Elizabethtown, Tupper Lake, Schroon Lake, Keene Valley and Ticonderoga getting more than 3.5 inches of rain. Parts of Vermont got even more.

Many of the areas that flooded are along the East and West branches of the AuSable River. The river peaked at 11.5 feet and had receded to 11.27 feet by 11 a.m., according to Essex County Emergency Services.

The AuSable River Association said on social media Friday this was the “first major flood since Irene in the Ausable Valley and beyond.”

“The river crested in the past hour after at least 1.8 inches of rain fell swelling streams. Many local roads and bridges are closed and many of our neighbors homes and business have been affected,” the association wrote.

Naj Wikoff of Keene Valley, a columnist for the Lake Placid News, said it was flooded all along Route 73 from the Mountaineer outdoor gear store to past Beede Road, “though not as high or for as long (as) with Irene.”

Many buildings had water inside; McDonough’s Valley Hardware in Keene Valley had 4 to 6 inches of water, Wikoff said Friday.

“This afternoon the inside of the hardware was filled with fans as they try to (dry) out,” he wrote in an email. “The(y) managed to get most stuff off the floors and bottom shelves, not some stuff but not nearly as bad as the last time (with Irene).”

Rivermede Farm in Keene Valley and its market on Route 73 were also hit, according to owner Rob Hastings.

“We are sorry to let you know there was significant damage to both farms at Rivermede,” Hastings wrote on social media Friday. “Keep the Rivermede families and farms in your thoughts.”

He said his farm’s market in Keene Valley was closed Friday while they “clean up and assess the damage.”

At 10 a.m., Jaquish said his office and crews were “overloaded at this moment.”

“We’re just having a lot of issues right now,” he added.

River Road in Tupper Lake, on the Raquette River, is typically one of the first places in that town to flood, but River Road resident Dan McClelland said he hadn’t seen any flooding as of Friday morning. 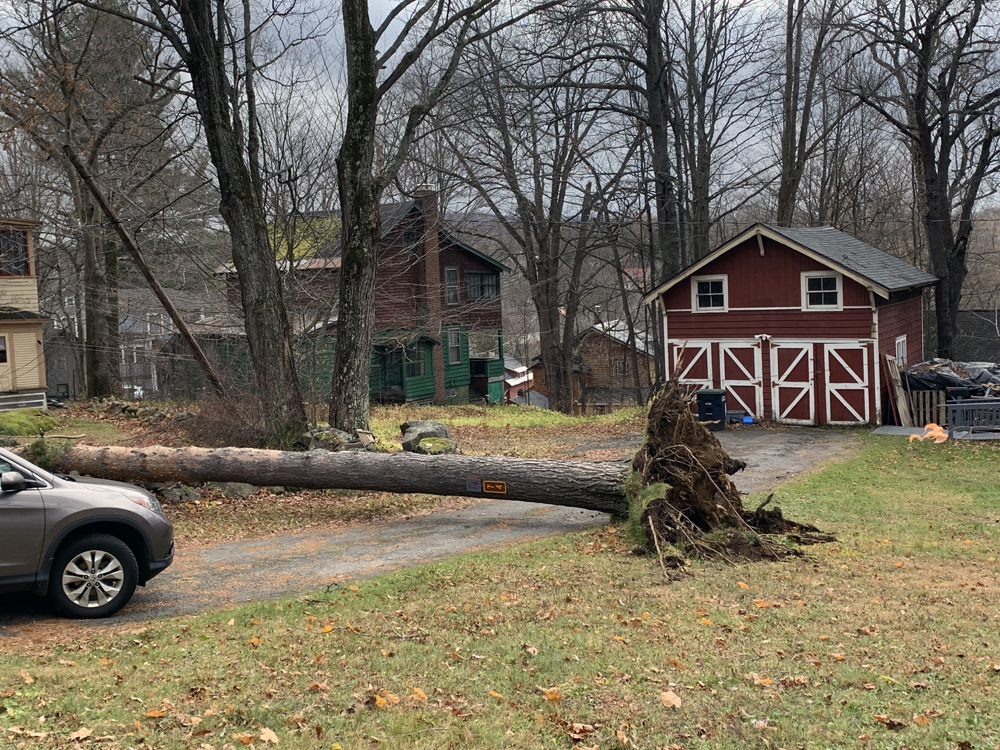