APA board gets look at new rail-trail plans 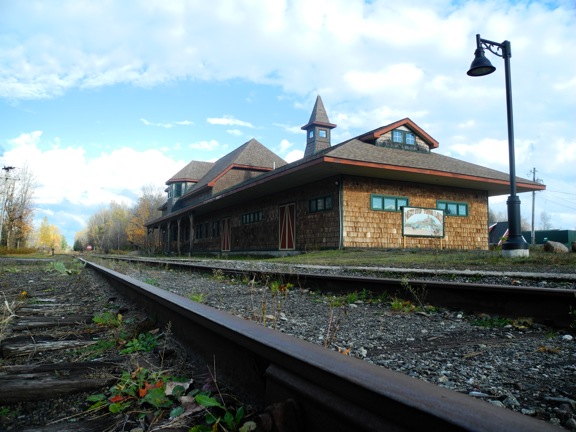 RAY BROOK — The state Adirondack Park Agency board on Thursday heard a presentation on a new plan connecting trains with trails, from Remsen to Lake Placid.

Last December the APA changed the State Land Master Plan’s definition of a “travel corridor” to more clearly allow for the removal of tracks on 34 miles of the state-owned Remsen-Lake Placid Travel Corridor. That removal is part of the state plan announced Tuesday by the state departments of Environmental Conservation and Transportation.

The rail-trail project has a long history with many twists and turns. DEC Natural Resource Planner John Schmid, who gave the presentation about it, showed two pictures of himself. In one he is a clean-shaven lad with dirty blonde hair, looking like a member of the Beach Boys. In the next, he is a haggard-looking man, sporting the bald head and long beard he has now, looking, as he said, “like a Viking berserker.”

He jokingly said the project made him pull out all his hair. In fact, he later admitted the first photo was from 1985, not five years ago, when he started working on this project.

The alternative the state ended up proposing several years ago, and still stands by, features an 85-mile railroad Remsen to Tupper Lake, with 45 rehabilitated miles between Big Moose and Tupper Lake. This state-owned railroad continues south to Utica on privately owned rails. On the north end, will be a 34-mile multi-use recreational trail from Tupper Lake to Lake Placid. The DOT would run the railroad section and the DEC the trail.

The plan proposes extending the train line from the Old Forge area to Tupper Lake, with trains running from May to November, with snowmobiling and cross-country skiing from December to April. The trail connecting Tupper Lake and Lake Placid would be available for biking, hiking and cross-country skiing, as well as snowmobiling and class 1 e-bikes. Class 1 e-bikes have a drive system that is activated by pedaling. They can get up to 20 miles per hour and are allowed anywhere other bikes are allowed.

Currently, trains can run from Utica to Big Moose, though they more often stop in Thendara near Old Forge. The UMP calls for the removed railroad material between Tupper Lake and Lake Placid to be used to help rehab the southern line.

Since the Tupper Lake-to-Lake Placid corridor is listed in the State and National Registers of Historic Places as the New York Central Railroad, Adirondack Division Historic District, removing infrastructure like rails and ties is considered an adverse impact to the historic resource. To comply with the Historic Preservation Act, the DEC and DOT will work with the state Office of Parks, Recreation and Historic Preservation to develop measures to mitigate those impacts.

The DEC and DOT have already determined that the changes in land use under consideration have potential for significant environmental impacts and completed their scoping of a Supplemental Environmental Impact Statement Oct. 23.

In Tupper Lake there are significant improvements planned to be made to the rail station and Junction area.

A 550-foot raised passenger platform will sit between the lines. Passing tracks will be added, as will lots of parking, with spaces for snowmobile trailers. The trail running next to the tracks entering town will join up with the town and village trails.

An emergency route detour will be added, crossing the tracks and connecting Washington Street to McCarthy Street to the east of the train station and state Route 3.

“An interesting fact that came to light is that if Route 3 is ever blocked here, it would take over 117 miles, I think, to go around,” Schmid said.

Local governments and nonprofit recreational groups will be sought for assistance in creating, patrolling and maintaining the trail segment connecting Tupper Lake and Lake Placid.

After the public comment period and a letter of resolution from OPRHP, DEC, DOT and APA, the APA will conduct a conformance review and comment period before releasing a final UMP amendment.

The DEC will take written public comments until Dec. 20