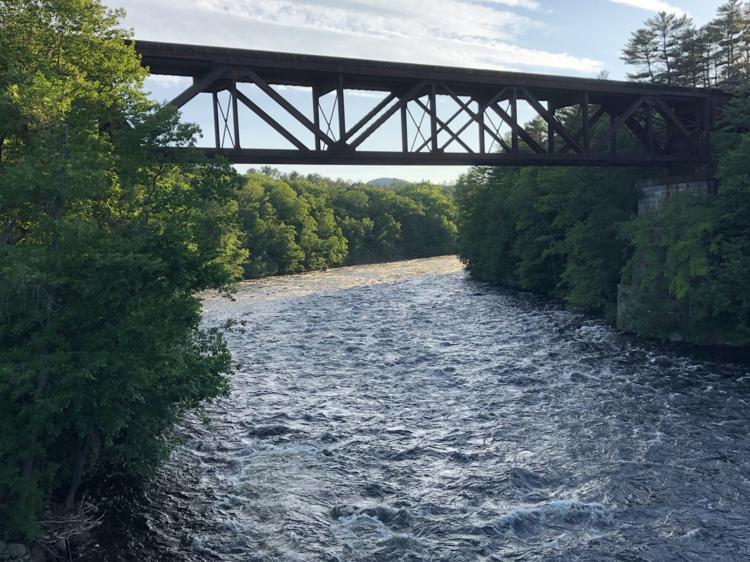 A rail bridge over the Sacandaga River in Hadley would become part of a recreational trail between Hadley and North Creek if Warren County continues forward with a plan to “abandon” the rail line. (Provided photo — Don Lehman, The Post-Star)

Warren County supervisors took the first step toward turning the county rail line into a recreational trail by voting Monday to start an “abandonment” process for the line.

In the wake of the only suitor for a lease on the line backing out of negotiations last month, the county board’s Public Works Committee decided that the county’s best move is to ask the federal government to deem the rail line “abandoned” so that other uses could be explored.

“It gives us freedom to decide to do what we think is best,” said county Administrator Ryan Moore. “I think a trail makes the most sense at this point.”

It would also allow the county to not have to spend as much to maintain the rails going forward.

Abandonment, which would have to be approved by the U.S. Surface Transportation Board, gives the county options to proceed with uses for the 40 miles of rail corridor between Hadley and North Creek, other than freight trains. Passenger trains could be an option, though two passenger/excursion train operators have failed over the past decade.

Conversion of the line to a recreational trail would be the preferred use going forward, said Bolton Supervisor Ronald Conover, chairman of the county Board of Supervisors.

“It sends a clear message to all parties in terms of where we are and where we are heading,” Conover said. “Could you imagine a trail from Saratoga to the heart of the Adirondacks? I don’t think there would be anything like it in the state of New York.”

He said a conversation about the future of the line needs to take place with the state of New York, which is seeking the abandonment of the stretch of rails north of Warren County’s line, from North Creek to the hamlet of Tahawus in Essex County.

That part of the line is owned by Saratoga & North Creek Railway, which walked away from a local train operation last year and has joined with the state in a request to abandon its portion of the line.

The 11-member Public Works Committee voted 9-2 in favor of starting the abandonment process.

The two supervisors who voted against the move, Warrensburg Supervisor Kevin Geraghty and Lake Luzerne Supervisor Gene Merlino, said they believed county leaders should meet with their counterparts that own stretches of rails to the north and south before plotting a course of action. That includes Essex and Hamilton counties and the town of Corinth.

Conover said such a meeting would be organized going forward. Corinth, though, is still negotiating with a potential train operator for its portion of the line, between Saratoga Springs and Corinth.

The committee’s decision drew praise from supervisors who have believed that county leaders did all they could to see if trains were still economically viable on the line, as well as a county resident who has advocated for a trail for a decade.

Glens Falls 3rd Ward Supervisor Claudia Braymer, who has been advocating for trail use for two years, said she was “really glad to see we are finally moving forward with planning for alternatives for the railroad corridor.”

Curt Austin, a Chester resident who has pushed for conversion of the rails to a trail since 2009, said creating a 90-mile trail from Saratoga Springs to Tahawus would result in a “world-class” destination. He said the county could make money by selling the steel rails and salvaging railroad ties.

Warren County Public Works Superintendent Kevin Hajos, though, said that the ties are considered potentially hazardous, and an analysis by the county showed it would likely lose millions of dollars in taking up the rails. The cheapest solution is probably to pave over them, he added.

The full county Board of Supervisors will discuss the potential rail abandonment at its next regular meeting on Dec. 20.