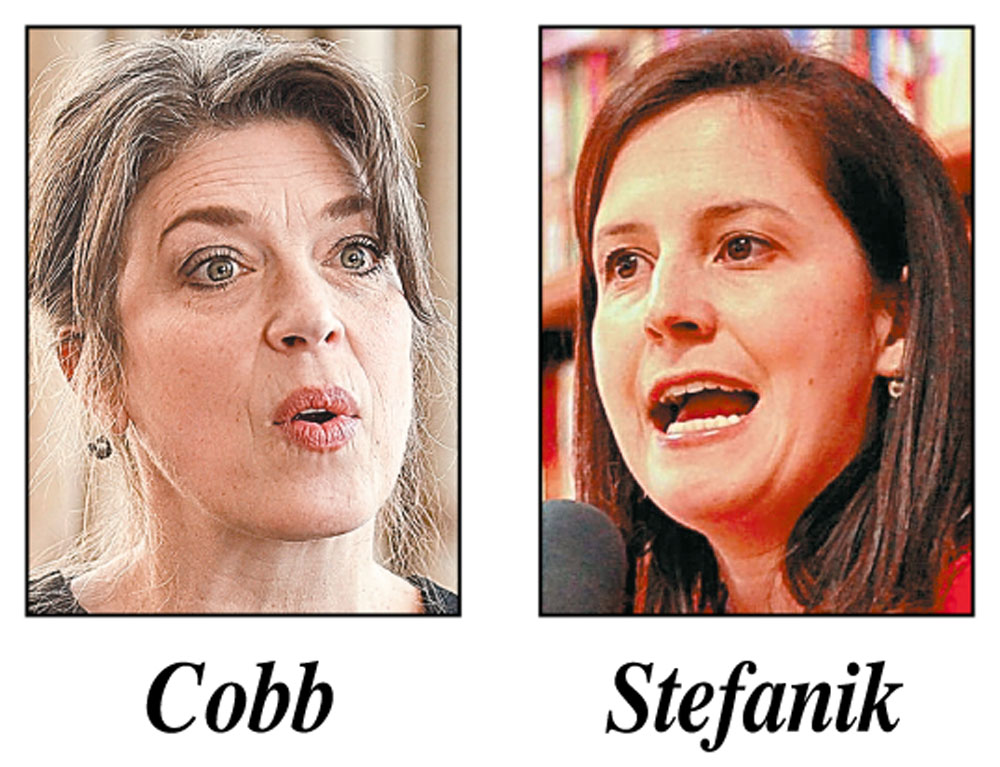 Nationwide fundraising drives are dumping millions of dollars into the campaigns of Rep. Elise Stefanik and her Democratic challenger Tedra Cobb in their 2020 race in northern New York.

On Thursday night Stefanik appeared on Sean Hannity’s Fox News show to talk about the impeachment inquiry hearings into President Donald Trump’s dealings with Ukraine. She also promoted her campaign and raised half a million dollars in two hours that evening alone, according to her campaign.

The next morning on “Fox and Friends,” Trump gave her a shout-out and again called her a “star.”

But later Friday afternoon, the hashtag #ByeByeElise began to trend on Twitter, reaching No. 1 in the U.S. and No. 2 worldwide — the second social media push in a week to promote the campaign of Cobb, who previously had been little-known nationally.

A statement from the Cobb campaign said the campaign has raised over $1 million from more than 60,000 individuals in all 50 states since last Friday, with an average donation of under $25.

By Monday, she had already gathered more money than she had in total in the 2018 election.

It is still unclear how either campaign plans to spend the large influx of cash. Cobb, on a campaign tour this week, was largely silent on how she will use her newfound funds. She told the Watertown Daily Times she has “barely taken a breath” to consider what to spend it on.

Alcivar did not respond to an Enterprise email requesting the updated numbers by press time.

Stefanik was a hot topic for national news outlets last Friday, spurred by her active involvement with the impeachment inquiry hearings in the House Intelligence Committee. Now, a week later, she has received multiple compliments from the president for defending him in the hearings, including him calling her a “star” on “Fox and Friends” Friday morning.

Her fundraising page, fightschiff.com — named for Rep. Adam Schiff, D-Calif., chair of the Intelligence Committee — raised $500,000 in two hours Thursday night after she plugged the link on Hannity, according to Stefanik.

Democrats, vexed by Stefanik’s efforts to work against impeaching Trump last week, vented their frustrations by donating $1 million to Cobb over the course of three days. The hashtag #TrashyStefanik trended on Twitter, driven to popularity by George Conway, the husband of Trump’s advisor Kellyanne Conway. One of the witnesses before the Intelligence Committee Thursday even expressed sympathy for Stefanik being abused on Twitter.

The hashtag #ByeByeElise was trending even higher Friday.

The hashtag had been used before by Democrats seeking out oust the sitting congresswoman, but it appears to have been rocketed into the wider Twitter consciousness by “The Ellen Show” Executive Producer Andy Lassner.

Lassner reacted to a Cobb tweet slightly before noon Friday, saying, “It seems to me that we can all do two things here. 1. Donate anything we can afford to @TedraCobb today. 2. Get the hashtag #ByeByeElise to trend.”

As the hashtag gained traction, even trending No. 3 in Canada, tens of thousands of posts used the phrase, some touting donations to Cobb, some insulting Stefanik and some completely unrelated to politics. There were many gifs of K-pop stars dancing, people promoting their own political projects, and confused “Sonic the Hedgehog” fans worried something happened to Princess Elise, a character in the video game.

Trump was on “Fox and Friends” Friday morning, and during his meandering, hour-long phone call with the show’s three hosts, he talked about Stefanik’s involvement in the hearings.

Co-host Ainsley Earhardt said Stefanik was “raked over the coals” for sticking up for Trump. She brought up Conway’s “trashy” tweet.

Trump said Reps. Jim Jordan, R-Ohio, and Mark Meadows, R-N.C., “have been stars” but that Stefanik is a new one.

“I know a lot about stardom. I know a lot about it. I’ve made plenty of them,” Trump said. “But I’ll tell you what: This young woman from upstate New York, she has become a star. Her way, you know, you can never define exactly what it is.

Trump said Stefanik has become a star for “her mannerism, her way of talking.”

Trump said Stefanik is “a tremendous person” and “fantastic during the hearings.”

He said all the witnesses are “shifty-Schiffs” and then said he would like to be put on trial.

“I think I can have it to be whatever I want,” Trump said.

Cobb recently received $50,000 and an endorsement from members of the MoveOn political action committee. Cobb has pledged to not take corporate PAC money. MoveOn is a policy PAC, but the money didn’t come directly from it — it set up a fundraising page for its members to donate to Cobb’s campaign.

MoveOn released an ad titled “Defend” Friday, criticizing Stefanik and saying it his her “duty” to impeach Trump because she took an oath to defend the Constitution.

“But when President Trump bribed a foreign country to interfere in our elections for his benefit, putting our elections and national security at risk, Stefanik chose to defend Trump rather than our democracy,” the ad says.

Stefanik’s campaign also released an ad titled “Tedra Cobb = Toast of Tinseltown” on Thursday. It lists off a “cast of Hollywood’s leading liberals” who saw Conway’s “tasteless tweet” and pulled out their “black card” to donate.

“Taxin’ Tedra, the toast of Tinseltown, is back and more out of touch with the North Country than ever,” a voice says as images of Cobb on the El Capitan Theatre marquee flash below.

The ad’s tone shifts as electric guitars signal the arrival of the North Country and Stefanik talks to a group of supporters at a farm. The voice says Stefanik is “doing what she’s always done” by giving farmers, veterans, students, small businesses and families a voice in Washington.

The ad says the show of support for Cobb by well-known actors and personalities is “just showbiz.”