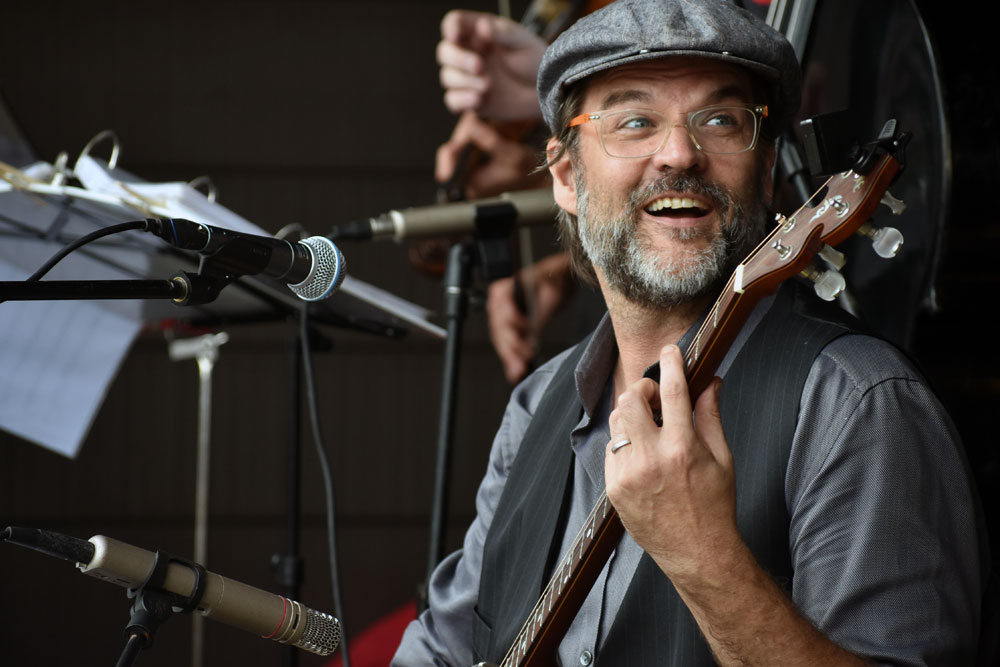 SARANAC LAKE — Before a show, bands tend to practice. Mark Hofschneider didn’t want to do that.

“I’ve written some themes and chord changes and some structure,” he said. “We haven’t gotten together yet, which is why it’s an experiment.”

“A lot of people miss that around here,” he said.

Trip-hop started in Bristol, England, in the early 1990s. It takes influence and elements from all types of music such as the drums and bass of hip-hop, the improvisation of jazz and the melancholy tones and lyrics from post-punk and grunge. However, the trip-hop sound is much less aggressive than its influences. It tends to sound more ambient and dream-like.

“I knew I wanted to play this type of music and haven’t been able to yet since 1994, the first time I heard the Portishead ‘Dummy’ album,” he said. “I came home from work one day and my roommate had it on, and within about five seconds of listening to it — it was like nothing else I ever heard. That was during the grunge scene, and we were being inundated by continual, loud, obnoxious guitars and yelling for lyrics. (Portishead) had a beautiful sounding singer, a great timbre. It was moody. It was dark. It was like the grunge, but a lot more accessible to me. I knew I wanted to do something like it eventually.

“I finally got around to it 25 years later.”

Hofschneider said the sound he’s going for with this experiment is based on “Dummy,” which turned 25 in August, but he and his band mates will play original music. He said one of the twists that will make the performance interesting is Simon on tabla.

“The second I heard Alan, I thought, ‘I’ve got to do something with this guy,'” Hofschneider said. “Cornershop had a sitar on one of their albums, so I think that kind of influenced getting a tabla in there. Instead of having a drum kit and percussion like trip-hop would normally have, we have an Indian-style tabla player.

“One of the pieces is inspired by the minimalist classical movement like Steve Reich and Philip Glass,” he added. “I brought that into the mix because it’s always been a style that has fascinated me.”

Many people in the area might know Hofschneider as the founder and guitar, ukulele and banjo player of the local swing jazz group Crackin’ Foxy.

“This is very different from the music I’m used to playing,” he said. “With Crackin’ Foxy everything is very concise, there’s a very structured form, and a lot happens in a little time. This is more of an experience where it builds. You do one little line; then somebody riffs off of that. It’s slowly developing and evolving into something else.”

Hoschneider said it can be difficult to find a variety of live music genres in the North Country, and that’s why he appreciates what music booker Peter Seward does at Lake Flower Landing.

“There are some people around here playing punk rock or they’re on the fringes, but it’s mostly very folk-oriented,” Hofschneider said. “When I first moved up here, I really missed hearing jazz music, so that’s how Crackin’ Foxy came to be. Peter is great at bringing in new, great sounds to the area.”

Seward formerly managed Hobofest, the end-of-summer free music festival in Saranac Lake that after he left it transformed into the Northern Current festival this year.