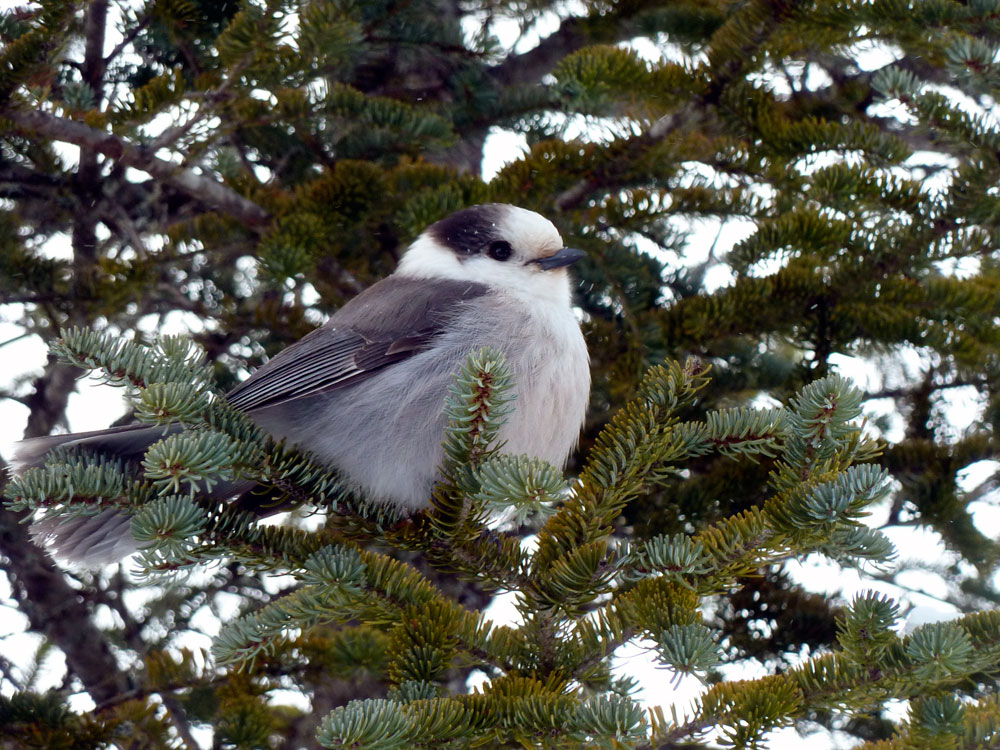 A Canada jay (aka gray jay) perches in a tree alongside the Bloomingdale Bog Trail. Gray jays prefer boreal forests, such as in Canada and parts of the Adirondacks. (Enterprise photo — Peter Crowley)

The authors examined avian community changes in lowland boreal habitats and the impacts that temperature and precipitation have on long-term occupancy patterns of boreal birds. Both peer-reviewed papers were recently published in the scientific journal PLoS One.

Lowland boreal habitats are characterized by conifer swamps, open peatlands and river corridors. It is a relatively rare habitat type at the southern extent of its range in this part of the state and is particularly vulnerable to climate change.

“The Adirondack boreal is an important breeding ground for large numbers of birds including boreal specialists such as boreal chickadee and Canada jay,” said Michale Glennon, director of science for PSC AWI, and the lead author of the research.

Previous work by the authors found that the largest and most intact open peatlands in the Adirondacks are most likely to be occupied by boreal species.

“Large intact boreal forests such as Bloomingdale Bog, Spring Pond Bog, and Massawepie Mire are more likely to support these rare birds,” said Steve Langdon, director of the SSPRS, and one of the authors. “They are connected to nearby boreal habitats, and they are generally characterized by low human impact.”

“We were surprised to find that several birds were more likely to occupy sites that were warmer and drier on average during the breeding season,” Glennon said. “Boreal habitats in general are not warm and dry. However, the largest boreal habitat complexes, where birds tend to do well, happen to be located in a corner of the park with relatively low levels of precipitation and where temperatures are relatively higher than the surrounding forested uplands.”

The second study focused on all bird species inhabiting low elevation boreal habitats and examined which types of species are declining and which are increasing over time. Researchers found that the group of birds being lost most prominently from these habitats are those specialists uniquely adapted to live in boreal habitat, which include olive-sided flycatcher and rusty blackbird. Birds on the increase in these same habitats were more general forest birds such as the pileated woodpecker, and those more adapted to human activity like the American redstart.

The authors discuss recommendations for how best to protect boreal habitats in their paper including creating undisturbed buffers around sensitive areas and restricting timber harvests to winter months.