The St. Armand town line on Forest Hill Avenue near the Baker Mountain trailhead is seen Tuesday morning. Behind the sign is the town, and in front of it is the village of Saranac Lake. (Enterprise photo — Griffin Kelly) 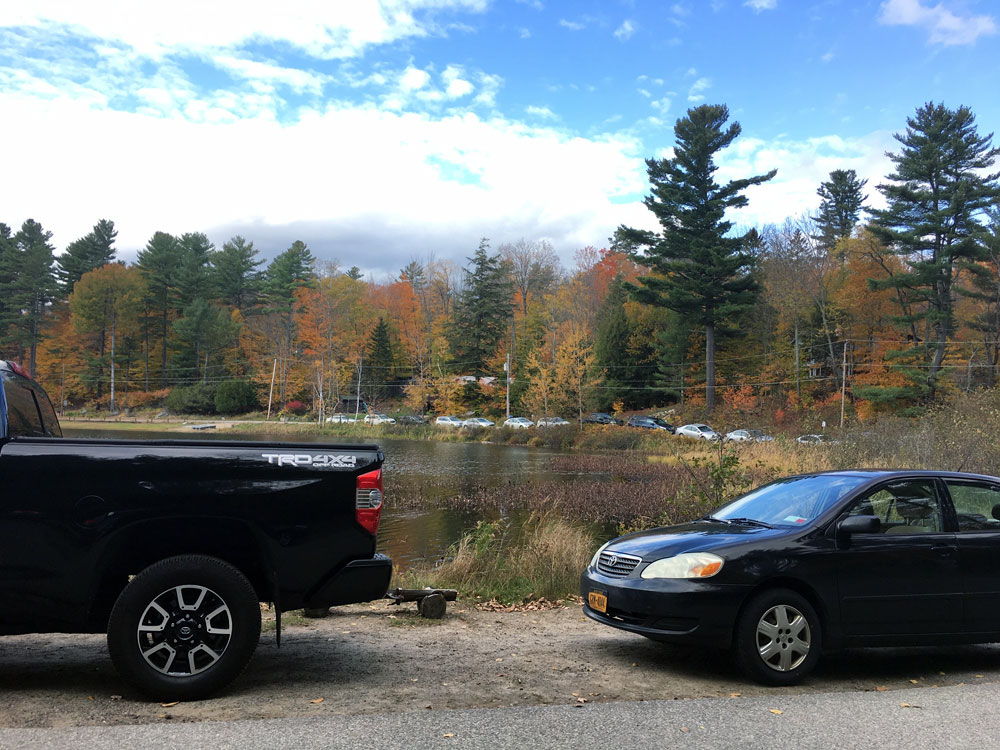 SARANAC LAKE — Despite Baker Mountain being so closely associated with Saranac Lake, it’s actually outside the village in St. Armand, and that town’s supervisor said parking in that area has been a problem for a long time.

“It’s been an ongoing issue for many years, and we need to come up with an alternative,” St. Armand town Supervisor Davina Winemiller said at the Saranac Lake Village Board of Trustees meeting Monday. “My concern is a kid on a bike is going to get hit when someone’s pulling out and can’t see.”

“The town line there is a little bit convoluted,” she said in a phone interview Tuesday. “In the spring we want to locate the hard and fast St. Armand town line and mark it. We’ll then take some steps to prevent folks from parking there and increase signage.”

The portion of Forest Hill Avenue in question is in St. Armand, but the community lines can be confusing since they’re at a point where St. Armand, Saranac Lake and the town of North Elba all meet. 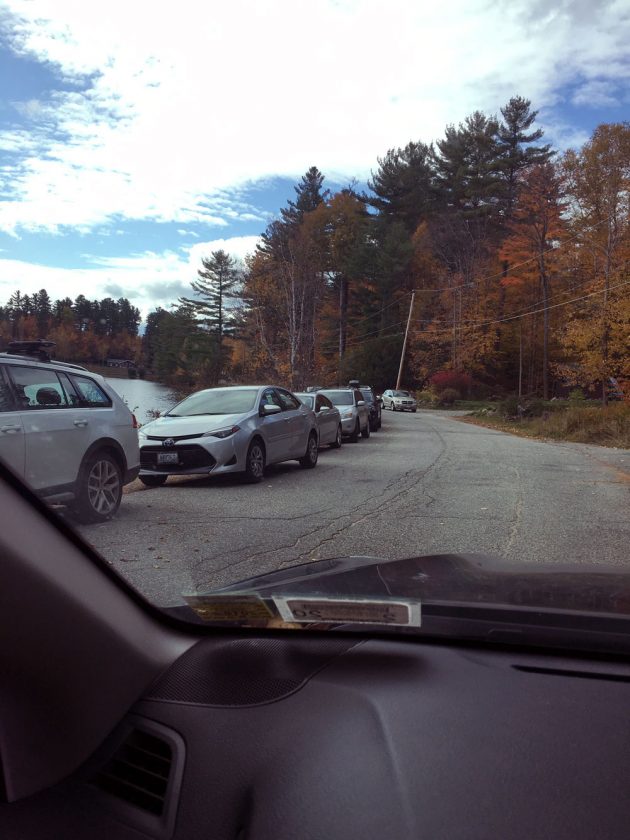 Baker Mountain is one of the more popular hikes in the Adirondacks because it’s quick, is close to the downtown of Saranac Lake and offers a good view of the village and Moody Pond at the summit. Like most Adirondack hikes, it is steep, but it’s often seen as a starter trail because it’s just short of a mile from the trailhead to the top.

It can be tough to find parking at the Baker trailhead, especially in the summer when a line of cars wraps around Moody Pond. Winemiller provided photos to the Enterprise that show more than 20 cars parked along the St. Armand section of Forest Hill Avenue.

Saranac Lake’s tourism website, saranaclake.com, had previously advised hikers trying to get to the Baker trailhead to drive on Forest Hill Avenue and “park on the right shoulder of the road (closest to the pond), and please be respectful of the nearby property owners.”

Winemiller requested that text be deleted from the website and suggested having people park more toward the village center and walk to the trailhead.

“If you’re going out for a hike, it’s not a big deal to walk a little more,” she said. 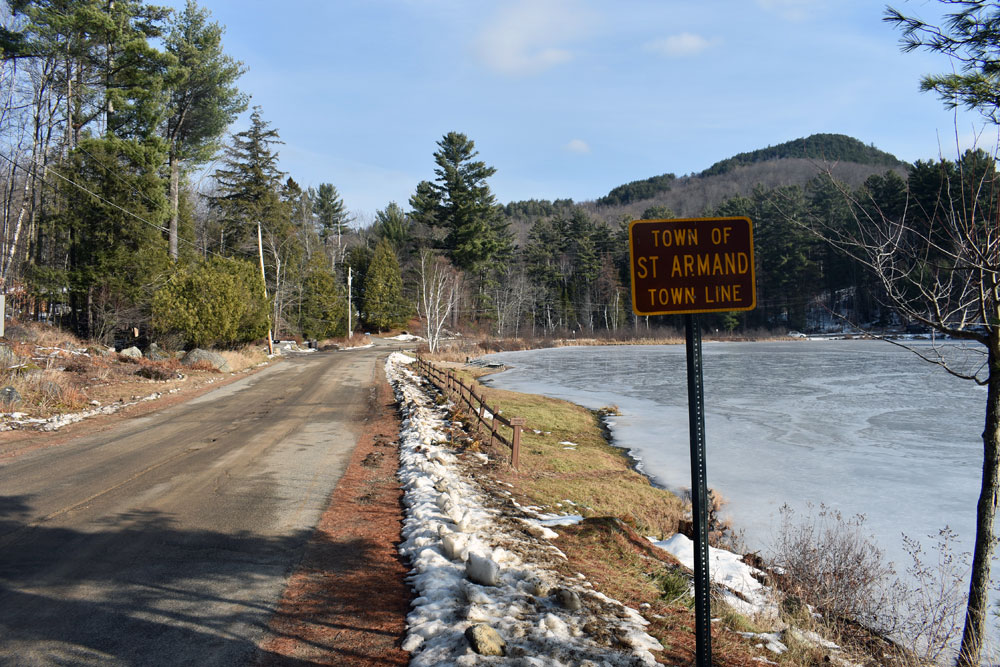 The St. Armand town line on Forest Hill Avenue near the Baker Mountain trailhead is seen Tuesday morning. Behind the sign is the town, and in front of it is the village of Saranac Lake. (Enterprise photo — Griffin Kelly)

Village Trustee Melinda Little, who said she walks around Moody Pond daily, said drivers in that area are often respectful of the walkers. Little said she liked Winemiller’s idea of changing the website’s content to curb parking issues, but she couldn’t imagine people parking closer to the village center and walking to Baker.

“I do understand there can be an overabundance of cars, and it can be very annoying for residents on the pond. I would urge people to be respectful.”

“There are parking areas on that side of the pond that can fit about 10 or 12 cars,” he said, “but it is in St. Armand, and we do respect the sovereignty of the land.”

Now the website says, “Please plan ahead as parking is limited. Consider parking downtown and walking or biking the short .5 mile distance to the trailhead.”

The other side of the road already has no-parking signs in place. Little said she’s seen people park on that side of the street on only a few occasions.

“It’s rare,” she said. “I’d never say never, but I rarely see people parking on that side.”

Shamim Allen and Craig Bailey live right next to the trailhead, and they said parking can be a major issue in that area.

The two said they don’t see the overabundance of parking as a safety issue, but Allen does worry about the local wildlife.

“That’s where turtles lay their eggs, and that’s where people park,” she said.

Rabideau led the village in starting the Saranac Lake 6er in 2013. It’s a hiking challenge modeled after the 46er, where outdoor enthusiasts climb all 46 High Peaks in the Adirondacks. The 6er contains six mountains: Scarface, Ampersand, McKenzie, St. Regis, Haystack and Baker, none of which are in the village. It’s a promotional activity with the goal of bringing more people to these mountains and Saranac Lake.

“Mount Baker has always been very popular,” Rabideau said. “I don’t think the 6er is the biggest contributor to people going there.”

“We absolutely saw an increase,” she said. “I think when the 6er first started, we didn’t realize how much it would affect parking in that area. We’re not against the 6er program. It’s great to get people outside and moving and enjoying the Adirondacks. We want to see people visiting Saranac Lake. I’m just concerned about the safety of walkers, bikers, homeowners and visitors in that area.”

Allen and Bailey agree with Winemiller.

“There’s a correlation between the 6er starting and the overuse of that trail,” Bailey said.

Winemiller said she’s spoken with village Manager John Sweeney about the parking issues and that she’s looking forward to working with Rabideau and Saranac Lake on finding a solution.

“Parking and hiking in the Adirondacks is becoming a hot-button topic, and St. Armand is no different.”