Part of the Saranac Lake River Walk was closed in October for repairs. Village Mayor Clyde Rabideau said it will stay that way through the winter. (Enterprise photo — Griffin Kelly) 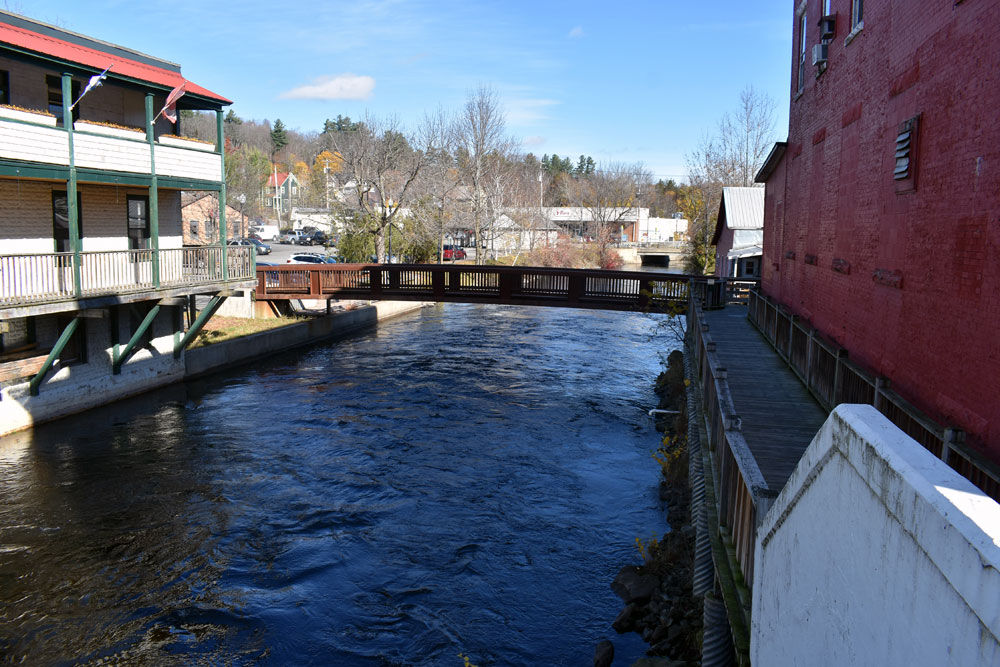 SARANAC LAKE — People really would prefer for the River Walk to go along the river.

That was the consensus at the informational meeting Thursday night at the Saranac Lake Public Library, where more than 20 people showed up to give their opinion on the design of the River Walk going forward.

The comment period is open until Friday, Nov. 15. People can either pick up a comment card at the village offices or submit a comment via email to comdev@saranaclakeny.gov. Comment cards and informational graphics are also available at saranaclakeny.gov under the “Projects” section.

The River Walk starts behind the village police department at 1 Main St. and goes along the river to the Dorsey Street parking lot. It then picks up again at the Broadway Bridge and concludes at the Tops supermarket parking lot on Church Street.

At the meeting, the village showcased three design ideas from consulting firm Barton & Loguidice (B&L) that would connect the Dorsey Street parking lot section of the River Walk to the Broadway Bridge section. 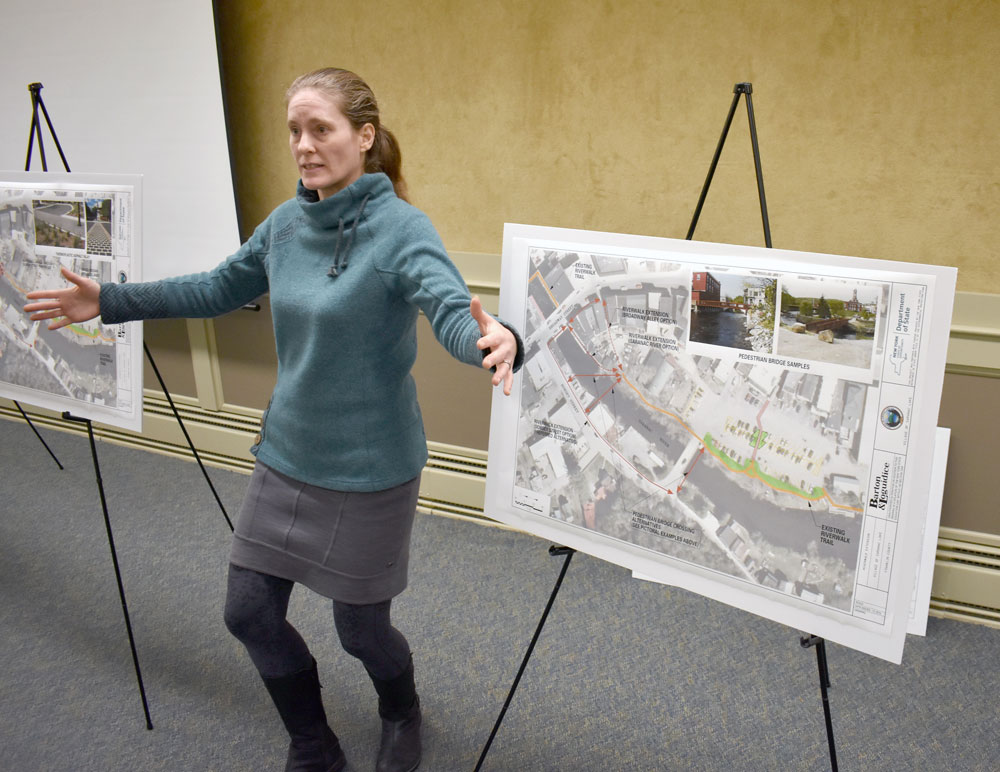 Alternative 1 would have the River Walk extend from the Dorsey Street parking lot along the river and the side of the former Dew Drop Inn. This plan would require negotiations with private property owners and creating village easements. B&L also said the River Walk could risk flooding in this section.

However, this is the most popular idea, village Community Development Director Jamie Konkoski said. The village Board of Trustees also liked this idea when it was presented at a recent board meeting. 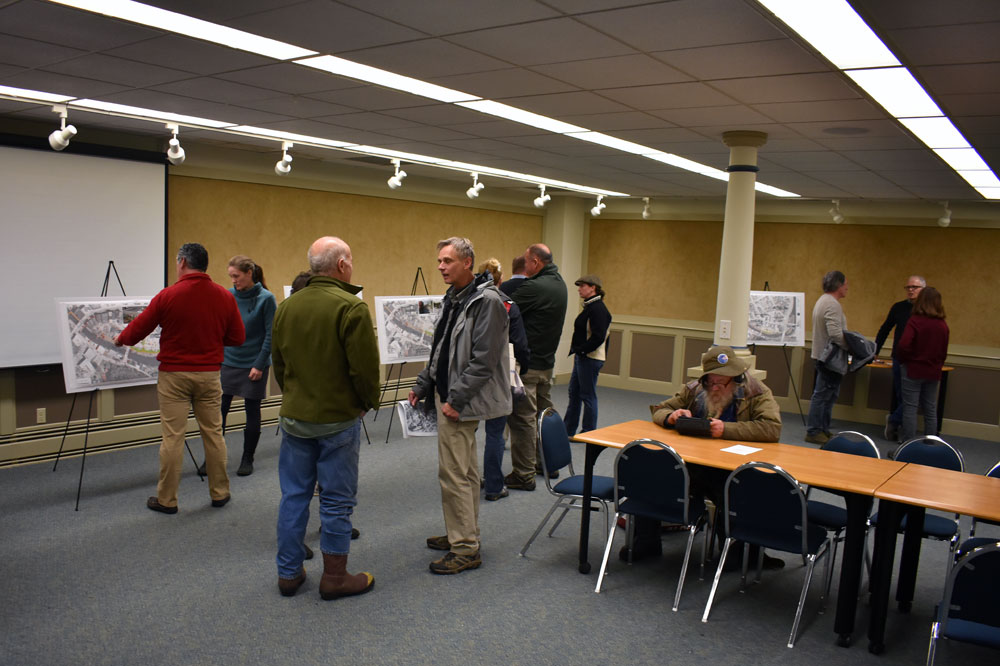 “If that is what people want, I think the board is willing to take that time and figure out a way to make it work,” she said.

B&L didn’t provide an estimated cost for this option because there was no initial, feasible design plan. 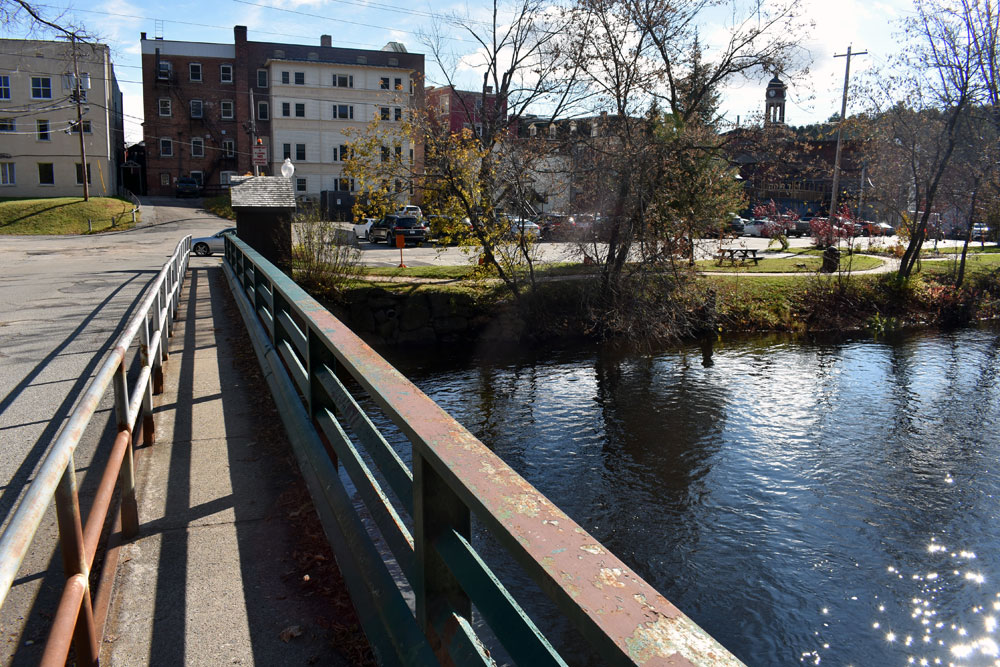 Alternative 2 would build a pedestrian bridge next to the Dorsey Street bridge and have people walk on an enhanced Dorsey Street sidewalk until they get to Broadway. Because Dorsey Street is already narrow, this idea has the potential to turn Dorsey Street into a one-way road past a certain point.

Konkoski said she didn’t hear anyone at the meeting who was in favor of this idea.

Another part of this design would have seen a footbridge connect from where the trail ends at the Dorsey Street parking lot to the St. Regis Canoe Outfitters boat launch across the river. However, St. Regis Owner Dave Cilley said that idea probably won’t happen and that a new bridge wouldn’t add anything special to the walk.

“I don’t think anyone last night had any interest in that,” he said Friday. “I would like to see it go along the river, not the street. I think it’d be a mistake to have it connect here. It would be great to see someone buy and develop the Dew Drop Inn. They could remove the part of the building that hangs over the river and make that the River Walk, put some benches, and arches and plants over there. It would look great.” 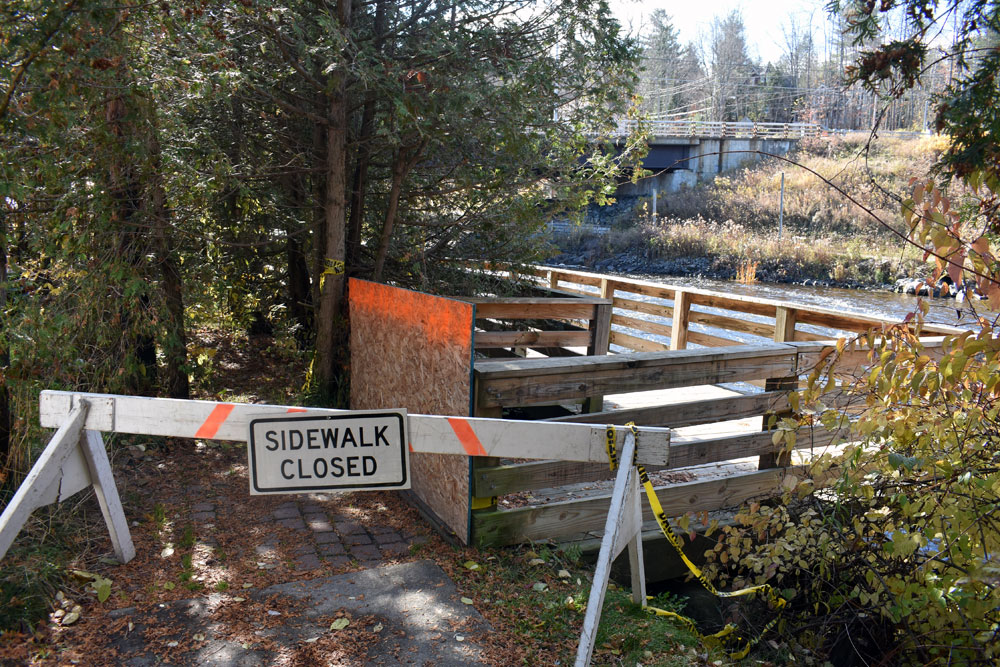 Part of the Saranac Lake River Walk was closed in October for repairs. Village Mayor Clyde Rabideau said it will stay that way through the winter. (Enterprise photo — Griffin Kelly)

Alternative 3 would keep the River Walk on the side of the Dorsey Street parking lot and extend the path through an alleyway between the Adirondack Center for Loon Conservation and the empty storefront next door. However, this would also require some negotiations with private property owners and regrading on the pavement.

Konkoski said this seemed to be the second-most popular design idea.

Real estate entrepreneur Wayne Zukin, who owns the Loon Conservation building, said even if that design idea would take people along local businesses, he’d prefer to see the River Walk stay along the water.

The money to complete the design of this connector section of the River Walk comes from a state Department of State Local Waterfront Revitalization Program grant, which expires in March 2020, so a decision on the design would have to be made relatively soon. However, Konkoski said the Board of Trustees does have the option to not choose any design at this time, let the grant go and plan an option more in line with the public’s interest — staying on the river and going along the side of the Dew Drop Inn.

“I think that’s the direction the village is going in,” Cilley said. “It may take another five years, but that’s not too long in the grand scheme of things.”

People also got a chance to view what type of amenities could be added to the River Walk such as benches, bike racks, garbage cans and informational signage.

Anne Sterling, who’s managed the Left Bank Cafe on Broadway for the past 10 years, said she likes the idea of signage or brochures that would provide information on direction, local businesses and the history of Saranac Lake.

“I’ll often have people coming from the Tops parking lot stopping in at the cafe, and they go, ‘Was that the whole walk?'” she said. “And then I have to direct them around the block to where it picks up again. It gets confusing at that break section.”

She said she’d also like to see flowers planted along the walkway.

Randall Swanson, a professor in the Forestry department at Paul Smith’s College, said he enjoys the River Walk, but before the village starts building additions and extensions, he’d like to see a River Walk maintenance commission in place.

“I was recently down in Manhattan on the High Line, and all along the walk, you see maintenance people pick up garbage and tending to the plants. It’s really the model for what a public walk should be,” he said. “These types of things can be very attractive, but they need upkeep and a dedicated group to maintain the River Walk.”

Recently, Swanson brought a crew of Paul Smith’s students to the section of River Walk between the Left Bank Cafe and Church Street to clear and trim trees as part of the school’s day of volunteerism. It’s a big operation that involves climbing trees with chainsaws and plenty of safety equipment and practices.

Konkoski said the village Department of Public Works mows and weed-whacks along the River Walk, but doesn’t do the type of work Swanson and his students do.

“I love the River Walk, and I think there are a lot of advantages to having it,” Swanson said, “but I like to think practical about it.”

In early September, Bruce Darring and his wife Katie Stiles blocked off the section of the River Walk that runs through their property at 3 Broadway. They and their lawyer have submitted letters to the village in the past explaining some grievances.

“(The village does) have a right-of-way there, so we could open it back up,” village Mayor Clyde Rabideau said in a previous interview, “but we want to do the right thing and work with them on the issues they’ve raised.”

In a Guest Commentary published in the Enterprise in October, Stiles suggested having the River Walk go around the front of her building and out the alleyway between Blue Line Sports and the Cape Air office, which would leave pedestrians on Broadway facing the Berkeley Green. She said it would increase foot traffic to businesses along Broadway, whereas keeping the walk on the river bypasses businesses.

Another part of the River Walk, behind the Harrietstown Town Hall at 39 Main St., has been closed off and will need renovations for severe rusting and section loss of metal fasteners and joist hangers.

“It’s been 20 years, so even though the metal is galvanized, they’ll still rust out,” Rabideau said.

“We will get to the boardwalk, but it’ll probably be closed all winter because we also need to get (state Department of Economic Conservation) permits,” he added.

Another construction aspect of the River Walk is having it extend from the Tops parking lot to Woodruff Street. Konkoski said that would be a project for a later date. That portion would be paid for in part by the state Downtown Revitalization Initiative grant money Saranac Lake was awarded last year.