Pining for the Pontiac

Mayor gets Saranac Lakers talking again about having their own cinema, but it’s hard to say if one could make it

Firefighters use aerial ladder trucks to spray water on the burning Pontiac Theatre’s roof in December 1978, as seen from the roof of the Hotel Saranac. This fire destroyed the Saranac Lake cinema, and in 1981 another fire would destroy the Berkeley Hotel, seen in the foreground at left. (Enterprise file photo)

Pontiac Theatre seats are exposed to the icy elements in December 1978, shortly after a fire fatally damaged the cinema and before it was torn down. (Enterprise file photo)

To help the World War II effort, the Pontiac Theatre in Saranac Lake hosts a rubber recycling drive, letting children in free for a special matinee showing of “Anne of Windy Poplars” if they bring a used tire. The stacks of tires show the drive’s success. At right are Bill Kollecker and Pontiac manager Tony Anderson. (Enterprise file photo) 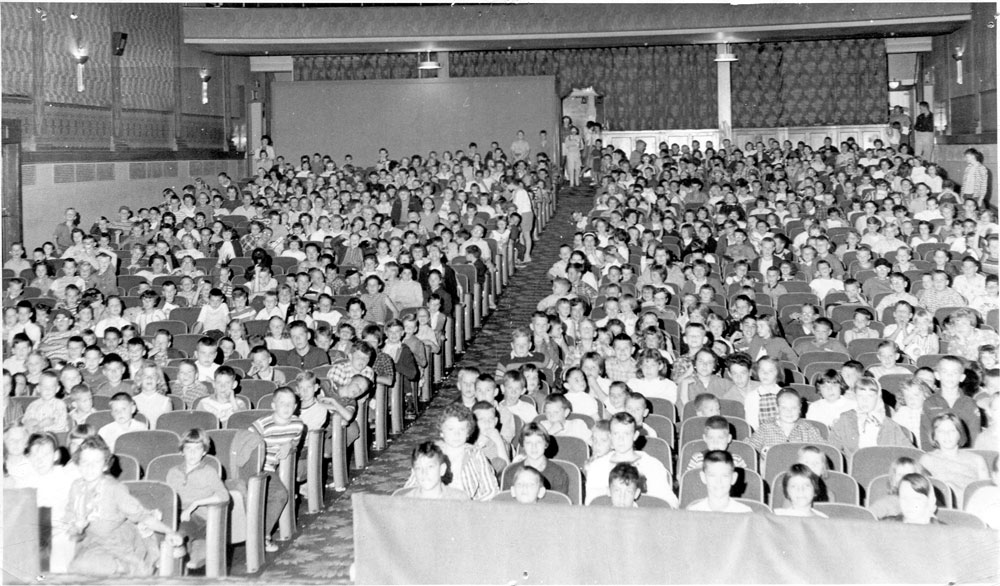 SARANAC LAKE — Village Mayor Clyde Rabideau knows the idea of having a movie theater here has been long-standing, but the thought reignited recently when his wife took their granddaughter to see “Frozen 2” at the Adirondack State Theater in Tupper Lake.

It had garnered nearly 150 comments as of Wednesday.

“I would say the reaction was 99.99% positive,” he said. “Some people took a tangent and brought up a drive-in theater, which doesn’t make sense when summers up here last two-and-a-half months. But I’d say the feedback was positive and hopeful.” 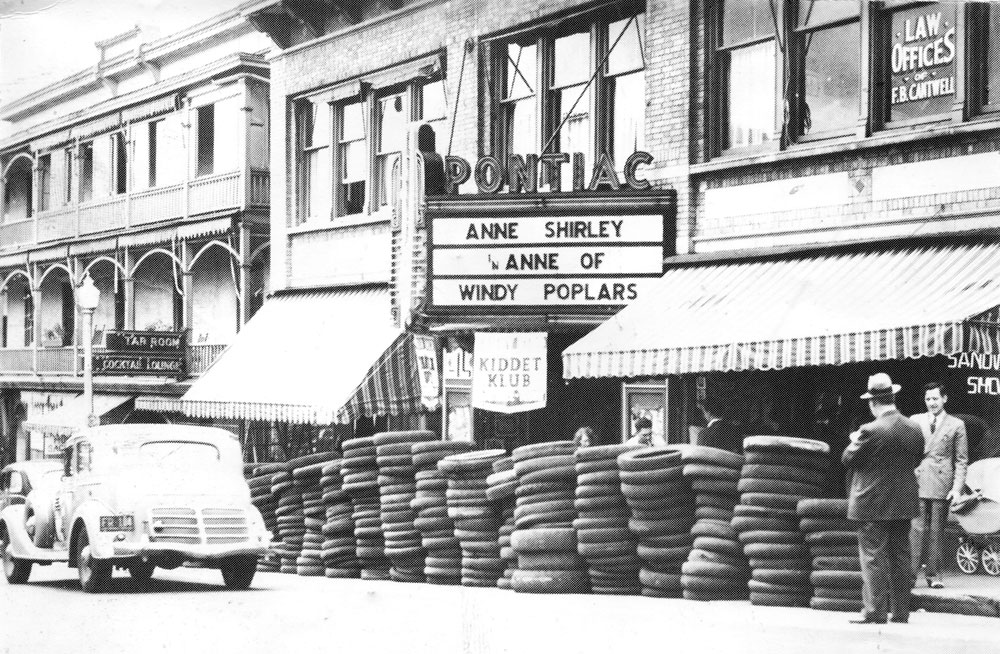 To help the World War II effort, the Pontiac Theatre in Saranac Lake hosts a rubber recycling drive, letting children in free for a special matinee showing of “Anne of Windy Poplars” if they bring a used tire. The stacks of tires show the drive’s success. At right are Bill Kollecker and Pontiac manager Tony Anderson. (Enterprise file photo)

“It’s a potential,” he said. “I’m not saying they’re going to do it, but it’s an idea we’re working with at the moment.

“These are all traffic generators for a downtown, and would be aiming toward that goal.”

This village offers a plethora of art and entertainment experiences. There are concerts most weeks of the year at the Waterhole, BluSeed Studios offers classes on painting and pottery, Pendragon Theatre has been putting on plays for decades, and NorthWind Fine Arts and the Adirondack Artists Guild galleries are only two blocks from each other.

One medium Saranac Lake is missing is cinema. Lake Placid and Tupper Lake have the Palace Theatre and the State, respectively, which leaves Saranac Lake as the sole Tri-Lakes community movie theater-less.

In response to Rabideau’s Facebook post, Jess Collier wrote, “I would go at least once a week if there was a movie theatre in Saranac Lake. As it is now, I’m lucky if I make it over to Placid or elsewhere to see a movie once every three months.” 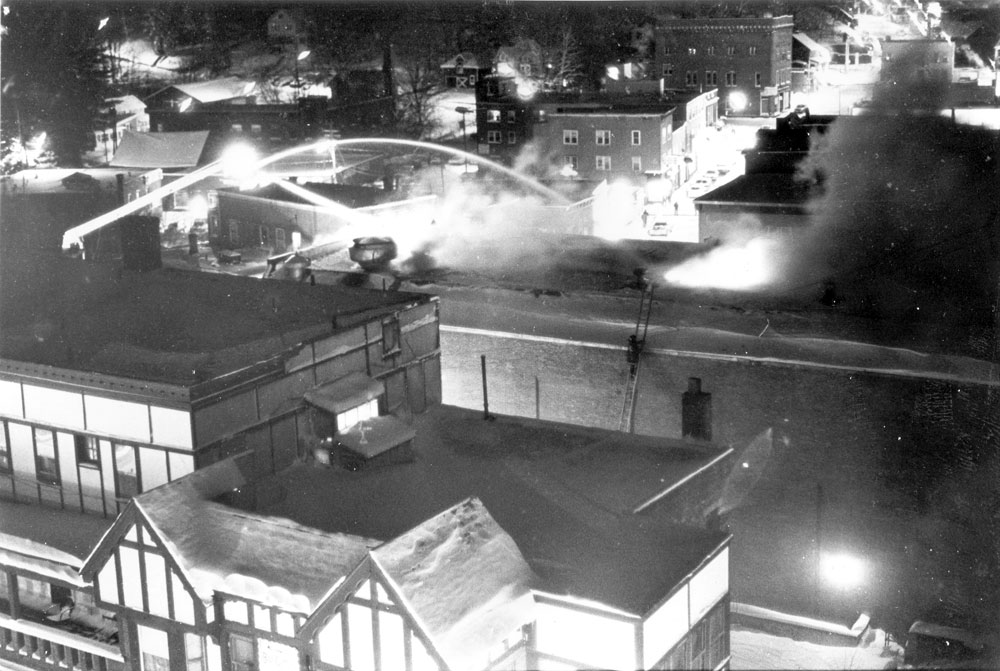 Firefighters use aerial ladder trucks to spray water on the burning Pontiac Theatre’s roof in December 1978, as seen from the roof of the Hotel Saranac. This fire destroyed the Saranac Lake cinema, and in 1981 another fire would destroy the Berkeley Hotel, seen in the foreground at left. (Enterprise file photo)

Birgit Schulte of Lake Placid wrote, “I really believe a Movie Theater would be welcomed by everyone in this town!!”

Not everyone was enthusiastic about the idea, though.

London Piro Jones wrote, “It’s not going to work. I think there are more important things in Saranac Lake that need improvement.”

Kathy Sauers wrote, “Movies are big business and small one screen theaters are proven unsustainable nowadays. The movie distributors call all the shots. The theaters in Lake Placid, Tupper Lake, etc., are privately owned and labors of love hence the affordable ticket and concession prices. There is no profit for those enterprises, even with the tourist crowds in Lake Placid.”

It’s no secret that movie theaters and ticket sales have been on a steady decline since the internet and streaming became popular. Even big-name movies such as “Avengers: Endgame,” the highest grossing movie of all time with $2.796 billion, haven’t kept theater stock prices from dropping. Why pay for a ticket when you can stream loads of movies your home? Because of that, Rabideau suggested packaging the theater with a restaurant and bar. 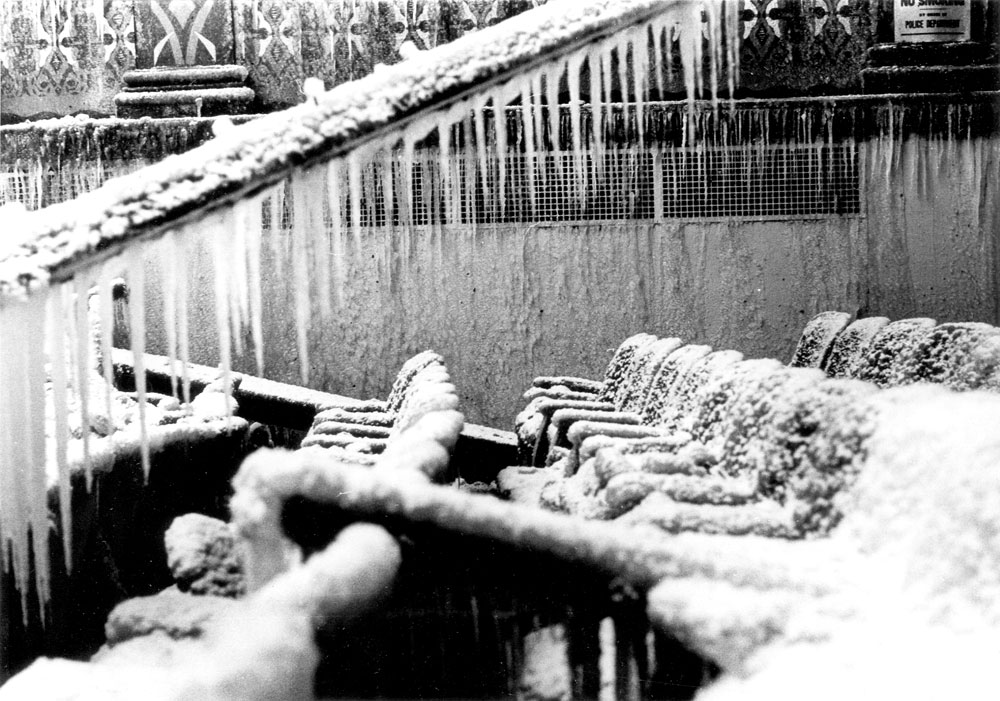 Pontiac Theatre seats are exposed to the icy elements in December 1978, shortly after a fire fatally damaged the cinema and before it was torn down. (Enterprise file photo)

“We have to balance what people want with reality,” he said, “and the reality is it’s difficult to sustain a movie theater in today’s market. If we could make it part of another project, that might be doable. I’ve been reaching out to places I know of in Maine for information. There’s the Mag Lantern theater and pub in Bridgton and Smitty’s Cinema, which is a one-screen operation with a family restaurant and arcade attached. Their motto is ‘movies, meals and more.’ Maybe something like that could work in Saranac Lake.

“If it’s too much of a bar, I don’t think it would be attractive for kids and grandchildren, so we have to be careful with that.”

A movie theater in Saranac Lake does raise the question of competition with the Palace and the State, family-owned and locally appreciated theaters. The Palace is about 10 miles from Saranac Lake, the State about 20.

“For most people in Saranac Lake, I think they would choose to go to the Palace,” Rabideau said. “I think we’d benefit from a niche operation, and it wouldn’t be stand-alone. We’d have to link it to other attractions, and maybe make it a boutique, offer older films or limited releases on top of the new stuff.”

Barbara and Heather Clark, members of the family that own and run the Palace Theatre, said they don’t have much to say on the prospects of a Saranac Lake cinema. Sally Strasser, who owns the State Theater, couldn’t be reached for comment before publication.

Peter Wilson of Lake Clear runs the Facebook page Cinema Saranac Lake, and he’s been trying to get a movie theater in Saranac Lake for years. He said Rabideau’s post sparked his interest in the project once more.

“It really lit a fire under me to bring folk up to date on the project,” he said. “It’s nice to see that the mayor supports the idea.”

Wilson previously owned Major Plowshares Army & Navy Surplus on Broadway. He closed the shop in 2015, in part to pursue his dream of getting a movie theater in the village.

“I was seeing a lot of people, young people especially, without a whole lot to do in the afternoons and evenings,” he said. “In the winter, the skatepark is closed, and it might not be so easy for young people to get to Lake Placid for a movie. A theater was the first thing that jumped to mind.”

Wilson said his vision of local theater would be different from the Palace and the State.

“I think it needs to be more reflective of Saranac Lake’s eclectic style,” he said. “In my view, it would show some first-run movies and hopefully a lot more films that aren’t jumping into the Palace or the multiplex in Plattsburgh — indie films and classic. I think it’s great to expose people to great movies you can’t see in theaters anymore. It’s a whole different feel when you’re in a theater with 100 people than watching a movie at home. They feed off of one another with laughter or tears or whatever.”

Wilson said an attached bar and restaurant may be tough to maintain, but he likes the idea of a cafe for tea, coffee and desserts where movie goers can congregate before or after films.

Even if he’s not attached to the project, Wilson said he’d still like to see a theater in Saranac Lake.

“It would be a good building block for a lot of things in Saranac Lake,” he said. “I was never territorial with the project.”

Saranac Lake did have a movie theater for quite a long time. In fact, there were two in the village’s life span. First there was the Pontiac Theatre, which was built in 1917 on Broadway in what is now a parking lot next to Berkeley Green. It also hosted Vaudeville shows and at one point St. Bernard’s Masses as the Catholic church rebuilt from a 1968 fire. At one time it boasted the largest screen in northern New York, and it hosted the world premiere of “The Silver Chalice” in 1954.

Local history columnist Howard Riley said he remembers the Pontiac being one of the most popular places in town.

“The old theater was ­absolutely beautiful,” he said. “Because of all people in town and all the (tuberculosis) patients, you hardly ever went to a show without the theater being full.

“And because it was also a double feature and a newsreel and cartoon, you’d be in there for three-and-a-half hours. On a Saturday afternoon you’d almost be blinded by the time you come out, you were in there so long.”

Back when Riley was a kid, movie tickets cost 11 cents. The penny was the tax.

“I never did this, but sometimes you might have one kid pay for a ticket and then he would go over to the fire exit and open the door just a crack so only a little bit of light was getting through, and before you know it, you had four or five extra kids in the theater. Again, I never did that.”

After switching owners multiple times, the Pontiac burned down in December 1978. It took firefighters about six hours to control the blaze and then three days to fully put it out. About 20 million gallons of water were used to douse the flames. It still isn’t clear exactly how the fire started, but then-Fire Chief John Bombard figured the electrical wiring ignited and that arson was not the cause.

In a somewhat ironic circumstance, the Chevy Chase and Goldie Hawn film “Foul Play” was screening that week, and next week Cheech and Chong’s “Up in Smoke” was set to open.

“We were all shocked,” Riley said. “It was the cultural and social center in town, and it was gone.”

In 1988, Reg Clark, who owned the Palace and died last year, opened the Berkeley Theater next to Berkeley Green where Bear Essentials is now. He closed it down 12 years later in 2000, when Lorenzo Cecunjanin bought the building and was asking Clark to pay $1,000 a month for rent. The Davis family, which had owned the building previously, had not charged Clark rent. Clark took the screen, projector and seats to the Palace, where he established a fourth screening room in the back.