No butts about it

New tobacco law means you have to be 21 to buy 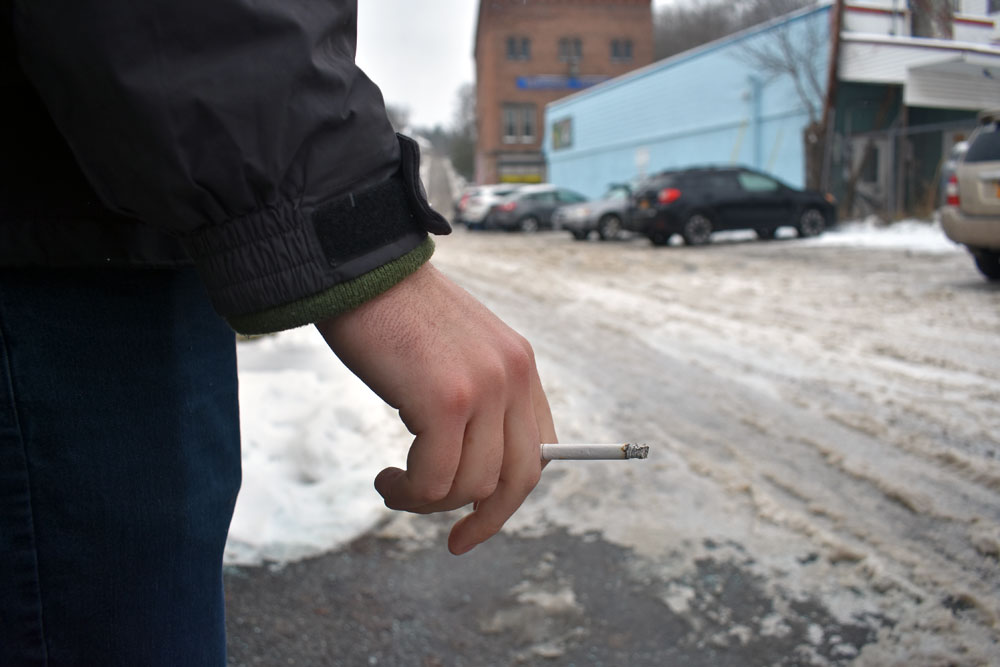 New York’s legislation to raise the age to purchase tobacco products from 18 to 21 began Wednesday. The products include traditional cigarettes, vaporizers and many others. (Enterprise photo — Griffin Kelly)

New York raised the age to purchase tobacco products from 18 to 21 earlier this week.

Local governments, health and education officials and some retailers support the new legislation.

Gov. Andrew Cuomo said this change was partly motivated by the uptick in underage kids vaping e-cigarettes. He signed the legislation in July, and the law went into effect Wednesday.

“The goal of this law is simple — to prevent cigarettes and vaping products from getting into the hands of our youth, creating an addiction to a deadly habit,” he said in a statement. “We are taking aggressive action to make sure the decades of progress we’ve made to combat tobacco addiction is not undone by a sharp rise in e-cigarette use among younger New Yorkers.”

The law to purchase does not change the age of tobacco consumption, which New York doesn’t have.

Cuomo also announced that State Police will continue partnering with the state Department of Health to conduct undercover investigations under the Adolescent Tobacco Use Prevention Act, which enlists underage youth to attempt to buy tobacco and e-cigarette products.

Traditional products like cigarettes, cigars and cigarillos contain ingredients such as tobacco, nicotine, arsenic and tar. When they’re lit, nearly 7,000 more chemicals are released, and about 70 are known to cause cancer.

E-cigarettes and other liquid vaporizers don’t contain tobacco and sometimes little to no nicotine. The two main ingredients are propylene glycol, which is commonly used to remove ice from airplanes, and glycerine, which can be found in hair gels and lubricants. There are also added flavorings that can create tastes like cherry, vanilla, cotton candy and peanut butter cup.

Common vaporizer brands include SMOK Fit, Limitless Pulse and one of the most popular on the market, Juul. These refillable products range in price from $15 to about $50.

There are also vaporizers for THC and CBD, the main chemicals in marijuana.

While vapes are generally marketed as a way to quit traditional smoking, many health groups think they are just a new vehicle for smoking.

As of Nov. 5, 39 deaths have been attributed to vaping-related illnesses, according to the Centers for Disease Control and Prevention. Some of the deaths have been associated with black market THC vapes, containing vitamin E acetate, a chemical commonly found in skin creams. In October, a 17-year-old boy from the Bronx was the first New York resident to die because of vaping-related illnesses.

Stewart’s Shops are one of the more popular chain retailers for cigarettes and other tobacco products in the North Country. Stewart’s spokesperson Erica Komoroske said the business fully supports the new legislation.

“At Stewart’s Shops, our policy has always been to ID anyone that appears to be under the age of 30 to purchase tobacco products,” she said in an email. “With this new law in effect, we will continue to ID anyone that appears to be under 30 and all of our partners have received proper training to only sell tobacco products to individuals 21 and older. We support this legislation and do not anticipate a big difference in tobacco sales; we will continue to be a responsible tobacco retailer.”

Kenny Wright manages Higher Peaks Glassworks in Saranac Lake, a shop that sells mainly glass pipes and a few vaporizers. He said he thinks the new law is just another way for the state to restrict people.

“I think it infringes upon freedoms,” he said. “You’re old enough to vote and fight in a war, but you can’t buy a pack of cigarettes.”

“Tobacco remains the leading cause of preventable disease and death. Essex County was on the leading front of changing smoking habits for its constituents,” she said.

Despite vaping seeming like a catalyst for the new state law, Beers said raising the age has been a priority for counties across New York for more than a decade.

“Vaping has certainly created traction, but when we were moving Tobacco 21, vaping was just coming out,” she said.

Beers said the next step is to continue awareness, education and public health programs on the dangers of smoking and vaping.

“Back in the day, I don’t think anyone had any idea of the consequences of tobacco,” she said. “And now vaping is said to be safe when it’s not. Getting that message out there and stopping another generation from smoking is imperative.”

North Country Healthy Heart Network Executive Director Anne Morgan said by increasing the age to 21 it helps cut off kids in high school who would’ve gotten tobacco from an older sibling or friend who just graduated.

“How many high school kids have connections with people 21 or older?” she said. “There’s a separation there.”

Morgan said the next step to preventing nicotine addictions and removing flavored vapes from the market. She also said continuing and expanding treatment is important for those already addicted to nicotine.

“There’s the New York Smokers’ Quitline where people can get coaching over the phone, and people can always talk to their health providers about nicotine replacement therapy,” she said.

In Essex County, the Board of Supervisors already raised the age to purchase tobacco products to 21 in summer 2018. Essex County was the first county in the North Country to do this.

“The problem with trying to enforce the law at the county level is kids can just go over the county line or into Vermont to purchase tobacco,” he said. “There’s also no law for consumption, so if an underage person buys cigarettes or vaporizers from Vermont, they can still smoke it here, and we can’t stop it. I think it does curb the 18 to 20-year-olds who would buy tobacco for younger kids.”

Gillilland said it seems like the counties are leading the way on important issues as opposed to the state.

“The next thing we’re going to look at is vaping issues. It’s quickly becoming the new combustible tobacco. We had a presentation at the county board and learned a lot of alarming information — 40% of high school seniors across the country vape. It feels like vapes are reversing all the gains that have been made to reduce smoking made in the last 30 or 40 years.”

Across the Tri-Lakes, schools agree with the legislation and hope it curbs the number of students who use tobacco products.

“The introduction of Juuls and other vapes created new and unexpected issues that have been increasing at an alarming rate for schools all over,” he said.

“For example, we had one gas station in town that was selling e-cigarettes at a reasonable price,” she said. “Someone of age would go in and buy 50 and then resell them. With the new legislation, you might have 18 or 19-year-olds still getting access to tobacco products, but hopefully, it’s not reaching the 14 and 15-year-olds.”

Catania said the students who vape do it because they’re thought to be less harmful, they come in various flavors and they’re easy to hide.

“The whole idea of smoking in the bathroom doesn’t exist anymore,” he said. “With a cigarette, they can be easily stopped because you can tell by the smell and the smoke, but vaping is harder to notice. It’s remarkable how vaping has changed access to nicotine and how kids have gotten attracted to it in a way they weren’t with cigarettes.”

Clark added that she’ll have to sometimes tell parents that vapes don’t look like cigarettes.

“We once had a student who told their mother the vape was a USB for a computer because that’s what a Juul looks like,” she said. “I had to tell her, ‘No, it’s actually a vaporizer,'”

In Lake Placid, Clark said all the seventh-grade students participate in an informational program on the dangers of smoking called “Catch My Breath,” and students who are caught with tobacco products are required to take the online VapeEducate course.

“It’s a six-hour program and afterward I sit down and review the work with the students,” Clark said. “They learn that we don’t really know what’s actually in vapes and how it can affect their lungs. It’s making a difference.”

Tupper Lake Central School District Superintendent Seth McGowan said he hopes the new law will curb smoking and vaping among teens. He said vaping seems to have made people forget about all the negatives to smoking people have been inundated with over the past few decades.

“America has amnesia with this stuff,” he said. “Not that long ago the Surgeon General started putting warnings on cigarette packages. Vaping is this generation’s cigarettes, and I can’t imagine what’s going to come next.”

Saranac Lake Central School District Superintendent Diane Fox said Saranac Lake’s Board of Education has been supportive of local efforts to raise the legal age for tobacco product sales to 21.

“At its December 2018 meeting, the Board unanimously approved a resolution supporting a minimum legal sale age of 21 for tobacco products.” she wrote in an email. “Although traditional nicotine-delivery methods (cigarettes and chew) continue to be a concern in schools, vaping is far and away more prevalent.”