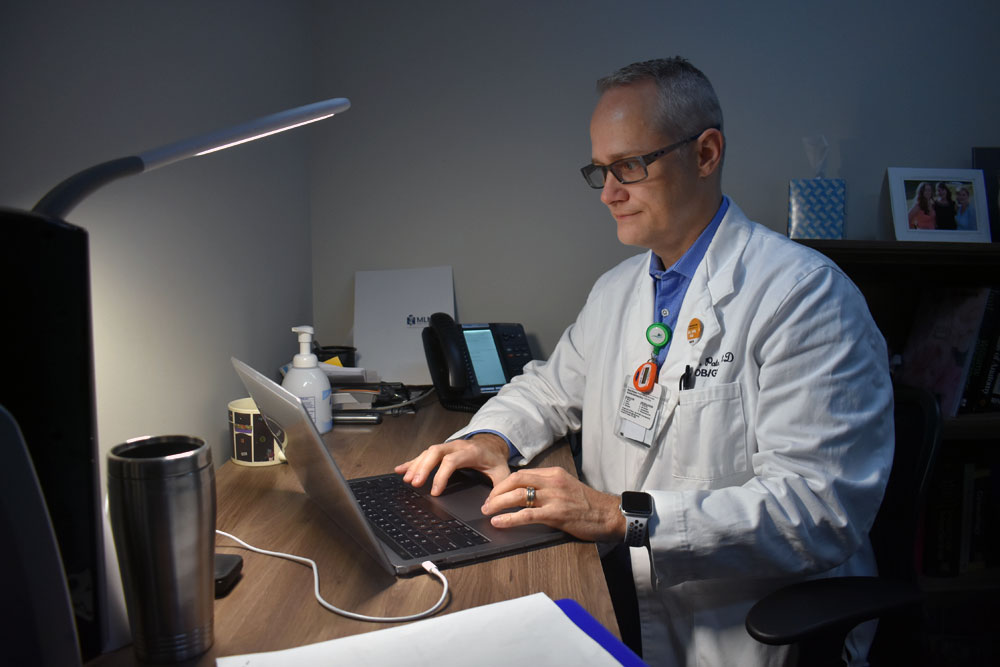 SARANAC LAKE — Dr. James Pate finds a great deal of importance in helping underserved groups such as women, people living in rural areas and those who subscribe to the LGBT communities.

“It feels absolutely wonderful,” he said. “I studied at Oregon Health and Science University, which has a strong focus on treating rural populations. That’s something I was looking for as a permanent physician, and one of the reasons that made this location so appealing.

“In regard to LGBT medicine, in general, it has traditionally been a very underserved population,” he continued. “Fortunately, the lesbian, and gay, and bisexual portion to that has changed to an extent so that discrimination in more educated areas of our country seems to be less. The transgender population is still underserved, though.”

Pate began working full time in August at the Adirondack Medical Center, where he works in the Women’s Health Center as an OB-GYN doctor.

“I do bread-and-butter obstetrics and gynecology, which include anything from well-woman exams to problem visits and delivering babies,” Pate said. “I also do surgeries from anything as simple as ovarian cysts to hysterectomies.”

On top of that, Pate provides hormone therapy and other medical treatment to transgender patients.

“It’s really quite fascinating. Medical interventions with transgender patients date all the way back to the late 1800s,” he said. “You may have seen the movie ‘The Danish Girl,’ which talks about one of the first cases of a transgender patient being treated by medical care. And then in the 1950s, the first public transgender patient was Christine Jorgensen. Dr. Harry Benjamin was one of the people who spearheaded standardizing medical care for transgender patients. His organization eventually became the World Professional Association of Transgender Health. It has a very long history that’s become more and more aware in a public forum because people are becoming more vocal about who they are and why they deserve equal rights.”

Pate said transgender care in the North Country used to be hard to come by but that it’s changing for the better.

“It has been relatively limited for a long time,” he said. “That is, fortunately, changing. I am not the only person at AMC capable of providing these services. There are other providers that are obtaining additional training to provide care for this underserved population.”

There is no easy way to address the systemic discrimination transgender people face, Pate said, but providing them with medical treatment will become more common as awareness is built.

“As more high-profile people come forward like Caitlin Jenner, making people aware of how common it is, I think that awareness is going to grow,” he said. “A lot of the major medical societies have put forth recommendations that all providers should be not only willing to provide care for transgender patients but also be able to be aware of their special needs. Getting doctors up to par with that requires additional education.”

Kelly Metzgar of Saranac Lake is the executive director of the Adirondack North Country Gender Alliance. She had her own difficulties when transitioning a few years ago.

“I decided in 2012 to start my transition, and it was impossible to find health care in the North Country,” she said.

Metzgar said she reached out to doctors all across northern New York, but none was willing to administer hormone therapy. Eventually, she started purchasing her hormones online.

“I did that for two years. I’m not proud of it,” she said. “I wouldn’t recommend it, but when a person is in that situation, they do whatever they can. That’s why I’m so happy we do have providers now.”

She cited other Tri-Lakes doctors who treat transgender people, such as Dr. Tracey Henderson and Dr. David Garrison, who also work with Adirondack Health.

Metzgar said the Tri-Lakes is a good area for transgender people seeking treatment. She added that other places in the North Country, such as Plattsburgh and Malone, need work.

“We’re in a better place than we were six months ago,” she said. “The Tri-Lakes is the only place where we can get health care, and that’s far better than having to go to Burlington or Albany or anywhere else.”

“There are only two counselors that I would personally recommend,” she said.

“We need doctors and counselors who are trained in transgender, non-binary, gender-fluid and intersect, and they need to work in tandem with the medical doctors.”