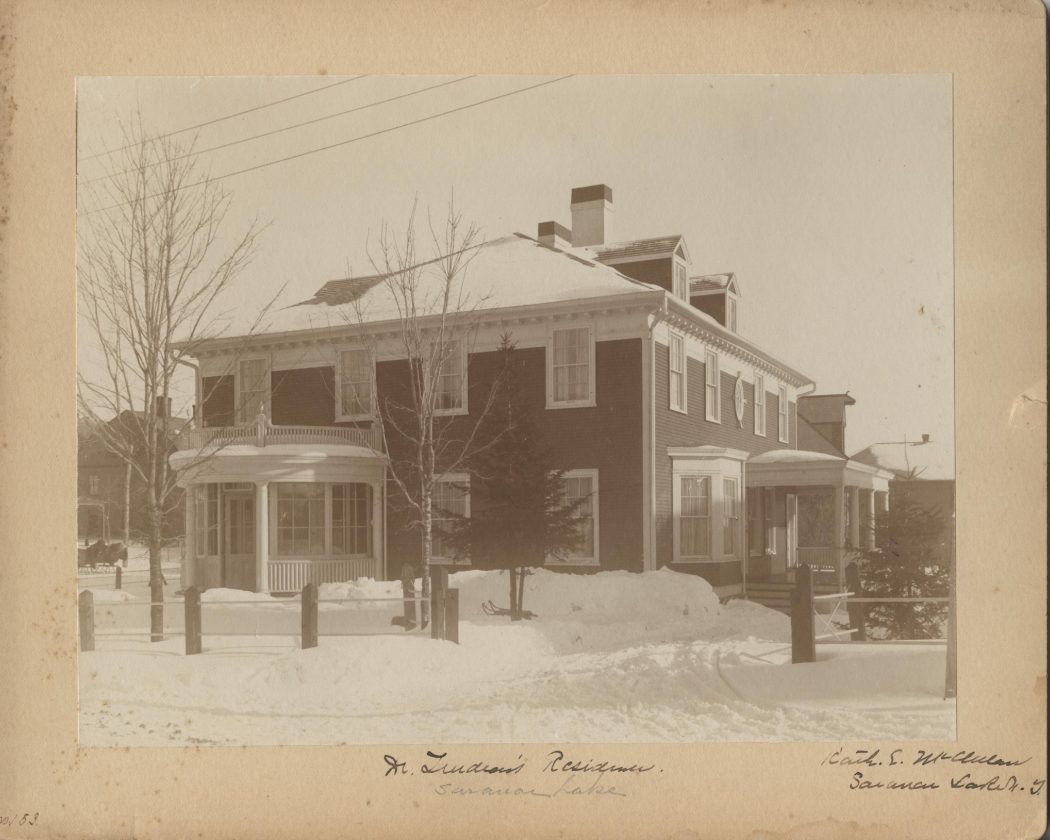 Dr. E.L. Trudeau’s home and medical office building is seen circa 1895. The front portico entrance and the cure porch on the right side will be restored. (Photo provided)

In late April, HSL purchased the “Trudeau Building” at 118 Main St. for expansion of its existing museum at the Saranac Laboratory next door. The newly acquired house at the corner of Main and Church streets is where tuberculosis curing pioneer Dr. Edward Livingston Trudeau lived and had his medical offices in the late 19th and early 20th centuries.

“Careful site plan design is important for this location because of its central location downtown, its historical importance, and the potential impact on the patterns of vehicle, bicycle and pedestrian circulation,” HSL Executive Director Amy Catania said in a press release. “The site plan will create a seamless visitor experience by integrating the two buildings and the various exhibit spaces.”

The $37,150 grant is one of many awarded to 27 communities and organizations throughout the Catskill and Adirondack parks. This round of funding included a focus on creating more livable communities for people of all ages.

The state has previously awarded this HSL project two other major grants:

¯ $500,000 from the Office of Parks, Recreation and Historic Preservation to help buy the Trudeau Building and rehabilitate its exterior.

¯ $325,000 from the Downtown Revitalization Initiative to help rehabilitate the building’s interior.

HSL has also secured about $400,000 in additional grants and private support, and fundraising continues. HSL anticipates a total project cost of $3.5 million, including buying and renovating the building, handicap accessibility, interactive museum exhibits and an endowment fund.

This summer, HSL contracted with museum planner Kate Cravens to create an overarching interpretive plan for both buildings.

“We have made major progress in planning for the museum expansion,” said board President Amy Jones. “The new space offers opportunities to not only tell the story of Trudeau and tuberculosis in Saranac Lake more in-depth, but also to present the broader rich history of the Saranac Lake region. For example, new exhibits will present stories from Paul Smiths, Bloomingdale and Saranac Inn, for example, and will explore the rich history of such topics as logging, wilderness guides, winter sports, and more.”

This winter, the architectural team is creating the integrated site plan as well as the detailed schematic design to submit for approval by the state Office of Parks, Recretion and Historic Preservation. Once plans are approved, building rehabilitation is to begin this coming summer.

“The community will be excited to see the building come back to its original grandeur,” said Catania. “We look forward to removing the vinyl siding and replacing it with wood clapboards in the original deep red color. The historic front portico entrance will be rebuilt. It’s going to be beautiful.”