It could be considered after millions spent on management 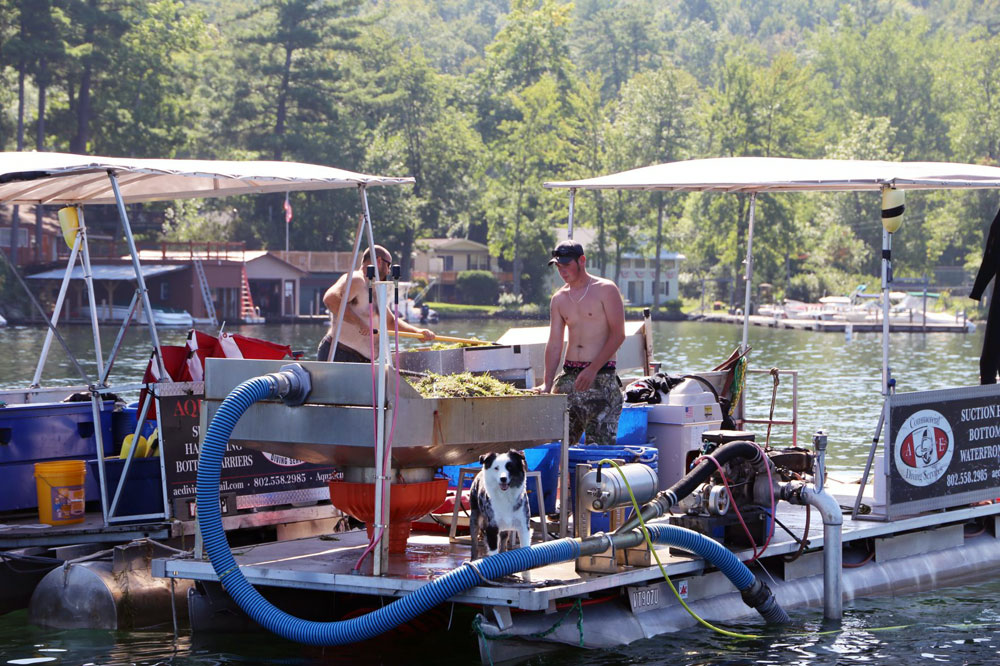 Members of AE Commercial Diving Services use a vacuum to suck up invasive Eurasian watermilfoil from Lake George on Sept. 5, 2018, off of Huletts Landing. (Provided photo — Gwendolyn Craig, The Post-Star)

LAKE GEORGE — It has been a conversation put aside for the past two decades, but the Lake George Park Commission could resurface an important invasive species management question.

Could herbicide treatment of Eurasian watermilfoil work in Lake George?

More than $6 million has been spent since 1988 on the invasive aquatic weed, and Wick now has a plan to spend close to $500,000 each year for the next three to get particularly thick beds under control.

But milfoil never really goes away, and Wick estimates it will cost about $200,000 a year following the three-year attack strategy just to maintain Lake George.

“Sadly, we have more years to come,” Wick said. “It is a wickedly fast-growing plant that can actually take over entire lakes.”

Wick mentioned an herbicide call Procellacor, which has shown to eliminate about 99% of milfoil in good conditions, with a 1% survival rate. On Loon Lake, for example, the herbicide was effective and most of the remaining plants were then hand-harvested.

“It’s still in the back of our minds,” Wick said about herbicide treatment.

He added that the chemical treatment would be a fraction of the cost of hand suction harvesting that’s currently done on Lake George.

Wick acknowledged the worry that can come with using chemicals in a drinking water source and that Lake George has a certain reputation as the Queen of American Lakes.

But, in certain bays where the plants are too difficult for even a diver to get to, it could be a helpful tool.

The Adirondack Park Agency, Wick said, appears to be open-minded about the possibility, though it had not been in the past.

The conversation and consideration around herbicides could turn to the public, but only likely after Lake George has tried its three- to five-year plan spending approximately $500,000 a year on hand suction harvesting. AE Commercial Diving, the contractor the Park Commission hires for the work, sends a diver and a vacuum hose under water. The diver pulls up the root of the milfoil and sucks it up the vacuum, along with any remaining fragments.

The program is funded not only by the Park Commission, but also by the Lake George Association, the Fund for Lake George and Warren County.

So how did 2019 go in milfoil management?

The worst site was Sunset Bay, where about 18,375 pounds were removed.

The management program has seen success over the years. Wick said Lake George used to have 20 to 30 dense beds of milfoil. Now, it has about seven.

Overall, herbicides or not, Wick hopes that within three years Lake George will have no more dense beds.

“We must continue to keep these sites in check,” Wick said. “We can’t just forget about them.”