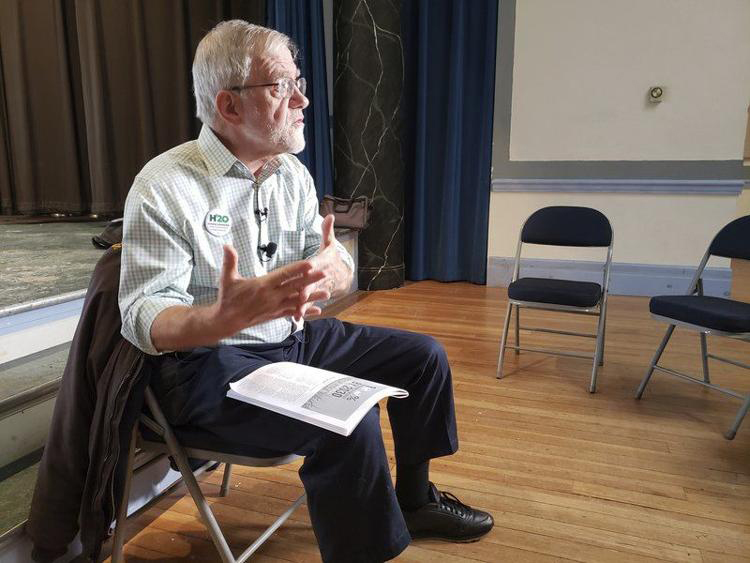 PLATTSBURGH — Howie Hawkins wants to get what he calls life and death issues injected into the 2020 presidential campaign discourse: the climate emergency, the inequality crisis and the nuclear arms race.

“I’m saying to the Greens … the chances of me being president are slim,” Hawkins said, “but we can make a big difference in terms of raising issues and getting ourselves in a place where we can start electing thousands of Greens to local offices across the country.”

Hawkins advertises himself as the “original Green New Dealer,” having run with the plan — whose name was popularized by Rep. Alexandria Ocasio-Cortez, D-N.Y. — as part of his platform during his 2010, 2014 and 2018 New York gubernatorial campaigns.

His version of the Green New Deal calls for the 100% reduction of greenhouse gases and 100% clean energy by 2030.

And the deal’s Economic Bill of Rights encompasses, among other things, guaranteed jobs and income above poverty, affordable housing, comprehensive health care for all, lifelong public education and secure retirement.

Hawkins said Democrats have taken the deal’s brand and diluted the content.

For example, they extended the deadline for greenhouse gas reductions and clean energy to 2050, which he contends is too late, and dropped the ban on fracking and new fossil fuel infrastructure.

With regard to the nuclear arms race, Hawkins is calling for the U.S. to pledge “no first use” and “unilaterally disarm to a minimum credible deterrent.”

“And, on the basis of those tension-reducing initiatives, engage the nuclear powers in serious nuclear disarmament negotiations for mutual complete disarmament,” he added.

On what would make it possible to get to 100% clean energy by 2030, Hawkins pointed first to making all electricity wind and solar, getting rid of certain manufacturing processes and transitioning to organic agriculture.

Hawkins argued for the electrification of transportation — which would also be powered by wind and solar — and the move from roads to rails for bullet trains between cities.

“There’s so much we need to do both in the immediate technologies like cement-making and the way we design our cities and this has got to be a publicly-planned, democratically-planned process,” he said.

“You just can’t throw some market incentives out there and expect us to get where we need to get.”

Hawkins believes the next president should declare a climate emergency on his or her first day in office in order to exercise the powers of executive action and get the ball rolling.

Hawkins’s website has an “Impeach Trump Now” section on the “Why I’m Running” page.

He has maintained that position since the day President Donald Trump took office, when he says Trump violated the foreign emoluments clause.

“And then, very quickly he started violating his oath of office to faithfully execute the laws of the country because of … the racism infused into his policies and the bigotry.”

House Democrats initiated the impeachment inquiry to answer the question of whether Trump conditioned military aid from Ukraine in exchange for investigations into former Vice President Joe Biden and his son Hunter during a July 25 phone call with Ukrainian President Volodymyr Zelensky.

“So my only question now, when they finally went after him for the Ukraine bribery is: What took you so long?” Hawkins said.

The Green Party is on the ballot in 21 states, including New York, leaving 30 remaining jurisdictions when you count Washington, D.C., Hawkins said.

That comes to 1.5 million signatures, he added, which the Green Party could obtain at about a dollar per signature.

But for the grassroots, start-up party, $1.5 million is a lot of money, Hawkins said.

Jacobs argues that this would get “sham parties” off the ballot.

But Hawkins said the Green Party does not fall into that category, since the Greens run their own candidates, do not cross-endorse Democrats and Republicans, and do not take special interest money.

“We’re a real alternative party. And this proposal is basically aimed at eliminating us.”

His message for those on the fence between the Democratic and Green parties?

“It’s better to vote for what you want than to have your voice lost in the sauce of the Democratic Party.

“If you’re a progressive or a socialist and you vote for a Democrat, they don’t know whether that’s the (Bernie) Sanders socialist vote or (Hillary) Clinton corporatist vote.”

Hawkins pointed to how he got 5% of the gubernatorial vote in 2014, which caught Gov. Andrew Cuomo’s attention.

“What were we talking about? A ban on fracking, paid family leave, $15 minimum wage, tuition-free public higher education.

“He moved on all those issues, not as far or as fast as we would like … because we made him compete for our votes.”

As of Thursday, the Federal Elections Commission had Hawkins listed as the top-raising Green Party candidate registered for president with $59,096.20 in total disbursements.

He feels he is the frontrunner for the party’s nomination, but isn’t taking it for granted .

“I’m campaigning hard, and I think we should be raising a lot more money.”

Hawkins is one of the co-founders of the Green Party in the United States, and said the party still exists because it is needed, not because it has good organizers.

Changing that is a goal of his campaign, and getting ballot lines will make it easier for people to run for local office and build the party from below, he said.

Hawkins keeps at it because he has been involved in a lot of movements that started with a small group before gaining popularity: protesting the Vietnam War, the anti-nuclear movement, the anti-apartheid movement, the ban on fracking in New York state.

“Sooner or later, things come together. That’s what gives me hope.”