Gillibrand, in Canton, plugs $50B in rural grants 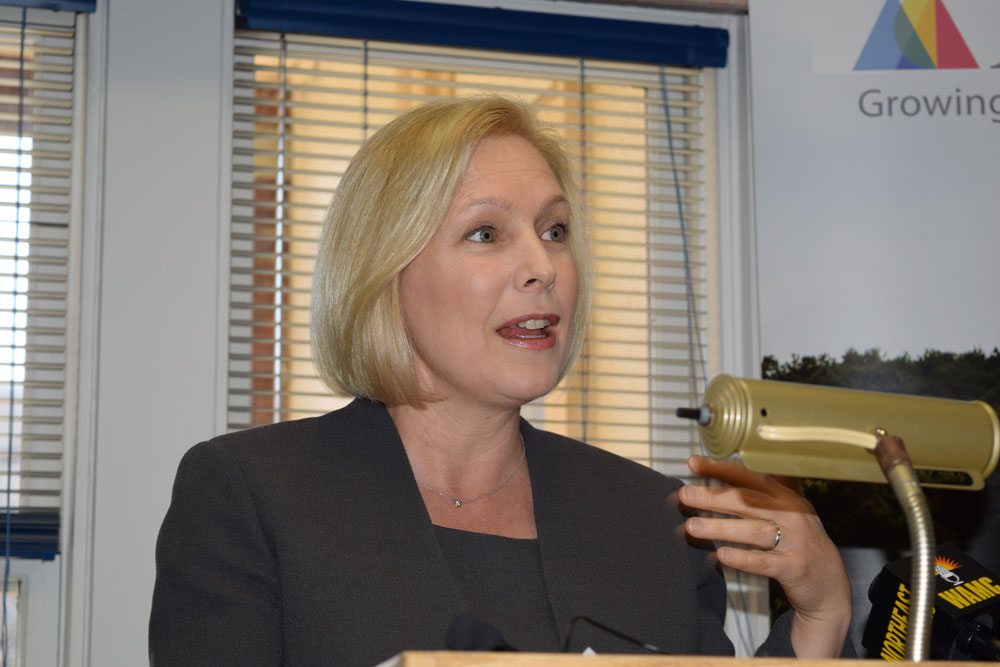 The symposium, held at the St. Lawrence University Eben-Holden Conference Center, filled the center with community members, businesses and civic leaders who Gillibrand encouraged to ask their local congresswoman to support the act as a “great piece of advocacy.”

The announcement was in step with the annual symposium’s theme, “Movement in the North Country,” with a focus on rural migration patterns and how community development can help attract businesses and residents to the north country.

The Rebuild Rural America Act would improve the way that the federal government supports development projects in small towns and rural communities in order to better fit their specific needs, she said.

“We really wrote this legislation back on the years of work that this group has done,” Gillibrand said. “The work we do, right here, at the North Country Symposium, to develop proposals and programs that serve our communities is really inspiring and deeply important, so I am grateful for the work that you guys do every day for the north country, and I will continue to partner with you, listen to you, use your ideas, lift them up and find common-sense, bipartisan solutions for every challenge you offer.”

Gillibrand said she is currently seeking that bipartisan support for the act, with co-sponsor U.S. Rep. Antonio Delgado, D-19, and believes she can urge Rep. Elise Stefanik, R-21, to support it.

Moreover, Gillibrand said she will be traveling with senators Joni K. Ernst, R-Iowa, and Shelley W. Moore Capito, R-W.Va., who she said she believed would support the proposed act, both coming from rural states.

“This is the kind of common-sense solution that really shouldn’t have a bipartisan edge,” she said. “This bill would help multiple places in New York, and I would be assisting all of those regions to apply for this money, and it is a generous program. It is a $50 billion program over five years, so that’s $10 billion just dedicated to rural America, and I think because we have such strong economic advocates and leaders in New York, we’ll get our fair share of those funds because we will be competing with other states, not amongst ourselves.”

The proposed bill would also apply to education and would create several programs.

Following the public announcement, a news release from Gillibrand’s office spelled out the act in more detail, stating federal grant funding is often inaccessible to rural communities and too inflexible to fully meet local development needs.

According to the release, if the bill is passed:

¯ Funding will be allocated proportionately based on the population of each region, with an increased allocation for regions that include areas that have a poverty rate greater than 20%.

¯ Empower rural community leaders by creating national capacity and training programs that will help connect the expertise and resources of the USDA and national and regional technical assistance providers with rural regions.

¯ Establish a state-by-state Rural Innovation and Partnership Administration to oversee this new program and offer hands-on help to local leaders.

“And last, it creates new capacity building and training programs that will help connect the expertise and resources of the federal government and national and regional technical assistance providers with your region,” she told the crowd. “So if somebody wants to become an expert in any of these fields, it will provide funds actually to fund that.”