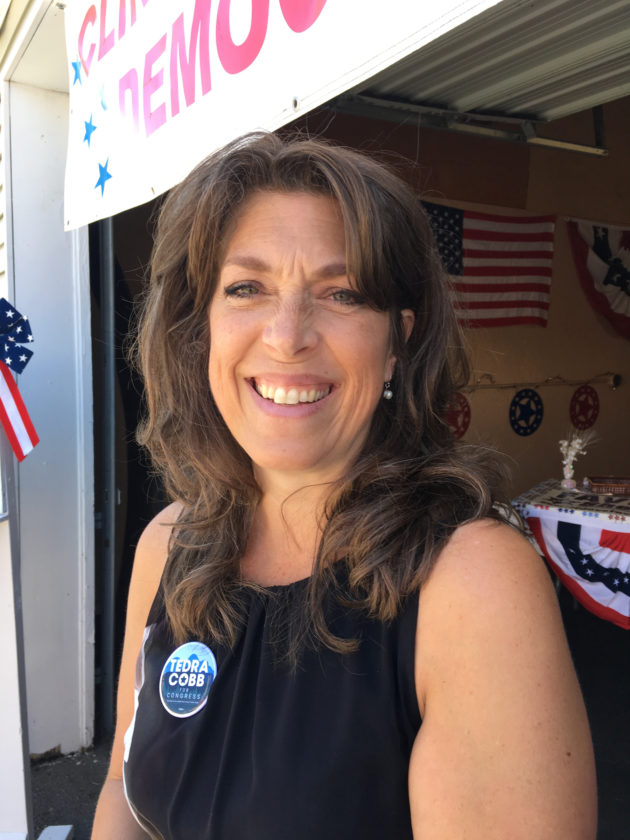 Democratic Congressional candidate Tedra Cobb of Canton took to social media Friday evening to tout donations to her campaign in excess of $100,000 in the hours following the second hearing in the House impeachment inquiry.

Her opponent, Rep. Elise Stefanik of Schuylerville, received national attention during the hearing as she questioned the conduct of panel Chairman Adam B. Shiff, D-Calif., and attempted to ask former ambassador to Ukraine Marie Yovanovitch questions during a period reserved for questioning from Rep. Devin Nunes, R-Calif., and his counsel. Nunes had attempted to defer his time to Stefanik.

“The gentlewoman will suspend,” Schiff said, interrupting Stefanik. “You are not recognized.”

The moment received attention from national media outlets, and Stefanik’s comments were retweeted multiple times by both the official White House Twitter page and President Donald Trump’s. In the hours following the hearing, The Washington Post described the congresswoman as “one of the GOP’s most effective messengers” as House Republicans attempt to undermine a probe led by Democratic members.

Cobb was largely silent on social media during the hearing, issuing a single tweet: “@RepStefanik’s partisan political theatre is beneath the dignity of her office. She skipped several important private hearings — now with the cameras on, she has repeatedly attempted to derail the public hearings. Stefanik should take her oath to the Constitution seriously. #NY21.”

She said her campaign received over $100,000 in donations from more than 4,000 individual donors in fewer than six hours following the hearing, and later claimed a total of nearly $150,000 from 6,000 donors. She said the average campaign donation was $25. During her first bid against Stefanik in 2018, Cobb had raised $706,508 throughout the entire third quarter.

Paired with the fundraising boost, Cobb gained more than 60,000 followers on Twitter in less than seven hours as Democratic strategists, like Adam Parkhomenko, rallied to push the candidate above 100,000 followers in wake of the hearing.

“This is the power of grassroots activism that @EliseStefanik and the @GOP mock,” Cobb tweeted. “Lets keep it going!”

Cobb wasn’t the only candidate fundraising off the hearing.

“Since I’ve exposed Adam Schiff and his #RegineofSecrecy in front of millions of Americans, far-left Socialist Democrats – like my opponent – are attacking me,” Stefanik tweeted. “They will stop at NOTHING to impeach @realDonaldTrump. Donate today to help us FIGHT BACK!”

Stefanik’s camp hadn’t posted fundraising totals as of press time Friday evening, but her call for donations had received more than 14,800 likes as of 10 p.m.