Cobb campaigns in Watertown as Twitter storm continues in D.C. 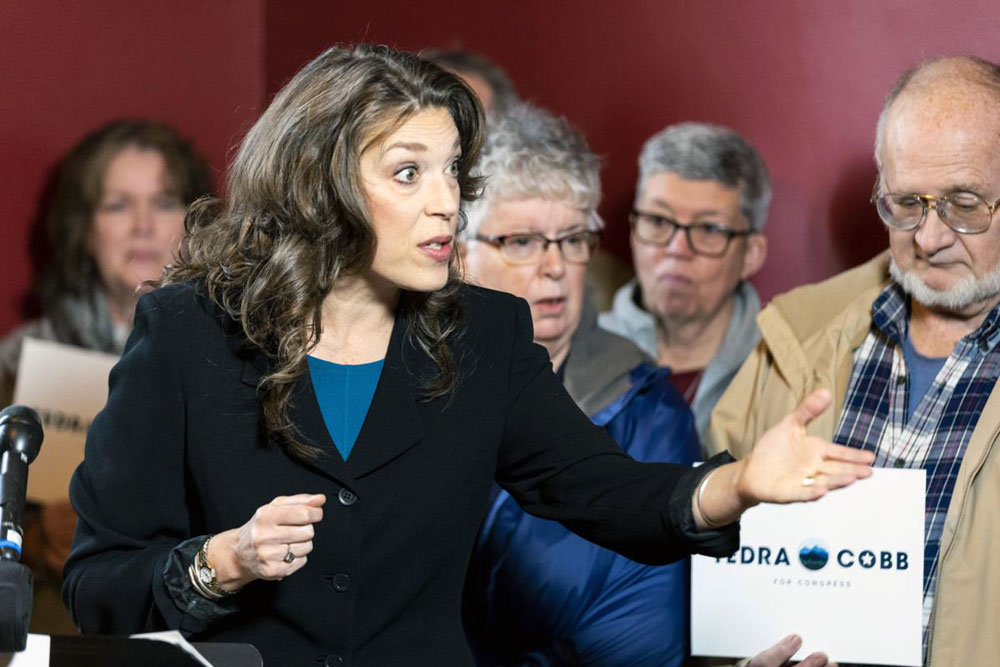 WATERTOWN — Tedra Cobb continued her campaign swing through the North Country Thursday with a stop at the Masonic Temple, where she continued her criticism of Rep. Elise Stefanik, who has taken on a central role in impeachment hearings.

Cobb, who attempted to unseat Stefanik in 2018, has shown a resurgence among Democratic voters this week after raising $1 million last weekend. Celebrities and Democratic politicians with large social media followings helped generate a bi-coastal wave of support after President Donald Trump acknowledged Stefanik’s support of him on Twitter. “A new Republican star is born,” Trump tweeted on Nov. 17.

In her message to supporters, Cobb spoke about her roots in the district. Her father, Ted, was a public school teacher for 32 years. She’s one of 11 children, nine of whom were adopted. Her mother, Barbara, was a nurse before she put her career on hold to raise her family.

Cobb, of Canton, said if elected she would focus on access to health care, vowing to “never cut a dime from Social Security or Medicare.” She said farmers and tourism and the overall health of the community depends on clean air and water. She spoke about her eight years as a legislator in St. Lawrence County, saying her accomplishments included passing an ethics law ensuring transparency in local government, lowering the cost of prescription drugs and helping families with home-heating assistance.

“We worked together to solve the problems facing our community,” Cobb said about her bipartisan legislation in St. Lawrence County. “I’m sure I don’t have to tell you that is not what’s happening in Washington right now.”

Cobb criticized Stefanik multiple times during the appearance. She said Stefanik spends her time outside of the Congressional district, recruiting candidates and raising money for her campaign.

“Stefanik is a Washington insider,” Cobb said, “but I have been here with you. I have been working with you and raising my family and just trying to make our lives a little bit better.”

“Is it incumbent upon Congress to remain objective and ask every question until the truth is found,” she said.

Just prior to the event, the Stefanik campaign launched an ad called “Taxin’ Tedra: The Toast of Tinseltown.” In it, her campaign credits “Hollywood liberals” with Cobb’s recent boost in donations. The ad shows a post on Twitter by George Conway, the husband of Kellyanne Conway and an attorney with nearly 790,000 followers. Conway, who’s often at odds with President Trump, called Stefanik “lying trash.”

“What was a tasteless tweet to most Americans, has liberal Hollywood elites like Rosie O’Donnell and Chelsea Handler pulling out their black card and clicking donate all the way from their multi-million dollar mansions,” a transcript of the ad reads. “Elise (Stefanik) knows that Hollywood money and blue-checked Twitter profiles don’t mean much where we’re from. Because this is the north country.”

Cobb responded to the ad by saying her average contribution per donation is $25.

When asked to characterize Stefanik’s performance in the impeachment hearings, Cobb said her opponent has not been independent, something constituents expect.

“The job of a Congressperson in these impeachment hearings is to be objective and to follow the truth wherever it might lead,” Cobb said. “It’s unfortunate that she has not done that.”

In response, Madison Anderson, a spokesperson for Stefanik, said the Congresswoman has worked to deliver results for NY-21, citing the delivery of grants from the USDA and DOT. And as far as the impeachment hearings, Anderson said and Stefanik has done her job.

“Congresswoman Stefanik has asked some of the most effective and widely praised questions of any committee member,” she said, “focused on anti-corruption, security assistance and defensive lethal aid to Ukraine, the importance of countering Russian aggression, and the importance of taking this impeachment process seriously as a constitutional matter.”

Cobb said she has “barely taken a breath” ahead of her campaign tour to consider the specifics of what she’s going to spend her recent donations on.

Cobb said accessibility and transparency will remain a priority.