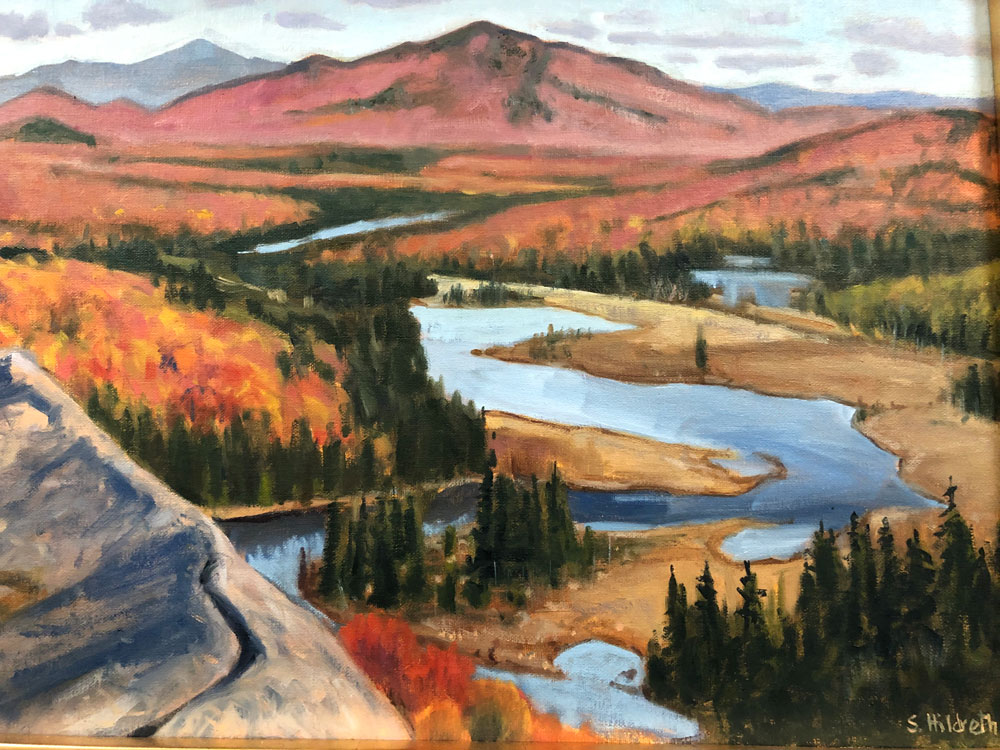 This a plein air painting was made by Adirondack artist Sandra Hildreth, whose show “ M O U N T A I N S” opens Friday, Oct. 4 at the Adirondack Artists Guild Gallery. Works like Hildreth’s will be created all week in Tupper Lake by plein air artists during the festival.

For six days artists will paint, exhibit and sell their pieces, capturing scenic locations and vistas around Tupper Lake.

The Tupper Art Center will host a preview reception, where the public can view and purchase any of the artwork created during the festival, Friday, Oct. 11, at 6 p.m. Wine and local cheeses will be available during the event, and tickets are $10.

This is the third plein air festival ADK Action — a nonprofit community advocate — has helped host, along with ones in Saranac Lake and Keeseville, which are held in the summer. ADK Action Executive Director Brittany Christenson said the idea for the Tupper Lake festival came about to fill a void for artists and highlight the changing seasons.

“Lots of artists who worked in the other two festivals wanted an event in the fall, so they could paint the changing leaves,” Christenson said in a phone interview Monday. “One of ADK Action’s main project areas is promoting local artists. We were really impressed by the Tupper Arts Center’s efforts to strengthen that part of the community in the last year.”

Twenty artists are set to participate in the festival, Christenson said.

The festival is split into three different sessions — paint the water, paint the town and paint the landscape.

Tupper Lake offers a variety of architectural structures, new and old, along with revitalized streets and storefronts that invite artistic interpretation. The gazebo at the municipal park, the Sunset Stage at Flanders Park, Beth Joseph Synagogue and the Oval Wood Dish factory buildings are all landmarks which add special touches that help define the history and spirit of the town.

Tupper Lake is home to some of the most scenic views in the Adirondacks. From the top of Raymond Hill on Route 3 entering Tupper Lake from the west, to the panoramic display of the Seward Range behind LP Quinn Elementary School, to views of Mount Morris — home of Big Tupper Ski Area — from several locations along Raquette Pond, artists are rewarded with an array of Adirondack vistas.

Tupper Arts Center Board Member Sue Delehanty said the center has been positive for Tupper Lake since it was created in 2018.

“I think it’s had a tremendous impact,” she said in a phone interview Monday. “We’re on Park Street, right on the main drag, which is a big draw for people to stop in an see an exhibit. We’re also attracting a lot of people outside the area who are interested in showing their work.

“I think people don’t often think of Tupper Lake as an artist community, but we have lot of amazing people with plenty of talent, and we’re glad to finally have a place to showcase their work.”

“Tupper is seeing a real renaissance downtown, and arts is a vital part of that,” she said. “The Tupper Arts Center is achieving that success between classes and workshops and a lot of youth outreach. The arts has a multiplier effect on the economy and tourism. We found that every dollar spent on arts equates to $3.60 on food and lodging in the community. So there’s a good economic impact. Art also makes us happy. People are proud to live here, and I think it’s great when residents are given the chance to see their community through the eyes of artists.”